Game Play: These should fill the summer drought 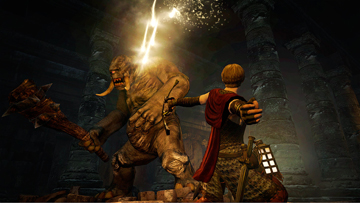 Though predominantly the terrain of blockbuster movies, this summer will see the release of a small collection of games that look quite promising.  To close out the semester, I’d like to briefly outline my most anticipated games of the summer.

Starting the summer off right is “Dragon’s Dogma” from Capcom, releasing less than a week after the end of the semester on May 22, and likely to be my favorite release of the summer.

This open-ended epic RPG will be new territory for Capcom, yet from what I’ve seen they have taken many steps in the right direction to mix the tried-and-true staples of the genre (questing, class archetypes, loot, character progression) with a few additions of their own such as the heavy emphasis on teamwork.

Players will work with a team composed of various skill sets to combat and interactive with impressive looking adversaries such as griffons, golems and of course, dragons, in a number of innovative ways — such as scrambling atop them “Shadow of the Colossus” style or dispatching them while a member of your team holds them steady.

I’ll be looking forward to this one more than any other in the summer months.

“The Amazing Spider-Man” releases June 26, coinciding with the movie releasing a few weeks earlier.  While some may believe this inclusion to the list is due to a lack of noteworthy summer games, I’m happy to say that’s not the case; I’m actually, genuinely looking forward to this game.

This may be surprising considering the constant bombardment of bad Spider-Man games that have plagued the gaming universe. There hasn’t been a good Spider-Man title since “Spider-Man 2” (though admittedly I did not play much of Spider-Man: Shattered Dimensions,” which some people seemed to like), and thankfully this game seems to more heavily favor that game as opposed to the others.

No more symbiotic Wolverines to fight, kiddy partnerships with Spidy’s nemeses or time-travelling. “The Amazing Spider-Man” is taking us back to the basics: fighting giant robots in the middle of New York City. Okay, so maybe that’s less canon than fans would hope for, but it still looks good.

Also a plus is news that the game will take place after the events in the movie instead of paralleling it, which does wonders to free developers from the constraints of having to rehash a 2-hour movie into a 12 hour game. Though the developing studio, Beenox, is the same responsible for many of those debacles I mentioned, I have high hopes for this one.

“Transformers: Fall of Cybertron” releases August 28 and promises much of the same Autobot versus Destructicon warring featured in its predecessor, “Transformers: War for Cybertron.” Transformer fans were (for the most part) pleasantly surprised with the quality of  High Moon Studios’ first crack at the popular animated series, released in 2010. Finally, fans were treated with a Transformers game that was not only worth playing but also satisfying, pushing players through an adequate story campaign playing as both sides as they duked it out on their homeworld.

Included in the sequel will be another element from the show: Dinobots. Fans of the show will recognize this playable race of fearsome robotic dinosaurs allied with the Autobots. In the game this translates to fire-breathing, robot-chomping action once players transform into their prehistoric countparts, and it looks awesome.

Towards the end of summer and a few days after the start of the fall semester the much anticipated “Far Cry 3” will drop, officially releasing Sept. 4. While details are scarce for the time being, the little that I have seen of the game looks mouth-wateringly delicious.

“Far Cry 2” was fun and took immersive detail to a whole new level, but was far from being without a few shortcomings. “Far Cry 3” looks to correct many of these mistakes — such as eliminating respawning checkpoints and improving multiplayer — as well adding a few new features to further increase the immersion.  While “Far Cry 2” was beautiful, “Far Cry 3” pushes the bar further higher and looks absolutely gorgeous, raising the standards of first-person immersion.

So for those twiddling their thumbs waiting for the big drops coming in the fourth quarter of the year, there are other options in the meantime. Afterall, at least one of them has got to be good, right?