A graphic novel that you control 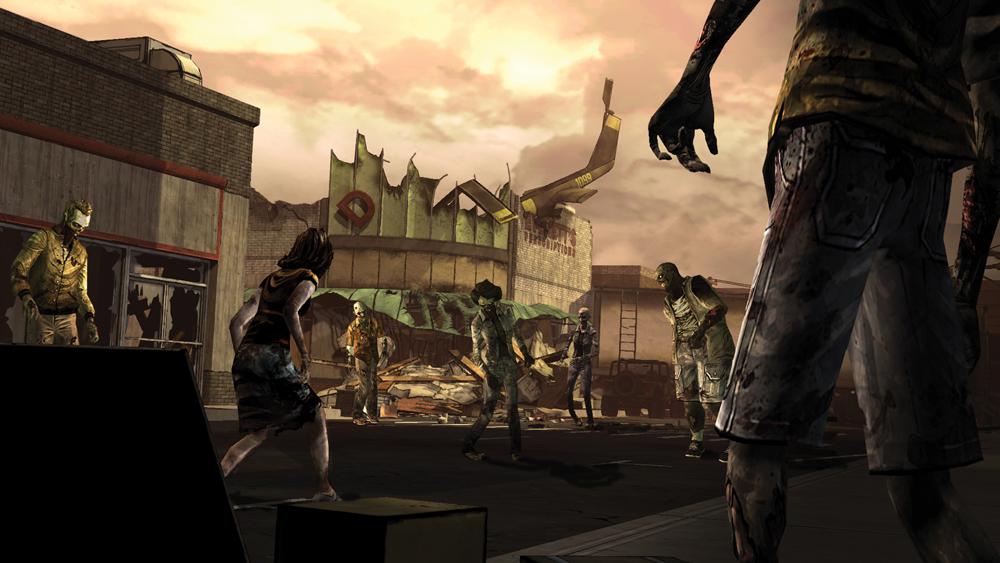 Ah, summer. A great time to catch up on neglected, but not forgotten video games, movies, and reading (graphic novels, of course).

In the world of video games, however, this summer is reminiscent of a post-apocalyptic wasteland, with little to no life-sustaining blockbusters, and leaving us gamers to resort to digging through the bargain bins just to survive the lack of new releases until winter.

Luckily, I was able to scrounge up a few great titles during the drought, and being a fan of Robert Kirkland’s “The Walking Dead”  I was elated to find that he had developed a game based on the highly acclaimed graphic novel series.

The game expands on “The Walking Dead”  universe, and since April 25, has been released episodically online, with three episodes currently available and two more on the way.

“Episode 1: A New Day” begins with a man, Lee Everett, in the back of a police car on his way to prison. While Lee and the police officer exchange small talk and a bit of backstory, helicopters and police cars scream toward the city behind them. Eventually, disaster strikes and Lee is set free to figure out what is going on and survive.

Lee eventually meets a young girl, Clementine, hiding from the unfolding nightmare in a treehouse. After asking some questions, and a gory encounter with the former babysitter, Lee eventually convinces Clementine of his honorable intentions and they decide to stick together and move on.

“The Walking Dead” game, much like the rest of Kirkland’s series, focuses on practical survival scenarios, character development, and the necessity of maintaining relationships in order to survive in a bleak and hostile world.

This game holds true to these thematic elements, requiring you to make decisions on how Lee responds, reacts and decides in an ambiguous, hostile world.

How do you find food? Do you go out at night, or during the day? Shoot a stray zombie, or keep quiet in order not to attract the hordes? Everything is up to you.

Not all of the decisions are based on whether or not you should eat the last energy bar. Lee and Clementine meet and team up a host of characters, and how you respond to their questions or what you tell or withhold is also up to you. Lying to someone now may have consequences down the road, or choosing to stick up for someone may give you a loyal ally.

Several of the choices further into the game are of the “lesser of two evil” types, and the time constraints on making a choice results in a sense of pressure, causing me to make a decision on a gut feeling, and leaving me wondering if I made the right choice later on.

Trust, loyalty, sacrifice, and hope are central themes throughout, and being able to direct the story through a “what-would I-do” level of interaction made it instantly engaging and fascinating for me. I also enjoyed the stats at the end of each episode, which gives a breakdown in percentages of the choices other gamers made at crucial plot points against your own.

All of the characters are well written, with all characters having strengths and flaws, and the terrific voice acting helps make the situation more believable. A few characters from the first season of “The Walking Dead” television series make cameos and fans will notice several nods to the series at large.

The visuals in the game are reminiscent of the artwork from the graphic novels, and looks beautifully gritty throughout.

It is similar to watching a motion-capture comic, as everything has a detailed, hand-drawn style to it, yet the animations aren’t fluid like a top-quality CG game. Nevertheless, it drew me in and paid homage to the graphic novel series.

Most of the game-play consists of moving Lee around a given environment and interacting with people and objects. Puzzles are pretty straightforward, usually consisting of searching for a few items and figuring out how they will help the situation, such as finding a remote control to turn on an array of televisions in a storefront window, in order to draw the zombies attention so as to escape. I would have liked a few more puzzles that were less obvious, but while the game-play is lacking, the real meat is in the story.

While it has a strong story narrative, this is not an experience like many other zombie games on the market. This game is much more akin to watching a three-hour interactive graphic novel, than a “Left 4 Dead”-style frantic zombie slaughter-fest.

Finding a gun didn’t make me feel safer, but rather that I would have a tough choice to make in a few minutes. That being said, there are plenty of gripping, tense moments that fit right in with the genre, and the mature rating is well deserved.

“Episode 2: Starved for Help,” and “Episode 3: Long Road Ahead,” look, play and feel like “A New Day,” with the only real difference being a progression of the unfolding story. The stakes are raised in the later episodes, and now that I knew and cared (or hated, in some cases) more about the characters, decisions became harder (or easier) to make.

As the plot gets much darker, and much like the series, I began to question what I would really do in those circumstances. Anyone can say what they would do in real life, but to be presented these choices and having to decide allows for a whole new level of depth in the zombie-survival genre.

For fans of “The Walking Dead” series, this is a no-brainer. Even if you are not an avid gamer, let alone ever having picked up a controller before, this is a highly accessible game for anybody. My friend watched me play through an episode in about 3 hours, and said she was engaged throughout.

As I said, this is more of a kick-back, late night game to relax to, as opposed to a caffeine-fueled marathon game.

Each episode runs about $5, and is available on Xbox Live Arcade, PlayStation Network, and PC. Be warned: if you play through the first episode, which of course leaves you with a cliffhanger, be prepared to shell out the extra $10 to find out what happens to Lee and Clementine. However have hope: by the end, you will be satisfied with your choices, and be anxiously waiting for Episode 4 like me.