Dub ‘affects’ the crowd of 4th and B 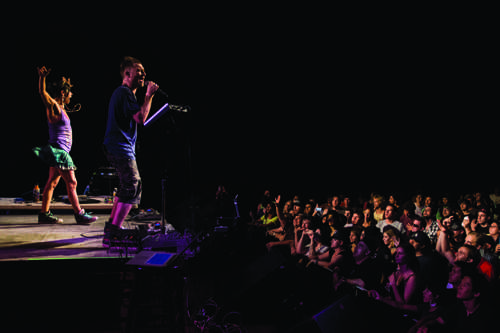 Artists Dub Fx and Flower Fairy perform for a packed house in their Sept. 30 performance at the 4th and B Concert hall. Troy Orem, City Times

Fans of Youtube phenomenon DubFX lined up to see the Australian performer take the stage in downtown at the 4th and B concert hall on Sept. 30.

Armed with nothing but his voice, a Boss RC-50 Loop Station and GT-10 effects pedal, DubFX enchanted the audience at the show, his only tour date in Southern California.

To people who are unaware of the uniqueness of his music, a simple description of the show doesn’t do it justice. He uses his own vocals to produce beats and music and then adds his original lyrics over the music that he has created. There are no instruments, just his vocal chords and creativity.

One simply has to see to see the man live, and watch and listen as simple beats, and sounds are relayed through the microphone into the loop station to become an intricate song.

Although the performance was slightly delayed, opening act Stereophobe kept the crowd entertained with an extended set.

Before he took the stage at 11:30 p.m., DubFX helped with the set-up of all of his gear, a rarity in today’s world of professional musicians. He was not only active with set up, but seemed to be genuinely excited by his fans that were in attendance.

DubFX was not alone during his performance though, accompanying him were two other artists, Flower Fairy and J.D. Wolfrobe, who also entertained the crowd with their equally unique blend of musical talents.

Part of what made this concert really special was the high energy of the crowd. With audience participation encouraged by all performers, fans were able to actively engage with the artists.

Fans cheered as he performed “Love Someone,” one of his best known and most loved compositions.

His set-list included about ten songs.

For more information on DubFX and tour dates visit www.convoyunltd.com

For more photos and video of the show in San Diego visit www.sdcitytimes.com.