‘Shop of Horrors’ is ready to make audiences laugh 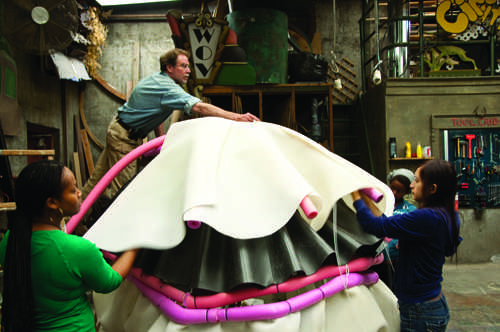 Director June Richards said she wants City College’s production of “Little Shop of Horrors” to reintroduce humor to theatergoers with its satirical vision of the late-’50s to early-’60s paranoia.

“What we’re doing right now is trying to work against so many of the elements that I think are creating a lack of humor cult: this economic challenge that everybody faces on a daily basis,” said Richards, who is co-directing the play with Alicia Rincon, a choreography professor at City.

“It’s really a satire, a kind of take-off of everything that was going on in the ‘50s and which people were really frightened of,” said Richards, “You think of all the films that were there to scare people.”

The musical, set mainly in New York’s “skid row,” centers around main character Seymour, an amateur botanist who happens upon a man-eating plant, that apparently arrived from outer space after an unprecedented total eclipse of the sun. As the plant grows so does its notoriety with the public, leading to a snowball effect of mass hysteria and Seymour’s mounting terror at the plant’s grim potential.

But if audiences for Frank Oz’s 1986 film adaptation of “Little Shop” saw a tie between the plot and the shadows of early ‘60s America, (the red scare, fluoridation and nuclear apocalypse) then contemporary audiences of City’s production may derive added irony from the squalor of the character’s lives in a period which simultaneously conjures thoughts of material prosperity, and the American dream.

Richards maintained that the common denominator will be the show’s humor.

“It has a sense of humor, it doesn’t have a point of view,” she said.

Diego Valdez, 21, plays the role of Orin Scrivello D.D.S., in his first appearance in a City production.

Valdez looks promising in rehearsal as Orin and adds new dimensions to the duplicity of that character, as seen during one of the shows most well-known numbers, “Dentist,” in which Orin reveals his professional success as a dentist is owing to his inherent sadism. Valdez gives a rough and raspy delivery through a nefarious grin, which betrays the character’s pretenses to respectability and further gives him the aspect of a common shyster.

Valdez said he conceived Orin’s accent as that of a southerner who has moved to New York, and it succeeds in bringing out the falsity of that character, a kind of hustler who has donned a dentist’s smock, making him both reprehensible and hilarious.

Seymour is played by Oliver Willcox,  paired off with Loraine Odierno as Audrey, Seymour’s love interest. Willcox plays Seymour with a great deal of naivete while Odierno plays up Audrey as the nasally ingenue, not a worthy love interest, but simply the most attractive girl available for Seymour to pine over. Part of the humor comes from watching the two characters fail to make a meaningful connection, while those around them, from lacking in guile, scramble for personal gain.

One such character is Mr. Mushnik, played by Darik Houseknecht, 26, also making his first appearance on City’s stage.

“The only two characters that are decent in any way are Audrey and Seymour,” Houseknecht said, “All the other characters are using them.”

Audrey, the carnivorous plant, also a character in the play, will appear as a series of increasingly larger puppets as the plot progresses, with its final incarnation being large enough to fit an actor inside who will control its movements.

City stagecraft professor Duane Gardella designed the look of the puppet while Max Daily, a former California Institute of the Arts student, handled the mechanical design.

The puppet will be voiced by Tandy Ward, interim dean of student affairs at City. Darwin Browne, a student services assistant at City, will operate the puppet.

Ward has previously appeared in City’s theater productions, most notably, he recalled, as the Lion in “The Wiz,” also directed by June Richards.

“Even though the plant is an alien, I try to humanize him a bit with a soulful sound,” Ward said of his plans for the role.

A difference between this production and the 1986 film version is the ending. Frank Oz was forced to change the ending for his film when the original was not well received at previews, but Richards said that the theatrical version possesses its own charm.

“It’s so silly in the theatrical version,” Richards said, “In other words, no kid is gonna run out screaming and saying ‘oh my gosh, what are you doing?’ because it’s just a total satire.”

Tickets will then be $10. The play will run every weekend until Nov. 11.