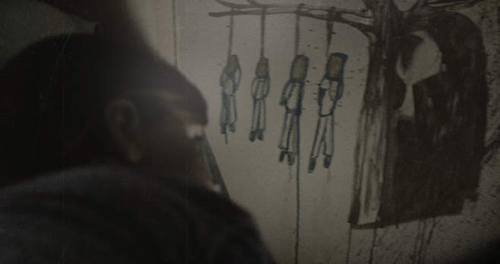 “Sinister” might do some harm to a sensitive psyche.

Released Oct. 12 to audiences nationwide and directed by Scott Derrickson, this film starred Ethan Hawke as protagonist Ellison Oswalt, a true crime novelist who moves into a town where a young girl disappeared in the ‘70s. As he tries to uncover evidence about the disappearance, he finds a series of Super 8 films that take him on a much darker journey.

As Hawke’s character watches the grotesque scenes on the films, from which creaks the grainy back tingling sound of the rolling film, he discovers more about the 1970s case, and many other cases on separate videos he finds. He soon realizes all the children in the videos disappeared while their families were murdered. His search for the murderer takes him toward a conclusion that is much more “sinister.”

From the opening scene, the audience has to watch one of the videos Hawke finds, a long and disturbing scene that begins black, with only the sounds of the projector running. From there, the pendulum starts swinging. At the beginning of the movie, the blade already touches you, taking a little bit of your comfort away, but not quite “killing” the viewers with its brutality. There was actually little blood in the movie, but the images from the Super 8 films implied all the gore that occurs in the films.

There is a series of shots and angles that give off the old-school way of directing a horror, like the shot of a character’s face to the side while still giving the audience a clear shot of the background, waiting for a creepy face to pop out which did happen on occasion. The torture was in the anticipation. One scene in particular was a staircase dimly lit by the projector in the room above it, its grainy sound of the reel running being the only thing Oswalt hears down the hall. He very slowly walks up, the very scene in which audience members would beg “don’t go up the stairs!” Intense and long, everyone in the theater could only clench their arm rests and wait for the climax, the pivotal moment in which the pendulum swings full force for its most painful blow yet.

Sounds effects weren’t bad either. As was brought up several times, the projector’s gritty and uncomfortable sounds gave the movie its flavor. The tribal-like music that made up the soundtrack was a giveaway that the mystery would not be within the realm of the normal, but rather the dark and evil supernatural world, reminding us over and over of how disturbing this film was becoming. Derrickson effectively used the silence in-between scenes to add suspense, the same way “Paranormal Activity” used the silence to make the audience wait agonizingly for the demon to make an appearance.

The end of the film really nailed it, giving new meaning to the idea of using a red herring to create a good twist. No spoilers, but many moviegoers were surprised by how the mystery wrapped up, and the conclusion the film had. Essentially, many of the elements of the film threw viewers for a loop. It was the final blow, the cut that killed us off, and it was well-timed. Any longer, and the movie would just be unbearable.

Overall, “Sinister” was well-executed in its imagery, cinematography and storyline. Derrickson didn’t attempt to change up the old-school horror movie style or over-elaborate on the storyline, but rather left it alone and let the film be a good old-fashioned thriller.

It is a film well worth the price of an average AMC ticket. For the hardcore horror flick fans, it holds up the genre’s standards without trying too hard for a scare (you might not be as disturbed but rather just feel a little creeped-out afterwards). As for those who are of the faint of heart, go with a friend. Or a couple.