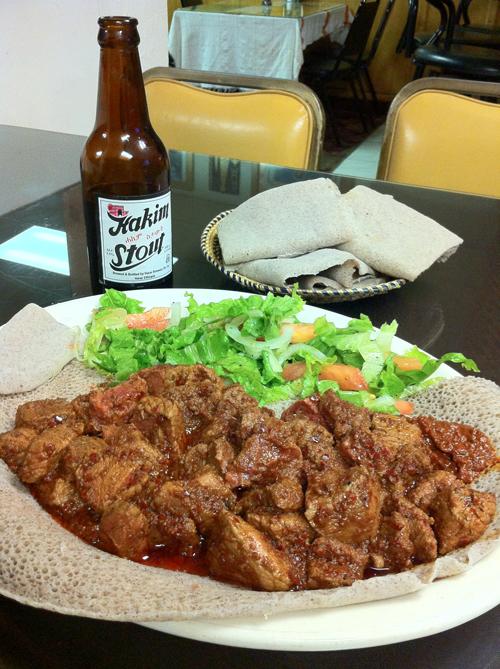 Has anyone ever considered that for the first time in human history, we are fortunate enough to eat food from almost any culture anywhere in the world, without even leaving our city? Today, my taste buds will be traveling to one of the oldest civilizations in the history of the human species: Ethiopia.

The Red Sea in City Heights is small restaurant but it’s comfortable and welcoming. The first thing I noticed when entering was the strong aroma of Eastern spices. Behind the counter of the bar in the corner, an Ethiopian woman was roasting coffee beans in a saucer-type dish, from which an aromatic smoke filled the room.

I was surprised to see dishes of lamb and beef on the menu, because I did not think meat was popular in Ethiopia. The country is predominantly Eastern Orthodox Christian with a large Muslim population, and neither religion allows for the consumption of pork or shellfish. Fasting during lent and every Wednesday and Friday of the year is common, and during these times animal products can’t be eaten.

I decided on a plate of the “Gored Gored,” which was described to me as very rare cuts of cubed beef marinated in mitmita, which is like a chili powder, and niter kibbeh, a clarified butter infused with garlic, ginger, and other spices.

I ordered a stout beer called Malik that is imported from Ethiopia. I was skeptical at first, as I usually am with beer from countries that are not well known for the fine arts of brewing. In this case I was impressed. It had a flavorful, but not overpowering taste, with clean tasting ingredients and a crisp and refreshing body.

The Malik was balanced and stayed true to the vital elements of good beer.  Beer should have flavor, and this flavor should be noticeably signature, distinguishable and sophisticated, but not overpowering to the point that you sacrifice the refreshing qualities.

When the food arrived I tore off a piece of injera, which is a spongy Ethiopian flatbread made of fermented teff flour, and used it to pick up the a piece of food. Traditionally utensils are not used at all, and the server did not offer them.

After taking the first bite, I realized that my request for medium-rare beef was either ignored, forgotten, or that “medium-rare” by Ethiopian standards means cooked under a light bulb. The meat was raw and chewy! The marinade was flavorful, spicy and tasty, but the beef was hard to eat. It was so chewy that I could tenderize the large chunks of cow flesh, but they would not break down to small pieces that I’m accustomed to swallowing.

I like sushi and I like a rare steak, but to me rare steak is cooked on the outside and pink or even red in the middle. This meat was blue, purple and cold. It was the most gory meal I have ever eaten.

Since I have survived the digestive process without displaying any signs of E Coli or salmonella, I have come out of this a more cultured and traveled individual.  Plus, if I’m ever in an airplane accident and find myself trapped in the mountains with a group of survivors and we run out of food, I’ll have an advantageous tolerance for raw meat.