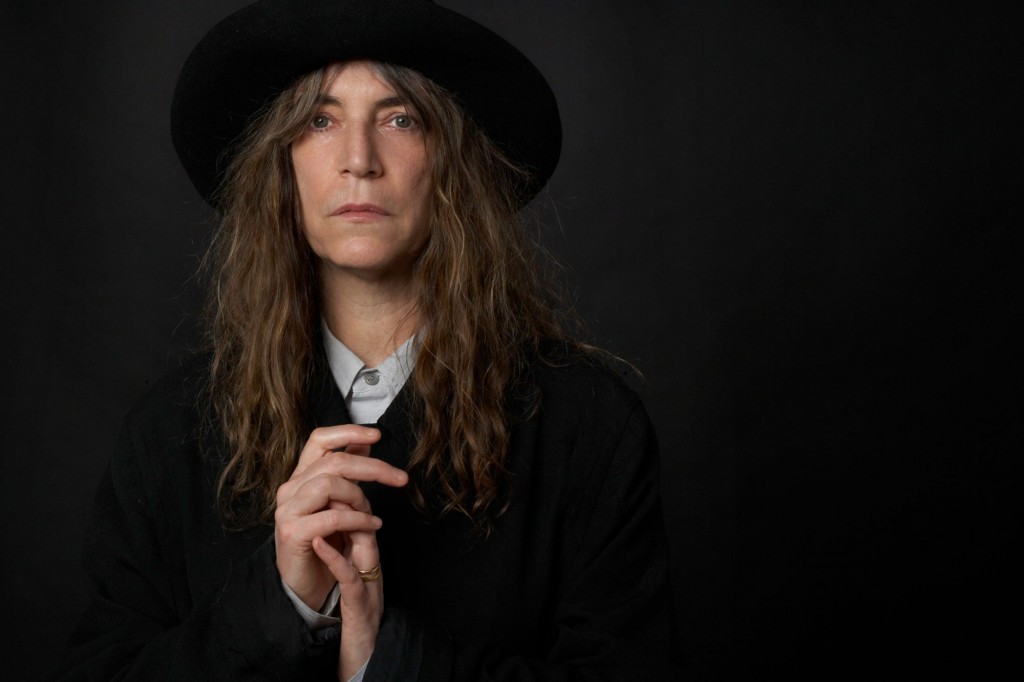 A renowned figure in rock and roll – nicknamed the “Godmother of Punk” – who propelled to fame in 1975, Patti Smith returned to San Diego for “Downtown with Patti Smith” at Spreckels Theatre, an event that ended an eight-year absence from San Diego, her last appearance being at Street Scene in 2004. She spoke about her life and performed the songs that helped her inspire generations of musicians, artists and fans.

Smith, an inductee into the Rock and Roll Hall of Fame in 2007, began the evening with readings from her 2010 National Book Award winning autobiographical novel “Just Kids.” These included small recollections of her life while living in New York City during the 1960s and 1970s with her longtime friend and former lover Robert Mapplethorpe.

The musician recalled stories of her meetings with famous writers such as Allen Ginsberg, whom she says once mistook her for a “pretty boy” and bought her a sandwich, and also spoke about her time with other musicians, detailing her run-ins with those who changed the 1970s. She mentioned being in the same bar as guitar legend Jimi Hendrix, spending time with singer-songwriter Janis Joplin, and even what it felt like to hear her own song on the radio for the first time.

Music followed each excerpt, and story was built upon story as Smith accompanied every tale from her past with a song. With Jay Dee Daughtry and Lenny Kaye on guitar, she played rock hits like “Because the Night,” which was produced by Bruce Springsteen.

Smith even dedicated a song to the late Amy Winehouse, called “This Is the Girl,” and referenced a poem to Edie Sedgwick as a tribute to both fallen icons. “My Bleakean Year” was also performed as an ode to her favorite writer William Blake.

Much was spoken about Mapplethorpe during the event. A few audience members could be heard crying as Smith read a few of the last passages of “Just Kids,” recalling the final days she spent at his bedside. At the end of the story she sang a beautiful ballad dedicated to him called “Memorial Song,” a poem that was also published in her book. The love they shared was apparent as she sang about his emerald green eyes and accepting his death: “Little emerald soul, Little emerald eye, Little emerald bird, We must say goodbye.”

Smith, despite her legendary status, despite her accolades, remained humble. As fans screamed out “You’re awesome Patti!” or “We love you!” she shied away and hid her face, seeming to never take in the enormity of the moment or accept that she is truly inspiring and iconic, a living legend of our time.

Nearing the end of the show, Smith opened up a question-and-answer session to the audience, who reacted with overwhelming participation. Fans asked about her plans for a new book, her advice to the future generation of artists and even her thoughts on the imprisonment of Russian feminist punk band Pussy Riot.

A self-proclaimed “insane note taker” who writes every single day, Smith said writing “Just Kids” took her 20 years to complete and was done with the help of the hundreds of journals she keeps on bookshelves at her home. She teased the audience by saying that she might write another novel but “… It has to feel right.”

Smith closed her inspiring reading with an incredible rendition of “People Have the Power,” proclaiming: “People have the power, the power to dream, to rule” with the entire audience singing and clapping along.

Anxious fans also lined up inside the Spreckels Theatre lobby after the show for a chance to meet Smith during a book signing.

Smith continued her tour with a second date at the House of Blues the following evening, presenting “Patti Smith and Her Band” for San Diego’s 21 and up crowd. The concert topped off a truly special and inspiring weekend of art, words, and music from a living rock icon.