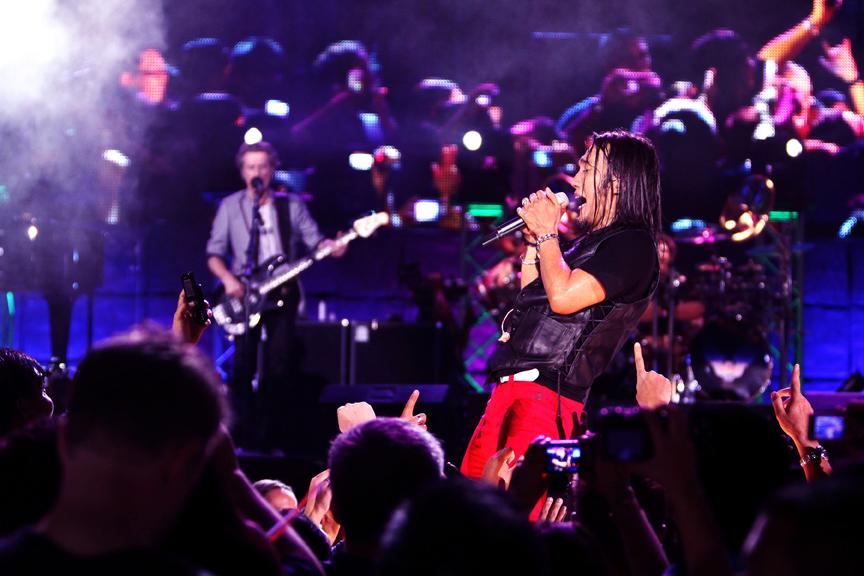 This year’s San Diego Asian Film Festival included a collection of colorful films that together reflect the diversity in Asian filmmaking and especially Filipino cinema today.

“Don’t Stop Believin’: Everyman’s Journey’” has spent much of the year on the road, closing the San Francisco International Film Festival, receiving the Audience Award at the Traverse Film Festival, and serving as an Official Selection at the Tribeca Film Festival. In San Diego, it proved so popular that additional screenings had to be added to keep up with demand from audiences.

Director Ramona S. Diaz, herself Filipino, follows Arnel Pineda, whose life is transformed into a rags to riches story after legendary rock band Journey discovers him on YouTube in 2007. The discovery takes him from the streets of Manila, where he was homeless for some time, to the U.S. Pineda now fronts the band, taking over the spot vacated by the original lead singer Steve Perry. Albeit a little too long, with a running time of just over 2 hours, “Believin’” will leave some moviegoers restless, but everyone will be inspired.

Using social media as a launching tool to gain notoriety has become a stepping stone for some in the Asian community, something that has not gone unnoticed by the festival, who highlighted the importance of social networking with the film “Uploaded: The Asian American Movement.”

“I’m an atheist but being Filipino, I grew up with tons of ghost stories and I really wanted to write one of my own from a perspective that speaks to sensibility,” said writer and filmmaker H.P. Mendoza in an interview with sdaff.org.

Mendoza, who has a background working in musicals, comes to the festival with two equally eccentric offerings. A horror film titled “I Am a Ghost”  marks his second time being a director, and “Yes, We’re Open,” a romantic comedy that he both wrote and starred in.

“…I kind of like forcing Asian faces on people. I’m more concerned with getting the Asian American face on the screen,” said Mendoza. “I know that I have a bunch of scripts that call for white characters (and I won’t shoehorn racial identity politics into those films), but visibility is important to me and I want to prove to people that Asian American faces do sell.”

Ron Morales is a veteran of the festival, having won Best Narrative at SDAFF in 2008 with his film “Santa Mesa.” He returned this year with “Graceland,” a suspenseful and entertaining thriller that he says derives inspiration from news articles and his own field research.

“The Philippines has a great pool of talent to choose from. The caliber of actors and crew members is on par with the rest of Hollywood,” said Morales. “You also feel this raw and vibrant independent spirit of filmmaking with the community in the Philippines.”

Earlier this year the San Diego Film Foundation, the non-profit organization that has produced and overseen the festival every year since it’s inception, changed its name. This year the festival launched under the banner of the Pacific Arts Movement.

“We needed to distinguish our organization from the film festival,” operations manager Philip Lorenzo told KPBS, “And this name change reinforces and reminds that we really are a year round organization…”
“And Pacific Arts Movement really does reinforce the idea that we are open…this is in fact a very diverse, very inclusive organization that welcomes all walks of life, all sorts of genders, ethnicities, orientations, everything is welcome here and that Pacific Arts Movement also inspires movement,” says Lorenzo.

The festival is the largest Pan-Asian festival of its kind on the west coast. Last year, attendance exceeded 20,000.

For more information on the festival or Pac-Arts visit www.sdaff.org/pacific-arts-movement.