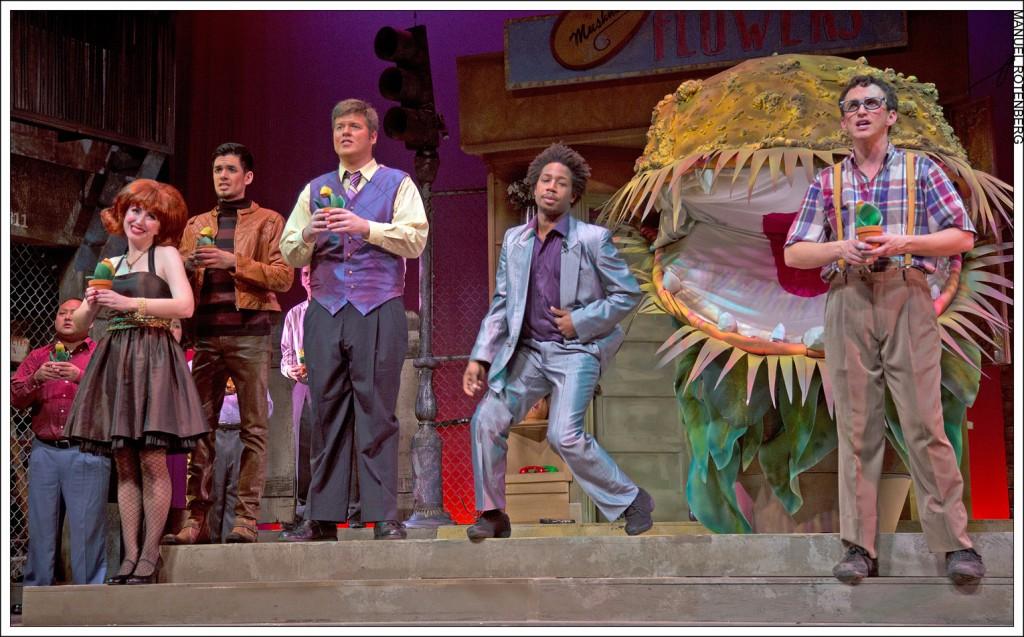 City College’s ”Little
Shop of Horrors” proved to be a success as students presented this comedic
musical, which opened on Oct. 26 at the Saville Theatre. It made audience
members laugh, gasp, and have fun as they watched the 1960s on stage.

“Little Shop of Horrors”
is a cult-classic comedy about bumbling florist Seymour Krelborn (played by
Oliver Wilcox) who works at Mushnik’s flower shop, a struggling business in the run-down part of town. While in love with one of his
co-workers Audrey (played by Loraine Odierno), Seymour finds a mysterious plant that he names Audrey II. He instantly gains fame and notoriety from the public for the strange creature, but as Seymour learns more about the plant, he soon realizes it has a taste for blood — human
blood. The comedy takes a dark turn as Seymour tries to hold on to his fame and
desires, which means feeding his man-eating plant by any means necessary.

The beginning of the musical was slow, with the opening prologue looking awkward as the ensemble stood there when the curtains opened, it seemed people were still adjusting to the spotlight. But after that, the musical really picked up, with the Crystalettes singing on key during the second number, “Downtown/ Skid Row.”

The core cast played their parts well,
especially the clumsy and awkward Seymour and his contrasting character, Orin
Scrivello, the sadistic dentist (played by Diego Valdez). Playing off of each
other, they had a chemistry that was evident on stage, especially when a joke
was made or there was a twist of dark humor.

Musically speaking, the singing from all the cast members
were clean and crisp, each having its own flavor, whether it was the cool sharpness
of Valdez, the shyness of Wilcox’s voice, or the over-the-top salesman voice of
Darik Houseknecht, who played Mr. Mushnik.
The only voice that seemed a little out of touch was that of Audrey, but only
because of the lisp the character had throughout the musical, which seemed to
affect her singing voice in her solo, “Somewhere That’s Green.”

The highlight of the show, though, was Audrey II, the man-eating
plant that grew bigger throughout the show. The plant was voiced by Tandy Ward
and operated by Francisco Brambils. The enormous, warped Venus fly trap of Audrey II seemed to steal
the show with its appetite and twisted humor, especially with the song “Git It,”
when it begs Seymour for more food.

The show also had something different from the original,
which was a dancer that contributed to some of the musical numbers, such as “Git it”
and the prologue. Although it felt a little out of place and drove the attention
from the other action on stage, it was a dose of originality that set it apart
from the original 1960s film.

Overall, the musical was great for a school production,
appreciating the original with its 1960s melodramatic acting and comedic attitude, while
still adding a little bit of originality to the performance.