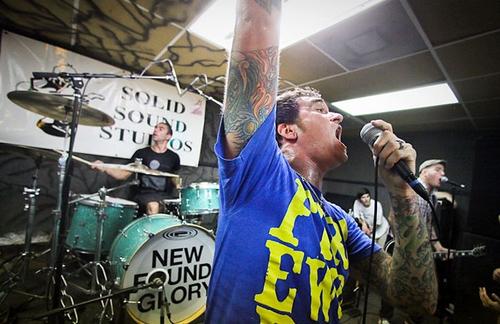 Pop punk is a genre that is guaranteed to ruffle some feathers. Some consider it a poser genre that gives “real” punk music a bad name and others see it as the essence and attitude of classic punk rock wrapped up in a nice radio-friendly package. Instead of fighting over it let’s just all sit back and enjoy the music. Here are some of my favorites:

These guys are pop punk royalty; to have any pop punk playlist without them would be committing musical blasphemy. The challenge with this one was picking a song out of their massive library for this list. “Radiosurgery” is off of their latest album of the same name and has all the elements of an old school NFG song while also giving a nod to their hardcore roots. All in all, this is a near perfect pop punk song. “Radiosurgery” is going on two years old but the Orlando five-piece just released a new song and is planning on heading into the studio next year to record an album. In the mean time, you can check out all of their songs on iTunes.

Bayside is really considered a pop punk band but its cover of Elvis Costello and the Attractions’ classic song is a perfect example of a pop punk cover done right. In fact, the band’s latest album, “Killing Time,” walks a fine line between both pop punk and the straight up aggressive alternative that it’s known for. Anthony Raneri’s killer vocals combined with the bands slightly up-tempo take on the song take this cover to the next level. In fact, the EP that this song is on is full of cover songs that Bayside has taken to the next level. You can get all of Bayside’s music on iTunes.

Pop punk bands seem to be popping up everywhere these days and most of them pretty much suck. Knuckle Puck, on the other hand, has proven to be one of the most talented bands of any genre that I’ve listened to in a while. “Stateside” is just one of the songs off of their stellar new EP “The Weight That You Buried.” The Chicago four-piece takes pop punk to the next level with their emotionally charged lyrics and aggressive in-your-face melodies. If you’re a fan of bands like The Story So Far then Knuckle Puck will have a place in your iTunes library. You can get all of their music on the band’s Bandcamp page: KnucklePuck.Bandcamp.com.

4. All Time Low – “Somewhere in Neverland”

All Time Low is one of the more popular and “mainstream” pop punk bands out today. Everyone listens to them, which could be a good thing or a bad thing, depending on how you look at it. “Somewhere in Neverland” is off of the band’s latest release “Don’t Panic” and addresses themes that everyone can relate to: growing up and taking responsibility; all while under the guise of a classic ALT love song. Plus, the fact that the song refers to one of the most beloved Disney movies isn’t bad either. You can get this song, along with the entire album on iTunes.

This song is one of the more mellow tracks on this list but don’t let that make you think that Man Overboard is a laid-back sounding band. In fact, if I had to compare them to anything it would be a mixture of old school blink-182, circa the late 1990s/early 2000s and New Found Glory a la “Not Without a Fight.” “Where I Left You” is one of the best songs on the band’s latest album “Heart Attack.” The semi-heavy pop punk sound and really catchy lyrics make for enjoyable listening experience. You can get their music on iTunes and catch them out on tour, with a stop in San Diego on Nov. 15 at the House of Blues.