‘How do you define American?’ 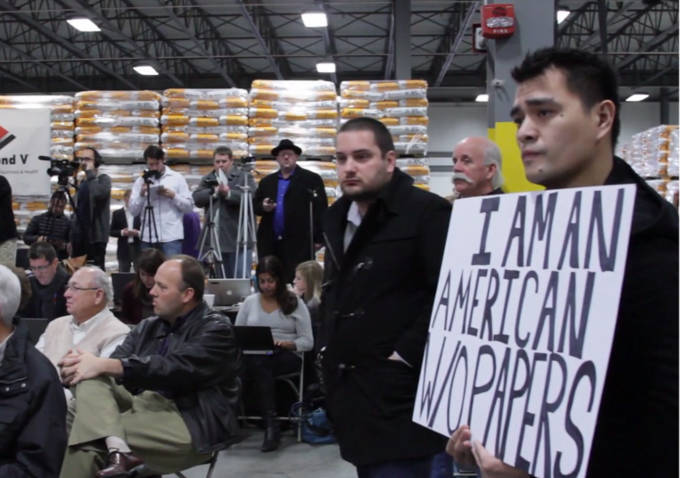 The film tells Vargas’ journey from being brought to America from the Philippines at age 12, finding out he didn’t have the proper documentation during a DMV visit at age 16 and his struggle to reconnect with his mother who he hasn’t seen in 20 years.

The film also documents the moment that he decided to reveal is status as an undocumented American in June 2011 in an essay for the New York Times Sunday Magazine.

“I’m done running.” Vargas wrote. “I’m exhausted. I don’t want that life anymore. So I’ve decided to come forward, own up to what I’ve done, and tell my story to the best of my recollection.”

Vargas’ reconnection with his mother is also a poignant point throughout the film. He tells stories about his life with his mother before he came to the states and shares how he felt when he realized that their lives were vastly different from each other.

“I remember calling mama and saying I won the spelling bee and mama didn’t really know what that was. I think at that point I kind of realized we were living in two different worlds.” Vargas said in the trailer for the film. “So when I found out that I didn’t have the right papers, that I was actually here in America illegally, I had to create a different system of reality in which she was never a factor. I mean we haven’t seen each other in almost 20 years.”

Bsides the gripping and emotional reconnection with his family in the Philippines, one of the major issues that the film discusses is immigration stereotypes In the beginning of the film Vargas talks to students at his old high school and asks them what they think of when think of an immigrant. The immediate response was a Latino labor or field worker.

“People think that this [immigration] is a Latino and brown issue and we need to broaden that.” Said Vargas at a Q&A for the film. “We need to preach beyond the choir.”

“Documented” succeeds in giving a new face for the immigration reform fight. It’s no longer just the Latino field and labor worker stereotypes that have been embedded into the mind of Americans. No, it’s much bigger then that. It’s students, doctors, lawyers, service workers, journalists, entrepreneurs and many more from places all across the globe.

This documentary is the perfect example of how film can transcend politics, breakdown stereotypes and tell the stories of real people. “Documented” is going to make you laugh and cry at times. It’s also guaranteed to make you think. As the curtains close and the credits roll the film begs the question: how do you define American?