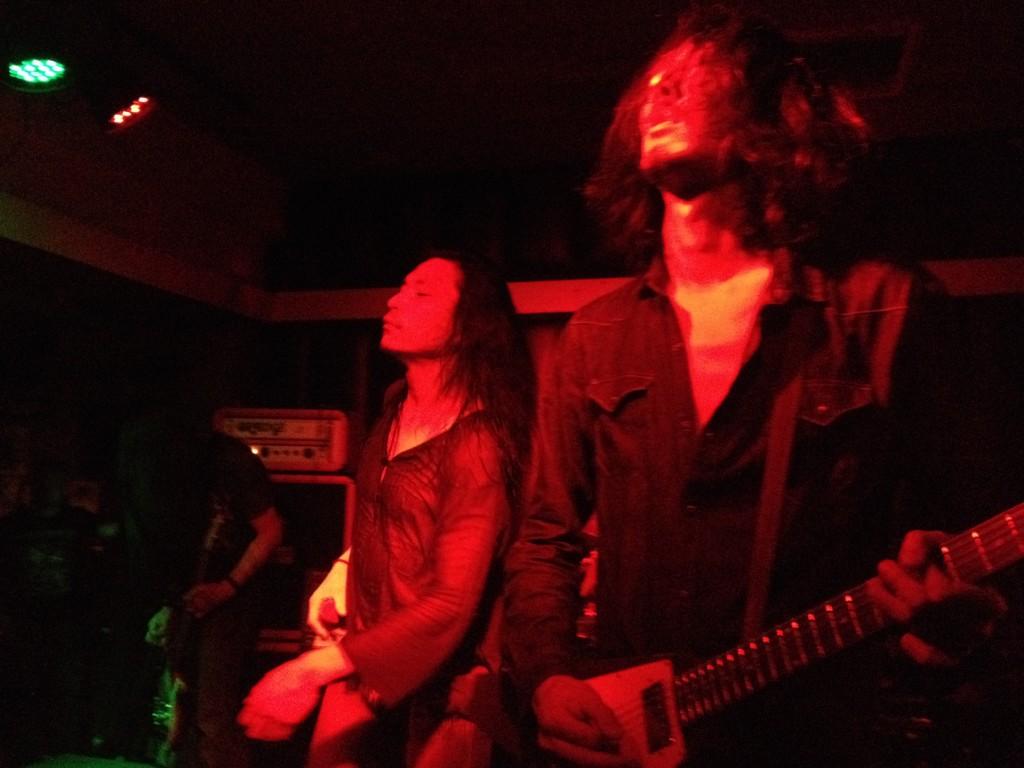 Japanese doom-metal band Church of Misery made a stop at the San
Diego music venue on their second American tour promoting their latest and fifth
album “Thy Kingdom Scum.”

The Nov. 24 show was kicked off by local psychedelic band Deep Sea Thunder Beast and Los Angeles based sludge-metal band Wizard Rifle who charged the atmosphere with adrenaline.

Once the anticipated headliners took the stage, the dive-bar like atmosphere morphed into a gritty Woodstock as the dynamic vocalist and synthesizer, Hideki Fukasawa danced and melodiously growled like a hellish flower child to the rough and adventure inducing riffs of lead guitarist Ikuma Kawabe.

Fukasawa took the crowd into a dark and psychedelic journey when he played the synthesizer to the rhythm of his bandmates, adding an acid show element to the performance with the help of the red lighting that consumed the small stage.

With each song they performed, it created a chilling remembrance to prolific serial killers; a recurring theme in their music. Most of their album covers include the mugshots of infamous serial killers that range from Ted Bundy to Charles Manson and most recently Peter Kurten, a psychopath that terrorized Germany in 1929.

“In the beginning of Church [of Misery], I had been reading & watching about serial killers,” said bassist and founder Tatsu Mikami, who responded via email to ease the language barrier. “It’s really interesting, the process of going from normal guys to psychotic killers.”

Most of their tracks have their own creative title followed by the name of the serial killer who served as a muse, such as “Spahn Ranch (Charles Manson)”and “Master of Brutality (John Wayne Gacy)” just to name a few.

Mikami formed Church of Misery in 1995 soon after his previous band “Salem” disbanded. He cites legendary metal band “Black Sabbath” as their main influence aside from several other 1970’s rock bands.

Throughout the years, the band has released approximately 11 Extended Plays and approximately six music compilation albums aside from the five recorded albums.

Mikami has been on a mission to reinvent their material with each album and said what made the new album different, is how each member had a chance to audibly show their musical abilities. He mentioned the nearly 13 minute track “Dusseldorf Monster” as an example, where a playful duet between drummer Junji Narita’s beats and Kawabe’s riffs can be heard throughout the track.

The band mixed things up by playing both brand new and old songs, intensifying the trippy and gritty atmosphere by starting with the climax building riffs of “El Padrino,” which translates to “The Godfather”; the familiar opening riffs of their brand new single “Brother Bishop” stirred the already adrenaline-soaked crowd.

Among the quartet’s playlist were “Born to Raise Hell”, “Taste the Pain”, “Blood Sucking Freak”, “Lambs to the Slaughter”, “Killfornia” and the rhythmic and catchy “Shotgun Boogie.”

Church of Misery performed two more encores throughout the night to soothe the demanding masses as they loudly chanted “Ine more song!” drowning the dim corners of the venue.

At the end, most band members mingled outside with fans, while others were treated to pictures and handshakes by Mikami at the merchandise booth having successfully converted another city.

For more information about Church of Misery or to look up additional tour dates visit www.churchofmisery.net.