Swedish songstress to enchant at The Casbah 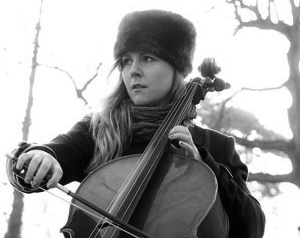 Linnea Olsson strums her cello in a park. (Photo courtesy of 405 tv)

After captivating the European continent, singer and cellist Linnea Olsson will grace North America for the first time along with the Sweden-based singer Ane Brun. They are to perform at the Casbah in San Diego on Feb. 21. Olsson is promoting her debut album “AH!” which was released on Jan. 21.

The cellist is no stranger to the music world, having been born to musician parents. She has played alongside legendary British singer Peter Gabriel, among others, and was the front woman of the Swedish indie-pop band Paintbox.

“Music has always been a part of my life and it still is, it’s always been very important to me,” said Olsson in a phone interview.

“It’s been pretty clear from really early actually that I wanted to do music,” added Olsson.

The singer said that she had a fleeting aspiration of becoming a veterinarian when she was a child, but she always knew she was destined to create music.

Olsson first began to play the cello at the age of 6. She grew up listening to iconic acts such as the Swedish group ABBA and Icelandic singer Bjork.

“I’ve been playing the cello all my life, it’s the instrument that I know the best and I love to sing,” reflected Olsson.

“In my early twenties, I started to really combine the two and make music with the cello that wasn’t really classical. I just decided to find my own voice.”

She described her musical odyssey that led her to play in different bands and genres.

The humble musician chuckled as she shared her future artistic goals and her desire to create music “and hopefully inspire other people as well with my music. I would love to compose for movies.”

Much like Bjork, Olsson’s unique melodies stem from a captivating combination of her soothing and wistful voice fused with her adventurous cellist style.

Though Olsson has managed to create a new sound to call her own, she still experiences moments of stage fright.

She occasionally compares herself to other artists and advises aspiring musicians to stay true to themselves and to be happy with what they can contribute.

The Olsson and Brun North American tour begins in Virginia on Feb. 11 and moves through the Midwest and Canada before hitting the West Coast.