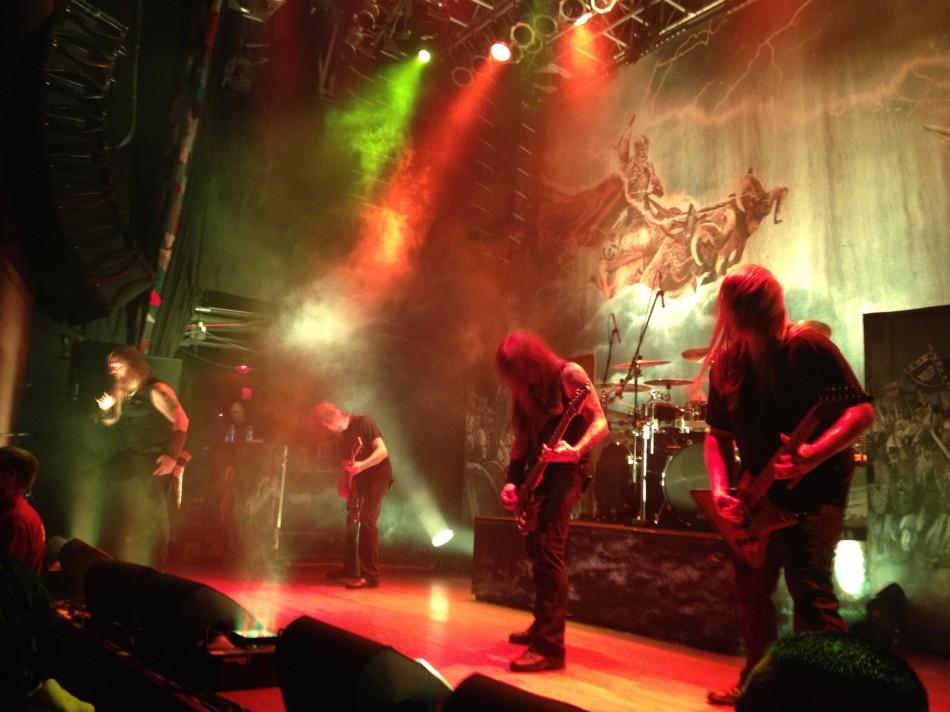 Swedish Viking metal band Amon Amarth along with the Ohio-based band Skeletonwitch dominated the House of Blues on Feb 16. The line of eager fans coiled around the venue as they waited to be let in to the sold out show, while other fans asked for extra tickets.

Members of Skeletonwitch warmed up the sea of fans with a 12 song set. They starting out with a climactically building acoustic introduction, with dark blue lighting and a fog machine, until vocalist Chance Garnette released his growl along with the riffs of lead guitarists Nate Garnette and Scott Hedrick for the song “This Horrifying Force.”

Skeletonwitch performed six songs from its fifth and latest album, including the title track “Serpents Unleashed” and ”Beneath Dead Leaves,” as well as songs from previous albums, such as “Permafrost” and “Crushed Beyond Dust.”

Once the crowd had recovered from the excitement of the opening band and were soothed by songs from Iron Maiden and Judas Priest, the audience charged the warm air with chants invoking the highly anticipated headliners.

The familiar blue lighting was trained on the epic artwork that is the album cover of the ninth and latest album, “Deceiver of The Gods.” A piece depicting a final showdown between Thor and Loki as he casts a lightning bolt with his hammer while descending from the sky on a massive ram onto Loki who is deflecting the lightning bolt with his enormous shield.

Once members of the band trickled onto the stage amidst the dissipating fog and growing excitement of the fans, the familiar face and trademark beard of vocalist Johan Hegg came into sight as he threw his fist up in the air declaring a silent victory. The band kicked off their performance with their latest single “Father of the Wolf.” A song which made news on several heavy metal sites when the quintet premiered the highly anticipated music video in Las Vegas, the first stop of their American tour.

Hegg and company played a total of 17 songs, encompassing a clever combination of old and recent songs. The set began with two songs off the new album, the title track, “Deceiver of The Gods” and “As Loke Falls.” Some of the older songs played were favorites like “Cry of the Black Birds” and “Guardians of Asgaard.”

Hegg had brought his Ron Burgundy mug on to the stage as he took sips in between songs, and asked the citizens of “San Diago” if they were ready to party on a Sunday.

As members left the stage to gear up for the encore, they left an electrifying atmosphere behind in a quite literal way as a florescent blue lighting consumed the epic background. Accompanied by clever sound effects that created a thunder story, the crowd was left both charged and wowed for one last round. Then the towering front man came out with Thor’s hammer and pounded the ground causing fog to spew out from the floor, kicking off the encore.

Once the melodic pillaging had reached its epic conclusion, Hegg thanked the roaring crowd and declared everyone an “official Viking.” He said he hoped that we would all meet again, but most importantly he reminded the crowd to “Stay classy.”