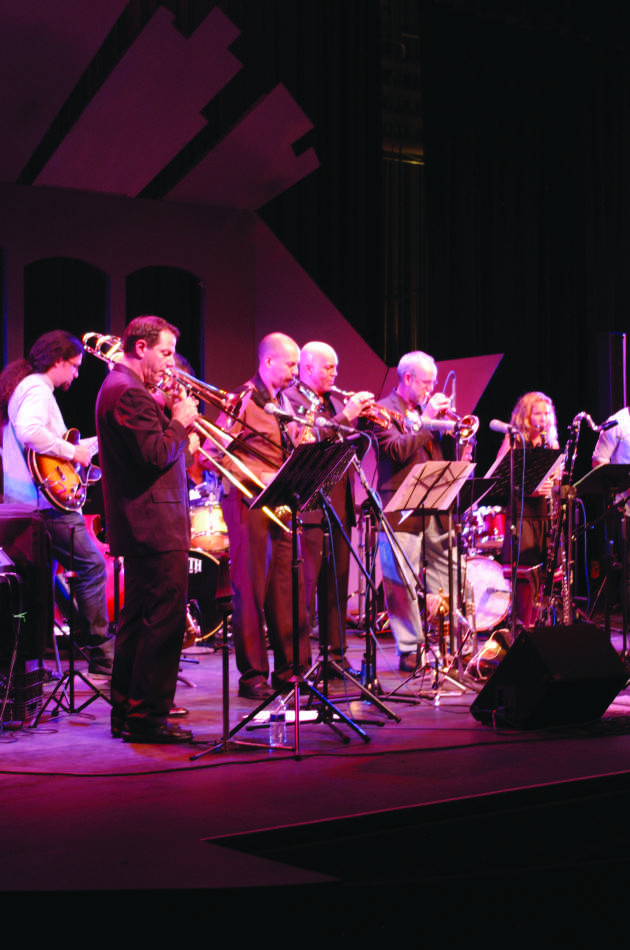 Local radio station KSDS Jazz 88.3 FM aired live music from Joe Garrison and Night People in front of an audience on Tuesday, March 11 at the Saville Theatre for the “Jazz Live” concert series.

The 15-piece band, Night People, led by producer and composer Joe Garrison, packed the theater but played for an even larger audience via the City College radio station Jazz 88.3 FM and also for the listeners that stream live on the radio show’s website Jazz88.org.

Above the band shined a large “On Air” sign as recording began and Vince Outlaw, the Jazz Live and Jazz 88.3 FM host, would signal when it was time to applaud, but it was evident when that time came.

Before the concert went live on air, Garrison and Night People played a five-minute improvisational piece to accompany the energetic atmosphere felt throughout the theater.

Outlaw then gave a brief introduction and passed the microphone to Garrison, who began, “Music to me is like energy…” a phrase he couldn’t finish. Instead, he threw his hands in the air and decided to show the audience.

The band opened with a piece called “Le Nouveau” followed by several 10-15 minute pieces, which included solos from almost each musician in the group.

Every month the Saville Theatre, with help from Jazz 88.3 FM, holds a concert and radio show for their listeners with performances by some of the world’s greatest jazz musicians, such as Garrison.

Tickets are typically $10 and $5 with valid student I.D. If you are a member or choose to become one, you have the option to reserve two free tickets if called and scheduled in advance.

Jazz 88.3 has concert events happening almost every day of the week at other locations as well. The next Jazz 88.3 event will be April 15, with pianist Lisa Hilton at 8 p.m. in the Saville Theatre.

For more information on how to become a member, or to see an events calendar, visit jazz88.org.