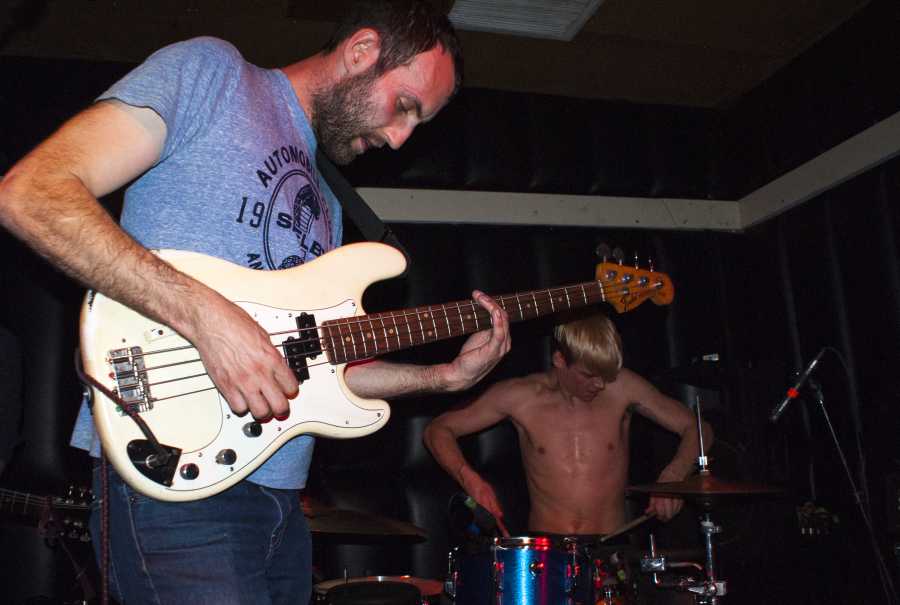 “What is the difference between love and hate?” Matt Flegel of Viet Cong
shouts towards the end of their song “March of Progress” off their new self-
titled album, which paints an allusion of abstract intellectual conflict.

Prior to Soda Bar’s doors opening for the night’s Viet Cong gig, the local
venue had already posted multiple signs on their front door and windows to
let patrons know the show was sold out.

The art-rockers from Calgary, Alberta, have been gaining momentum in just the past year or two thanks in part to the success of their “Cassette” EP and their connection to former Canadian indie-pop legend Women, a band that bassist/singer Flegel and drummer Mike Wallace were originally in years ago.

Although the ex-Women veterans were not available for an interview at
Soda Bar, when asked in a previous interview with online music magazine
Pitchfork how they felt about being associated with the former act, Flegel
stated that he is “okay with that, as long as people aren’t expecting us to
sound like them.”

Freak Heat Waves was the only opener to perform that night, another Canadian art-rock group from Victoria, British Columbia.

While most of Viet Cong’s “Cassette” EP had a more extroverted and slightly less intriguing garage-surf-pop tone, their recent LP is abrasively more introverted, darker and industrial. Otherwise, both records unveil nods to psych-pop with clean guitar chimes and stacked harmonies oddly blended within contrasting realms of post-punk and alternative rock.

Another thing that these albums have in common is that they’re lyrically more
thought-provoking and make more philosophical rhymes rather than
sing about love and small talk.

As described by Pitchfork album reviewer Ian Cohen: “Viet Cong pits
the romanticism of a newly enrolled philosophy major against the cynicism
of the dropout who still hangs around the library to tell the fresh-faced
youngsters it’s all bulls***.”

Viet Cong started off their Soda Bar set with the first three — and probably
most catchiest surf-pop-influenced — songs from their EP, which were
“Throw It Away,” “Unconscious Melody” and “Oxygen Feed,” while
almost the rest of their set consisted of songs from the new debut album.

As a live act, they play songs true to the perfection of the recordings if not
better than, while their presence is gimmick-free and straight to the point.

The set was then dramatically concluded with their 11-minute-long, heavy
and soul choking nothing-lasts-forever rock anthem “Death,” the final track
on their self-titled debut.

With a bipolar song structure almost similar to the soundtrack of a gradually
approaching hurricane, the song builds from a calmly sad emotion into a
loud, faster and shrieking explosion of angst and despair with bellowing
yelps and crisp chords reaching out through distorted sonic chaos.

Viet Cong are a breath of fresh air for the indie rock realm and a
sign of revival for admirers of post-punk.

Both their self-titled debut and the “Cassette” EP Reissue are available oniTunes and Amazon. For tour dates, visit their record label Jagjaguwar’s website www.jagjaguwar.com.