Students stand up in VAMP show 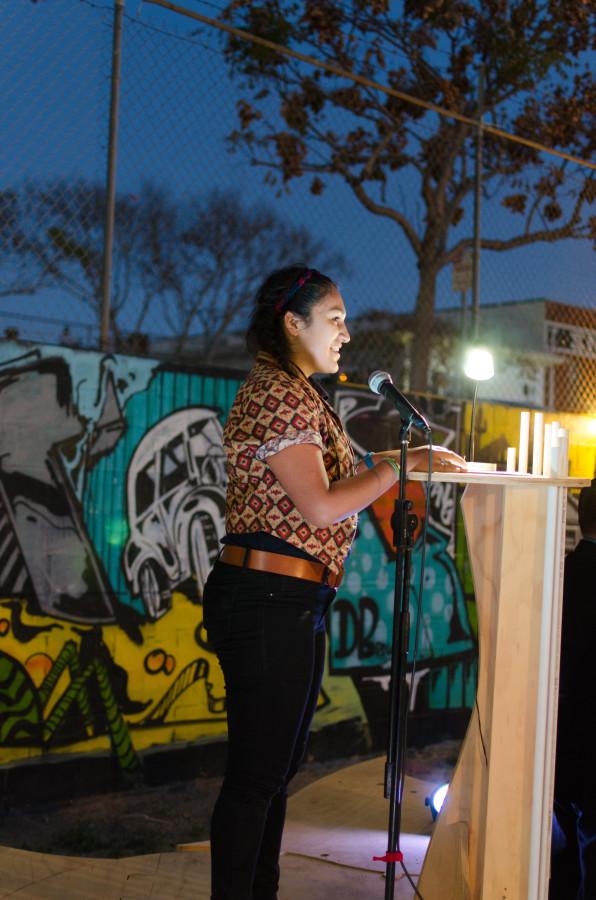 Student Jesimarie Rodriguez recites a written monologue at VAMP on March 26 along with eight other students. Photo credit: Richard Lomibao

Surrounded by street art painted by local artists, nine City College students told powerful stories that changed each of their lives at the SILO in Makers Quarter on March 26.

Titled VAMP (Visual/Audio Monologue Performance), each student described something they stood up to.

For a year and a half now, City College has collaborated with nonprofit organization So Say We All for VAMP shows, according to creative writing teacher Nadia Mandilawi. Each semester a different topic is chosen to write about and students submit stories that impacted or changed their lives. Countless submissions are received and only a few are selected.

This semester’s topic was “taking a stand” and was connected to the Social Justice Conference that happened that week on campus.

“We wanted to tie it to the Social Justice Conference and we wanted to get people to really think about times in their life that mattered to them, and times when they were proud of or times when they could have done things differently or the course of their life was changed,” Mandilawi said. “… It’s very hard because we have many, many submissions and all of them can probably be a very strong VAMP. I mean everyone has a story so I wish we could take everyone.”

Student Heather Oligny opened the show with her story about an abusive relationship she was in during high school. She talked about her bold decision to join the Navy and how she was able to escape her abusive boyfriend and go on to live her life without fear and secret.

Jesimarie Rodriguez was the third student to share her story, which was about a group of four homeless brothers, ranging in age from 10 to 15, who she often encountered at her job working at Edible Arrangements when they came in for free samples.

“I felt like Willy Wonka and the Chocolate Factory, and this made them my Oompa Loompas,” Rodriguez said.

Rodriguez became close to the boys and saw a part of her in them. She related her experience in middle school and the way she had identified with her own older brother, Freddy. When Rodriguez was young, she looked up to Freddy, who often elaborated on going to “O-Room” or detention. When she finally experienced what detention was like, it wasn’t how she had pictured it and described it as a pointless room to put bad students in who don’t learn.

She thought when sitting there, “How am I supposed to be a better person not learning anything? … Whoever made up O-Room just knew that all of these kids would eventually get kicked out of high school and get sent to continuation school …”

Sergio Osuna moved to the United States in search of a better life but upon moving, Osuna realized it wasn’t easy living in a foreign country and learning a new language and adapting to a new culture.

One day at work, an acquaintance named Cesar visited him and told him he had no where to stay, he’d been kicked out of his home and wanted to stay with Osuna. Osuna was initially reluctant to let him stay but allowed it when Cesar began to cry.

After a long day of working a 12-hour shift, Osuna noticed a change in Cesar’s behavior but paid little attention to him because of tiredness.

Osuna explained Cesar came behind him and choked him with a belt and began to stab him with a pair of scissors. Osuna was taken to a hospital and remained in a coma for some time and believed he wouldn’t survive. He was lucky enough to survive and explained he now lives in fear, constantly checking his surroundings and doesn’t trust many people.

He ended his story with, “Cesar tried to cut my life forever, but I’m still fighting to survive.”

For more information on VAMP, their upcoming events and submission guidelines visit www.sosayweall.com.