An innovative collaboration between cosmetology, theatre and photography at San Diego City College 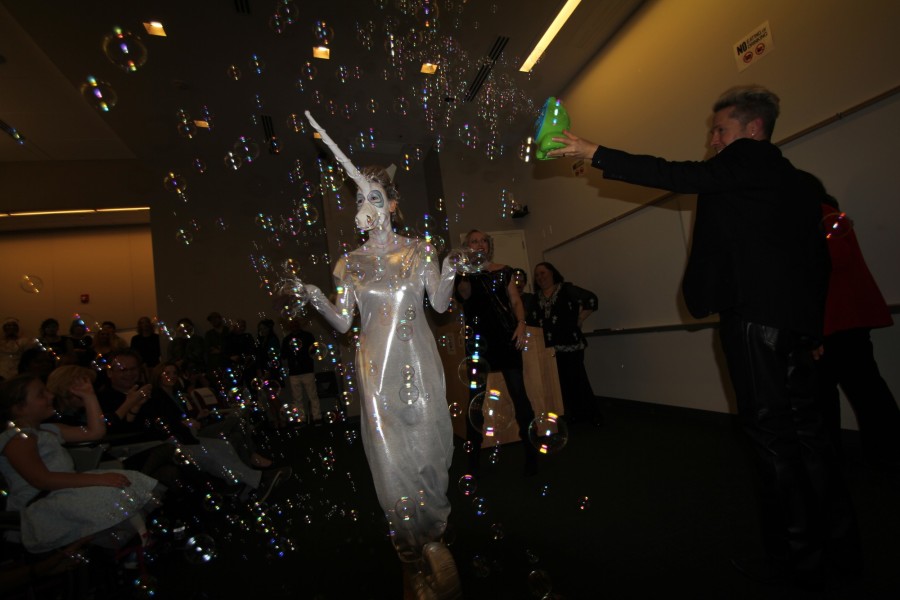 The bass from the electronica and ambient style music grumbled outside of the V-101 Auditorium on Dec. 8. Intertwining the rhythm via matching their beats-per-minute, was an art in itself, but the music wasn’t the spotlight tonight.

The collaborative fusion between the cosmetology, theatre and photography departments was the showcase.

“This is what we call a ‘theory to practice,’” mentioned Leroy Brady, a professor of business at City College, who also doubled as the DJ this night. “In the classroom we think about these things, but very seldom do the students have the opportunity to display what they have been taught.”

It was 8 p.m. The models and their artists were trickling through the full capacity room, walking down the right-side ramp where Brady was posted up with his equipment.

“That’s magnificent,” exclaimed Brady as he caught early glimpses of the fantasy characters before strutting their stuff in front of the crowd.

Professor Sudabeh Phillips, the department chair of Cosmetology, broke down the components and inspiration behind each concoction.

The preliminaries that lead to this climactic display, started two hours prior, with a makeup, hair and costume application located at the V1 Senior Lab, and then a photo shoot on the 5th floor atop.

“I honestly loved the Frozen SeaHorsicorn Unicorn (Bluebell Silver Eyes), because it was very fanciful, fun, and it took a lot of work to get the prosthetics on,” commented Marcia Sorini, a Cosmetology student at City College.

Sorini was referring to the metallic-silver clad model, Stephanie Wirkus, decked with a matching horn, snout and hooves, lead by her makeup and hair artist, Liz Sowles. The two students followed a gentleman holding what appeared to be a ray-gun, which was later activated as a bubble machine, to complete the look with its soft and iridescent, projectiles. Some of the crowd up front, including professor Constance Calhoun and Chancellor Constance M. Carroll, applauded when over-sprayed with the mist.

Professor David King was also in the front row. Just an hour earlier, he lead the photography session by prepping the grid-lights and remote triggers for his students.

“All of the students in my class are cosmetology students learning to take portfolio-ready shots of their handiwork,” King said. “This type of collaboration allows students to shoot a broader collection of makeup styles and looks with the added pressure of real-world time constraints.”

Nicole Rice, also known as “Anastasia Snow,” was dressed in a white, body-fitting gown. Her icey snow queen look, which she put together herself, was inspired by her daughter’s favorite movie, “Frozen.” She designed and handcrafted her own crown and added crystals to her face with spirit gum adhesive.

“This will put me in a better position so I can start my own business, work my own hours and charge my own rates,” Rice said as she motioned to her daughter to keep still. Rice is currently enrolled in the cosmetology and theatre makeup courses at City College.

“The idea to give the cosmetology student a chance to learn these important, but ancillary skills, came from Sudabeh Phillips in cosmetology, and then was supported and made ‘real’ by the deans, Rose LaMuraglia and Trudy Gerald,” King said. “That support allowed us to quickly develop the concepts into curricula and get underway with this first set of classes.”

Initially during the presentation, the freshman of the Cosmetology department, walked out and showed their looks via mannequin heads propped on a stick. Then, over 35 models and their artists, from “Christmas Heartprint” to “Wonderland de Los Muertos,” received their certificates from LaMuraglia, dean of business, technology and cosmetology and Gerald, dean of arts and humanities.

Professor Andrea Singer from the stage makeup class, also played a big part in the transformation of this fantasy program, and making it a reality.

“The students are now able to get their associates in arts degree in cosmetology and not only are they leaving with a license, they are leaving with a degree,” Sorini said as she hugged her classmates.