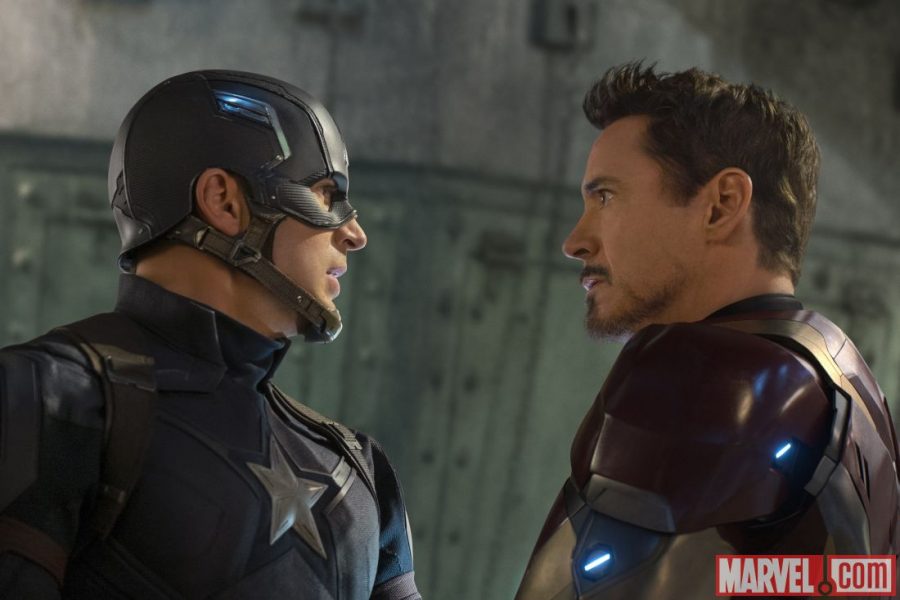 Captain America and Iron Man square off defending their beliefs. The movie is a clash of titans fighting for either freedom or security. Courtesy photo from marvel.com

Going back to our country’s history, it is known that the Civil War was between the North and the South over slavery. The movie, “Captain American: Civil War” is a updated superhero twist on the concept Civil War.

The movie came out last weekend. Being a newbie to the Marvel world, I still thoroughly enjoyed watching the movie and seeing the humorous dynamic between Iron Man and Captain America. The fighting scenes were exciting to watch and the graphics were legit.

The movie starts with a flashback involving “Bucky,”,also known as the Winter Soldier, being brain-washed into a killing machine by the Russians.

Following the flashback, the Avengers are seen in action during the present day on a routine mission in Lagos.

Assembled in Lagos are Captain America, Black Widow, Scarlet Witch and the Falcon. Their battle is exciting as they attempt to stop the bad guys from stealing a biological weapon. Unfortunately, the battle has some unforeseen consequences as the Avengers leave a trail of fatalities.

The U.S. Secretary of State, Thaddeus Ross, who is played by William Hurt, is upset over the destruction and death, encourages the Avengers to agree to the Sokovia Accords, which essentially places them under the control of the United Nations. Iron Man agrees with this punishment because he feels guilty for all the innocent deaths. Captain America believes it will limit their ability to act as needed. Of course, this disagreement leads the Avengers to the “Civil War” in the title.

On one side there is Captain America, played by Chris Evans, Falcon, played by Anthony Mackie and Scarlet Witch, played by Elizabeth Olsen. They don’t agree with signing the Sokovia Accords because they will no longer be free agents to spring into action as they please to save the world on their terms.

On the other side there is Iron Man, played by Robert Downey Jr., Black Widow, played by Scarlett Johansson, War Machine, played by Don Cheadle, and Vision, played by Paul Bettany. Although they may not agree with the Accords, they believe it is vital to do what they can to gain the people’s trust again.

Very similar to our country’s Civil War, there was the South, which wanted to keep slavery legal because it benefitted its residents. Then there was the North, whose residents didn’t think slavery was fair. The American Civil War was one of the most destructive conflicts and the Avengers’ Civil War was just as big, in the superhero context.

Behind the war is another reason for the battl: Captain America makes an effort to defend his old friend Bucky, who he believes was framed for bombing the U.N. meeting, killing King T’Chaka of Africa. The character Black Panther, who is the son of the king, is brought in as he seeks revenge for the death of his father.

I won’t give any more details to spoil the movie. You should definitely watch it to see what all the hype is about.