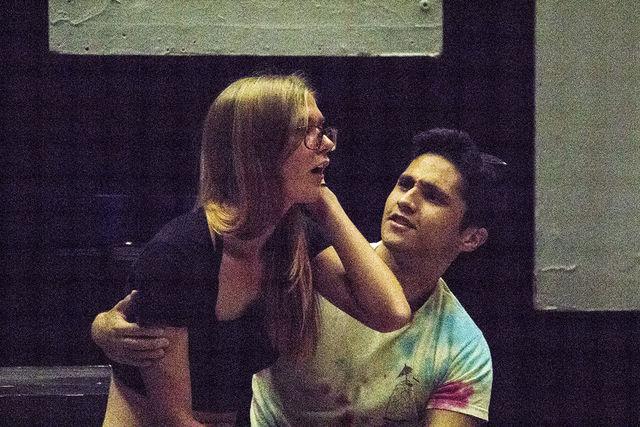 Beckah Church and Julian Martinez interpret Chloe and Ty from the play "Good Kids" during a rehearsal at The Box Theatre at City College on Sept. 22. The play is based on a rape in 2012 in Steubenville that received national attention. Photo credit: Celia Jimenez

Imagine going to a party with your friend to have a normal, fun night. The next thing you know, you are laying in a hospital bed without your underwear and you’re in excruciating pain. You were raped.

The first theater production of the fall at City College, Naomi Iizuka’s “Good Kids,” opening Sept. 30, should trigger many emotions for the audience.

The play deals with the aftermath of a real-life sexual assault that took place in Steubenville, Ohio, in 2012. The evidence that brought the perpetrators to justice was a bunch of pictures that were spread through social media. Many were accompanied by vile messages directed at the victim.

The trial exposed the behavior of some high-schoolers, who wasted no time spreading the crude photos of the victim unconscious and naked. Many people in the community felt these teens were cruel and inhumane to one of their peers.

Depicting characters that are seen as evil or unpleasant challenged the cast members, says their director, Katherine Rodda. They had to jump through many emotional hoops in a short period of time, given the limited rehearsals they had.

“Four of the nicest young men I have ever met are playing characters who participate in an incredibly unsavory and sickening event,” explains Rodda, the co-chair of the Visual and Performing Arts program, in her theater blog.

The play will be staged at the Black Box Theatre instead of the Saville Theatre. “Good Kids” is more suited to a smaller space and there will be a “talk-back” session after every performance between audience and cast members.

“We think our audiences are going to need to talk. The cast will need to talk,” says Rodda.

The conversation will be moderated by representatives from the City College mental health program.

City College student Ariss Fitch, who plays the character Diedra, says there is a good reason for students to see the play.

Earlier this year, a Standford student, Brock Turner, sexually assaulted a girl behind a dumpster and was only given a 6-month sentence, in a case that captured national attention. The judge said at the time he didn’t want to further damage Turner’s bright future. He served only 3 months and was released recently.

“That sort of injustice fries me,” says Rodda. “We have to give justice to that girl and all the girls and men that have endured a sexual assault and not come forward, and are blamed for it. If we can empower one person to speak up for themselves then we’ve done our job.”

The play premieres Friday, Sept. 30, and runs through Oct. 8. Performances on Fridays and Saturdays are at 8 p.m. and on Sundays at 2 p.m. The Black Box Theatre is next to the Saville Theatre on 15th and C streets.