‘Good Kids’ is worth watching 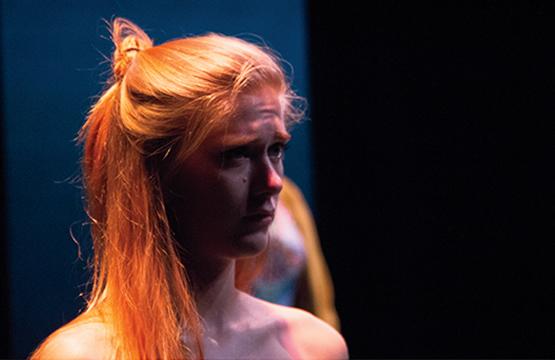 Bekah Church is one of the protagonists of the play "Good Kids" that dramatizes the aftermath of a real-life rape. Play will be stage at City through Oct. 9. Photo credit: Celia Jimenez

She was asking for it. She was a slut. Boys will be boys.

In today’s society, a culture of rape is being formed and Naomi Iizuka’s “Good Kids” takes on the difficult task of unmasking this horror masterfully.

Based on a true event from 2012, “Good Kids” focuses on a group of high school students in a small, Midwestern town. Chloe (Bekah Church), from a nearby school, wears a tight, short, sexy dress to crash a big party, and gets drunk before leaving – she’s barely able to walk – with a group of football players.

The next morning, Chloe wakes up, undressed, in a basement she doesn’t recognize. Remembering nothing, she gets a ride home. But because the football players themselves chronicled, via social media (videos, tweets, photos, etc.), the way they all raped Chloe while she was unconscious, the story doesn’t just end there.

The police get involved and several townspeople (and many students) voiced the opinion that Chloe had asked for it, and that the players with bright futures shouldn’t have their lives ruined by the assault.

Only one student, Skyler (Harmonie Rose), thinks to call the police, though the young men’s images and tweets were available to everyone online.

Why does it only occur only to one young woman that a crime’s been committed?

When the students are talking about what happened, Skyler repeatedly insists that no one’s calling what happened a “rape,” even though the circumstances couldn’t be much clearer.

Maybe because rape doesn’t seem like a crime that someone we know would commit, and we don’t want to believe our peers have the capacity for such a heinous act, there is a fear of talking about the subject. But getting past the fear of discussing the issues surrounding rape is one of Iizuka’s goals and the play as a whole achieves its mission very effectively, thanks in large part to director Katherine Rodda and her fine cast.

Choosing to perform the play in the Black Box Theatre was the correct decision as it is a smaller and more quaint stage than that of Saville Theatre. The play is directed to the three sides of the room, which puts the viewer right in the mix with the actors.

Go to see the show with friends. Tell your co-workers to check it out. Invite your family. It is truly worth watching. Everyone needs to hear this girl’s story because it will be a part of her for the rest of her life.

“Good Kids” will be performed on Oct. 7 to 9, at the Black Box Theatre at City College. Performances on Friday and Saturday begin at 8 p.m. and the final performance on Sunday begins at 2 p.m. Tickets are $15 regular price and $10 for students.