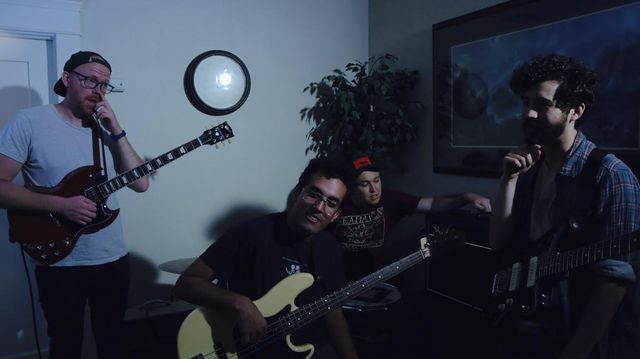 San Diego’s emo music scene flourished during the early nineties and is experiencing a reemergence with bands like Waves + Billows, which released their debut extended play “Perseverance.”

Full of youthful angst and emotion, the six-track EP is filled with energy from top to bottom, the band achieving a sound that updates the “emo sound” template with great success.

Propulsive drums kick off the album with opening track “Dads.” It’s a deceptively explosive track, with a fine balance of guitar interplay and quiet dynamics led by an inspired vocal performance from drummer and main vocalist, Jacob Dempsey.

The mid-tempo track “Veins” follows the same steps of the opening song, with its shimmering guitar and prominent driving bass line, build up toward the end of the song, when the band lets loose and shines.

No doubt, one of the highlights of the record is “Intention,” delivering a great use of dynamics, marching through with a plaintive guitar and vocal delivery, a mix of catchiness and abrasiveness. The track showcases the early songwriting prowess of the young group, and even though no other track on the record matches the highs of “Intention,” there’s plenty of promise here that guarantees that they will.

With the lid fully blown off, “Stay” and “Forged Family” create a musical explosion. The somewhat restrained energy of the previous tracks is forgotten, providing the band plenty of room to flex its muscle. Both tracks burst with sheer emotion and yearning.

Closing “Perseverance” is the song “Jaded,” which has an opening spoken word section that seems rather fitting. It gives the record a sense of closure with its uplifting final message though it’s delivered with a contradicting emotion, almost wallowing in the power of negative thinking, a clever juxtaposition.

With already a grasp on their musical persona in their well-defined sound, Waves + Billows turned in a mighty debut that sure stands out from the rest of their peers, showing glimpses of a band that soon enough might break free from the confines of the emo sound to become something else, whatever that might be. In the meantime, we have “Perseverance,” a valuable gem in the current revival of the San Diego emo sound.