War Leaves Veterans With More Than A Memory 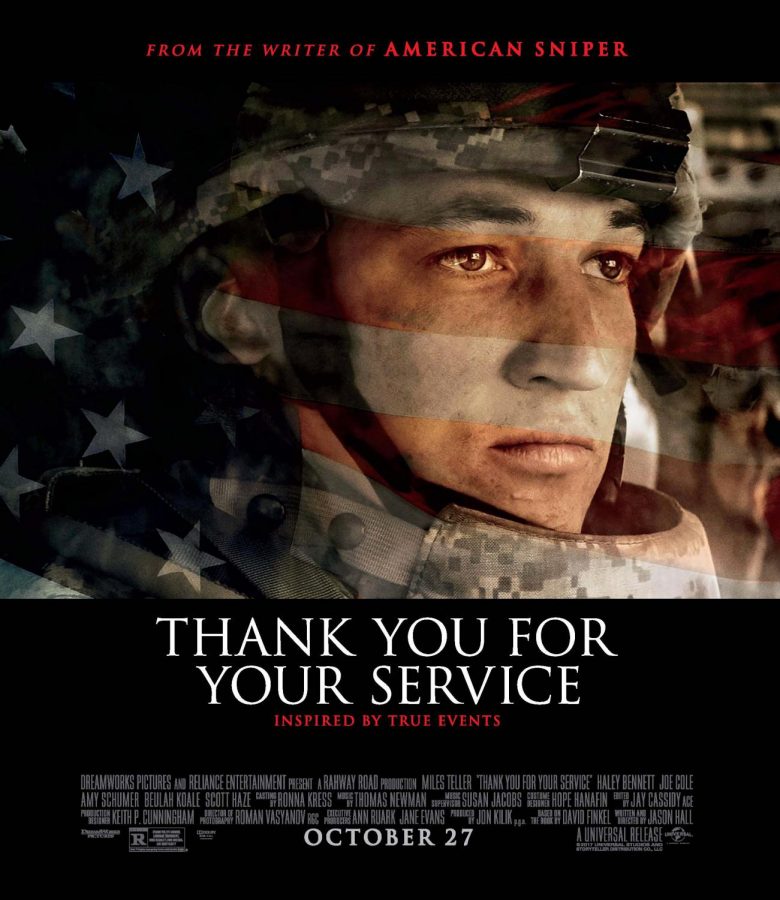 Thank You For Your Service

Post Traumatic Stress Disorder, or PTSD, is repeatedly in the news, especially in terms of war veterans. The movie “Thank You For Your Service”, written by Jason Hall in his directorial debut, is about several soldiers who are friends, and their families, adjusting to civilian life in Fort Riley, Kansas after returning from Iraq in 2007.

All three worked together as part of an Explosive Ordnance Disposal (EOD) unit, and experience PTSD related to their wartime duties, and the questions surrounding their roles in the combat-related injuries and deaths of fellow unit members.

Miles Teller (“Whiplash”, “The Fantastic Four”)  plays Sergeant Adam Schumann, a soldier who returns as a broken man, questioning his actions in Iraq during crisis operations. Beulah Koale (“Manurewa”, “One Thousand Ropes”), as fellow soldier Tausolo Aieti, believes the military saved his life and wants to return to Iraq despite life-threatening PTSD. Joe Cole (“Green Room”, “Secret in Their Eyes”)  plays another soldier from their squad, Will Waller, who returns home in crisis, only to deal with his family’s abandonment. All three must navigate a true-to-life tedious and worrisome maze trying to get medical attention from the overworked veteran’s hospital.

Richard Linklater (“Boyhood”, “Before Midnight”) directed the movie “Last Flag Flying”, a road-trip story of three Vietnam War veterans who unite after 30 years to bury one’s son, a Marine killed in Iraq in 2003. Steve Carell (“The Big Short”, “Foxcatcher”) plays the quiet, doggedly good-natured Richard “Doc” Shepard, whose son was killed. Bryan Cranston – Walter White from AMC’s hit “Breaking Bad” – is hard-partying bar owner Sal Nealon, and Laurence Fishburne is the Rev. Richard Mueller, a now-sober pastor who turned his life around and aims to keep it that way.

“Last Flag Flying” could easily become a comedy about old codger war buddies on a road trip, since several comical events take place on the trip from Virginia to New Hampshire. The story centers on an unexplained tragedy that ended their friendship three decades before, the changes in their lives after Vietnam, and the tragic and needless death of Doc’s son in Iraq. The return of his son’s body and the planning of his funeral are the sobering undercurrent to their continual antics in cars, trains and U-Haul trucks.

Although there is no reference to it, “Last Flag Flying “is a sequel to Hal Ashby’s “The Last Detail”, the 1973 comedy-drama about three Navy sailors on a tragic road trip. Each movie stands alone, but the characters are the same, separated by the 30 years between the two wars, which gives the backstory to the current films characters.

Both movies are definitely worth seeing, and bring home the reality that many veterans face on return from wartime service – difficulty fitting into civilian life, constant thoughts of colleagues who died or were injured, the endless questioning and reliving of mistakes made in the heat of combat, myriad health issues, and the seeming inability to share life-changing experiences with family members and friends.

Both films also show that over the three decades that separate the Vietnam and the post 9-11 Wars, the nation and its returning veterans are still left having to grapple with traumatic mistakes made during the heat of battle, and trying to make sense of the futility of war.

Based on David Finkel’s non-fiction book, “Thank You For Your Service” premieres this Friday, Oct. 27. “Last Flag Flying” opens on Nov. 3.