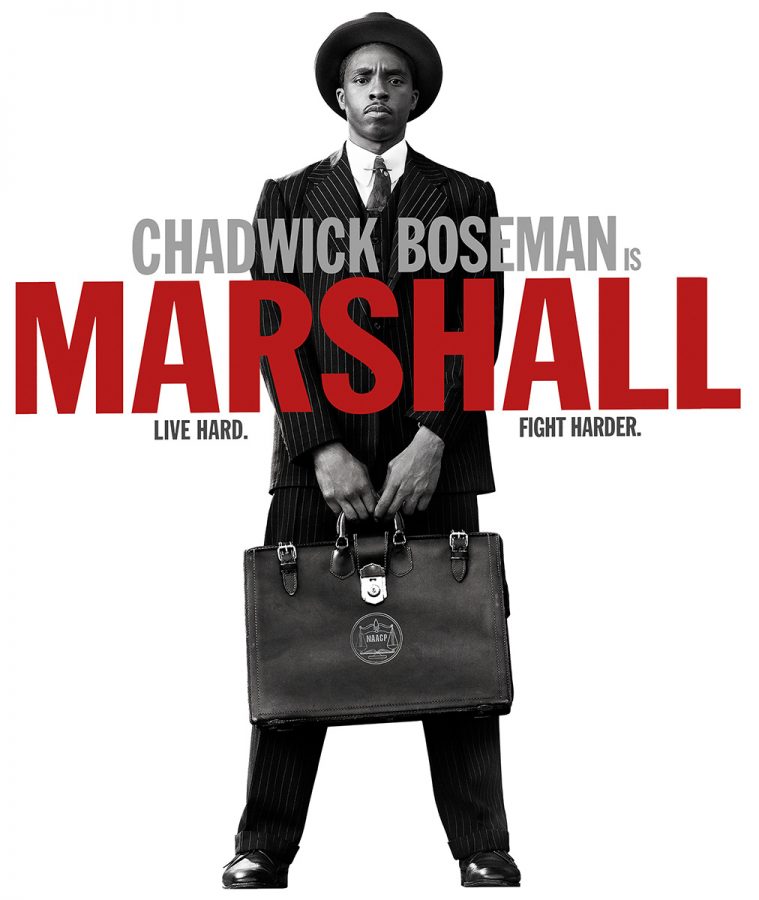 Civil rights and racial justice continue to be polarizing topics in our society, and are sadly just as relevant now as they were over 75 years ago during World War II America. Director Reginald Hudlin’s film “Marshall” is the true story of an early trial in 1941 by young lawyer Thurgood Marshall. He was the sole lawyer from the National Association for the Advancement of Colored People (NAACP), who later became America’s first black Supreme Court Justice.

The film follows him from NAACP headquarters in New York, to conservative Connecticut where he is sent to defend a black chauffeur accused of sexually assaulting and attempting to kill his white female socialite employer. Thurgood Marshall, played by Chadwick Boseman (“Gods of Egypt,” “Capt America: Civil War”), partners with courageous young Jewish lawyer Samuel Friedman, played by Josh Gad (“Frozen,” “Beauty and the Beast”), when the segregationist court refuses to allow him to defend the accused, and together they must find a way to help their client.

This high profile case and the racist and anti-semitic society of 1940s America is chillingly relevant in 2017, with our current racial tensions and climate of religious intolerance. Although the movie centers on the trial, it also shows that segregation, prejudice and racism was not confined to the southern part of the U.S. In addition, the sexually charged scenes between the socialite accuser, played by Kate Hudson (“Deepwater Horizon,” Something Borrowed,” “Bride Wars”), and her black chauffeur played by Sterling K. Brown(“Whisky Tango Foxtrot,” “The Suspect”) highlight the rarely shown and barely accepted reality of human relationships in America during historic times of racial segregation. “Marshall” is surprising in its depth of emotion and its unexpected turns of human frailty, weakness and rage.
“Marshall” also includes some smartly placed cameos from Jussie Smollett (Fox’s “Empire”) as American activist and writer Langston Hughes, and Rozonda “Chilli” Thomas from R&B group TLC, playing American author Zora Neale Hurston. The film ends with another shrewd twist – an interesting cameo as part of the closing scene.

Although the outcome of the case hangs in the balance throughout the film, Thurgood Marshall’s partnership with Samuel Friedman later led to the creation of the NAACP legal defense fund, and a career highlighting several ground-breaking cases that helped overturn segregation and led to the American civil rights movement of the 1960s.

Overall, the true-crime drama of “Marshall” keeps the viewer deeply engrossed as tension builds. We cannot help but wonder is the chauffeur really innocent, are too many members of the jury prejudiced for the trail to be fair, and what will happen to the two lawyers who have put their lives on the line to defend this case? The racism of 1940s America is baldly apparent, but Thurgood Marshall and Samuel Friedman doggedly continue to work throughout their own rage, standing up to power and corruption. This is both an entertaining and an important film for 2017 America.