Give Netflix a Chance 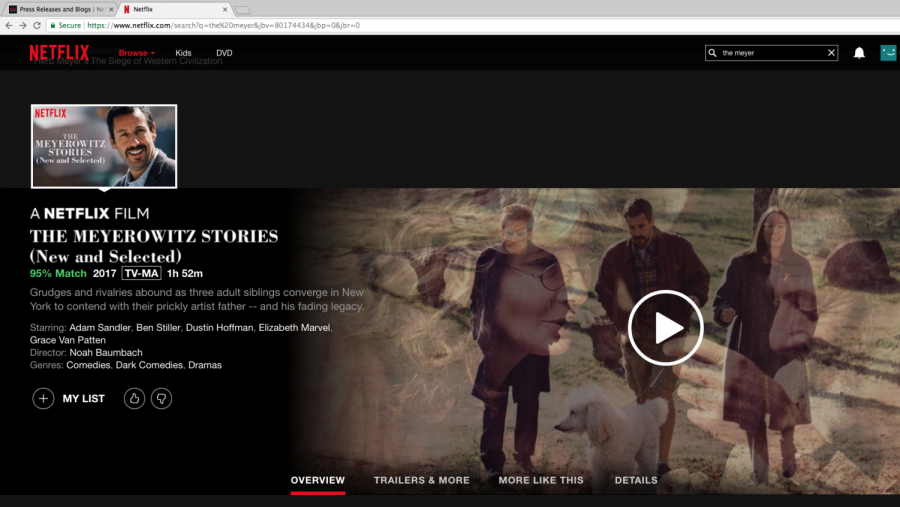 Oscar season is just underway and three movies that should definitely be in contention for the 90th Academy Awards are “The Meyerowitz Stories,” “Mudbound,” and “Our Souls at Night,” all of which can be watched on the TV/Film streaming service Netflix.

All three films have enjoyed their fair share of critical acclaim, with “Mudbound” currently rated at 95 percent on Rotten Tomatoes, “The Meyerowitz Stories” rated at 93 percent, and “Our Souls at Night” currently holding at 91 percent. This compares favorably with mainstream movies being released in theatres such as “Thor: Ragnarok” (94 percent) or “Last Flag Flying” (70 percent).

Although these films have enjoyed success with critics and Netflix users, it’s the Academy of Motion Picture Arts and Sciences that ultimately decide whether all that critical acclaim will pay off for the films or not. The Academy Award, or Oscar, is the most prestigious American film industry award. These three Netflix films definitely push the envelope of streaming service films and are viable options for receiving Oscar nominations.

This isn’t to say that streaming services don’t get nominations, in fact during the 89th Academy Awards, Amazon Studios and Netflix did receive nominations and even won four combined Oscars. Amazon Studios won three Oscars as distributors for the film “Manchester By the Sea,” while Netflix won as distributors for the short documentary film “The White Helmets.” Even though Netflix has in fact received a nomination and win, the streaming service still hasn’t received the attention from the Academy that it deserves.

In 2015, a Netflix original film known as “Beasts of No Nation” was released straight to Netflix and received enormous critical acclaim and currently holds a 91 percent rating on Rotten Tomatoes. The film, which starred Idris Elba (“Pacific Rim,” “Zootopia”), was praised for its story, pacing, cinematography, writing, and acting, with Elba’s performance being singled out as one of the best supporting performances by an actor that year.

However, the film didn’t receive a single nomination at the 88th Academy Awards. Not only that, Elba earned nominations for The Golden Globes and the Screen Actors Guild (SAG) Awards for this film. Elba went on to win the SAG Award for Outstanding Supporting Actor and is the first, and so far only, actor to win this award without being nominated for an Academy Award.

Hopefully, much like at the 89th Academy Awards when the Academy decided to nominate more people of color than ever before, they’ll consider more Netflix films for nominations. Other Netflix movies that have received critical success include “Okja” (86 percent on Rotten Tomatoes) and “1922” (88 percent). The high quality of these films is apparent, and the Academy needs to start noticing them more.