Foo Fighters, Nelly and Post Malone were among the top performers at KAABOO Del Mar on Sept. 14. 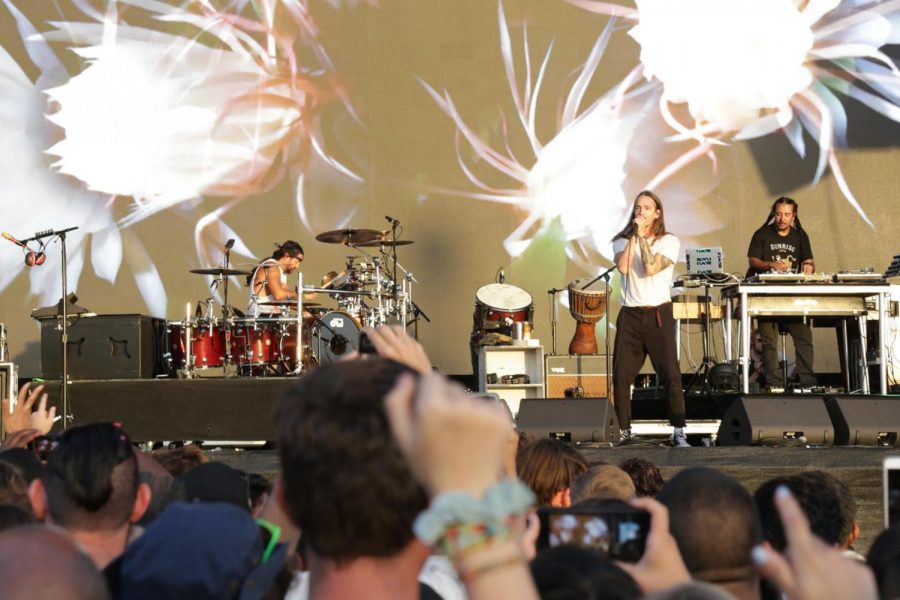 Incubus was one of 18 acts to play KAABOO Del Mar on Sept. 14. Photo by Tiffany Rihana.

The crowd was nearly as smoke filled as the stage when Post Malone came on wearing a RIP Mac Miller shirt.

Lauren Adams hoped that Post Malone wouldn’t let her down. Not only was she at KAABOO Del Mar to see Post Malone specifically, it was also her 23rd birthday and the first time she ever attended a music festival.

Lauren didn’t get her hair braided and glittered to be let down, but Post Malone wasn’t letting anyone down.

KAABOO kicked into high gear on Sept. 14 and the view of the MGM Resorts Grandview stage from the Verizon Up Members Lounge was one of the best at KAABOO. There was also free food inside provided by the Oceanaire and an assortment of free drinks.

Free drinks were why Ashley Joshi was in here. The 23-year-old was originally from San Jose but graduated from USD last year in Behavioral Neuroscience and Communication. Joshi had such a good time at the 2017 KAABOO festival that she bought her pass last fall before knowing who would be performing this year.

She said she was excited to see Katy Perry, Halsey, Imagine Dragons, Jimmy Eats World and everyone else. She was really happy to have seen Tom Petty and the Heartbreakers last year, since Petty died shortly after headlining KAABOO.

Incubus was the crowd favorite during the first night of the festival. Chris Catia of Carlsbad said the band was “the realest sh** here.”

Incubus had almost everyone singing along with them, “Whatever tomorrow brings I’ll be there with open arms and open eyes.”

Catia came to KAABOO to see Incubus, but he also wanted to see Foo Fighters, Nelly and Gucci Mane. He said that he attends a lot of shows and saw Incubus a number of times. His favorite was a show they did at the Hollywood Bowl.

Andrew Garza, 33, was also at KAABOO for Incubus and Foo Fighters.

Last time he saw them was the first concert he ever went to back when he was a high school freshman in Fresno. However, what Garza and basically everyone else at KAABOO were all looking forward to was Foo Fighters.

This will be Garza’s fifth time seeing Foo Fighters.

“Dave Grohl is the best musician of our generation,” he said. “He always puts on a good show.”

Samantha Hansen, 36, is a native of San Diego but she was here to see Nelly, who she’s been listening to since high school. Her favorite Nelly song was “Dilemma,” but she also likes “Hot in Herre” and “Batter Up.”