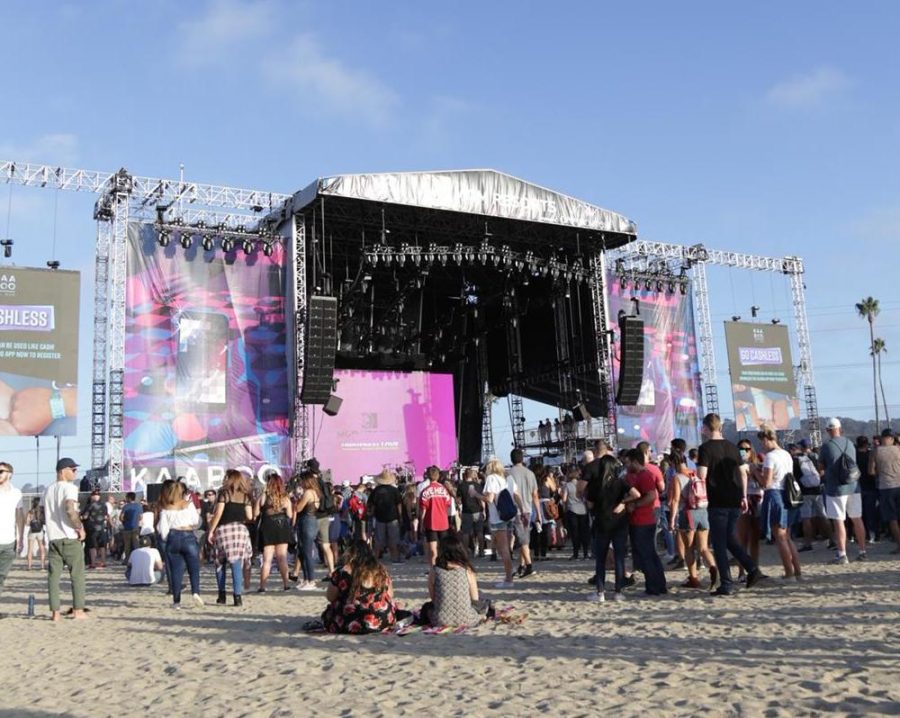 Billy Idol and Earth, Wind and Fire performed at the Grandview stage on Sept. 15. Photo by Tiffany Rihana.

With even more bands playing, the second day of KAABOO Del Mar was even hotter than the first.

A total of 40 different performances throughout the fairgrounds were scheduled for the day. Some attendees wished they could be in two places at once, since some of the best shows overlapped, like Imagine Dragons, Cake and Earth, Wind & Fire.

Festival participants were mostly from San Diego, but many people came from all over to take part.

Lina Borozzina grew up in Odessa, Ukraine when it was part of the Soviet Union. She loved rock growing up, but said her first music festival, Lollapalooza, “opened me to new freedoms of expression and fashions that I never imagined possible back in the Soviet Union.”

Borozzina attended KAABOO for the first time and really came to see Billy Idol, who she had never seen perform.

“‘White Wedding’ was my marriage song,” said Borozzina. “I walked down the aisle to it.”

The hardest part of Day 2 of #KAABOODelMar is picking which shows to watch. If you picked N.E.R.D. or Melissa Etheridge, you might have missed Billy Idol's "White Wedding," a crowd favorite. Video by Brian Mohler of @SDCityTimes. pic.twitter.com/XrY2CspAnQ

Said Borozzina: “The crowd really loved it when Dave Grohl switched spots with the drummer (Taylor Hawkins), who sang the classic ‘Under Pressure.'”

Stephanie Leung’s favorite performance at KAABOO so far was Halsey. She said Bebe Rexha was awesome but she was really stoked to hear Katy Perry sing “California Girls” on the festival’s final day.

Lueng is from Boston but went to school at USD. The 30-year-old graduated six years ago in marketing and has since lived in New York, San Francisco, Hawaii, and Savannah, Georgia.

During her nomadic adult life she’s been to a number of festivals like Outside Lands, SXSW, Stagecoach and Tortuga.

“KAABOO is more quaint,” said Leung. “It’s not as wild as other festivals.”

Dylan Kubina, a musician living in Olympia, Washington, came to KAABOO excited to see Cake. She left behind demos of her group, Velvet Grapes, in unique locations around the festival.

From Texas, 21-year-old Amanda Cunningham came with friends. She waited to see Bebe Rexha but primarily came to see Post Malone and Wiz Khalifa. She enjoyed the mosh pit at SWMRS.

“I’ve never been to San Diego,” said Cunningham. “It’s been a lot of fun. I wish I lived here.”

KAABOO brings in an array of artists from all over. It also brings cool and interesting music lovers.

As San Diego transplant John Labonze said, “KAABOO is a laid-back, fun California experience with a packed crowd of all ages in a family-friendly environment.”