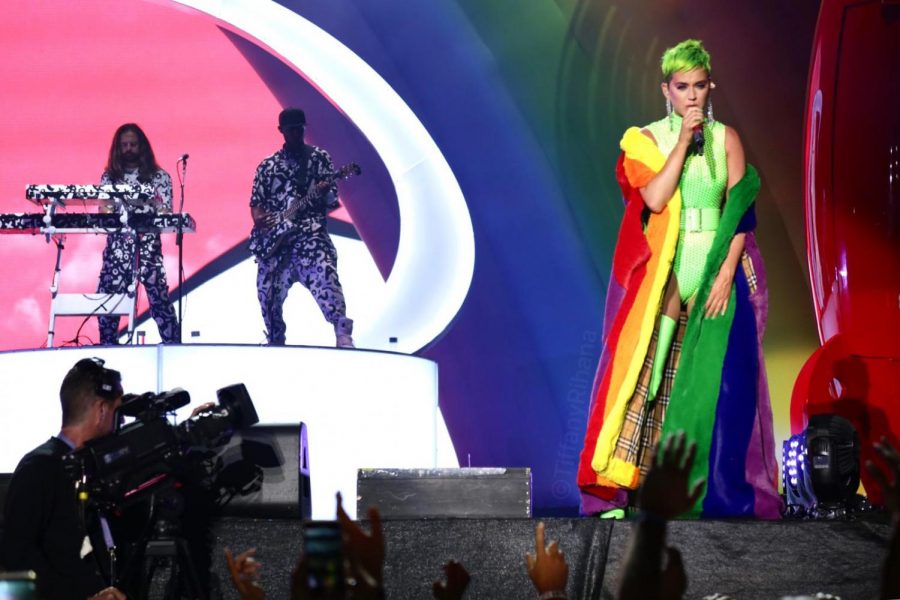 KAABOO Del Mar wrapped up on Sunday evening to the tunes of big-name stars like Katy Perry, Wiz Khalifa and TLC.

KAABOO was a wonderful experience for everyone who took part, but the overwhelming enjoyment was exhausting, too. Hot days, long nights, and hopping back and forth between stages took a toll on music lovers like a 3-day marathon.

When The All-American Rejects performed “It Ends Tonight,” workers jokingly sang the chorus, looking at each other with relief on their faces.


Perry’s colorful performance began as soon as she stepped out of a red rocket ship onto the space opera-themed stage sporting absinthe green-colored fairy hair. Perry had numerous wardrobe changes during her 90-minute performance with vividly rich, vibrant and animated outfits.

Die-hard festival-goers stuck around for Perry’s theatrical set, which ranged from emotionally breathtaking, melancholic heartbreak to feel-good dance-alongs. A number of KatyCats also purchased Katy Perry Cares tickets just to see her performance, which raises funds for MusiCares, a charity established by the National Academy of Recording Arts and Sciences to provide services for music industry professionals in need.

During the performance, Perry talked about playing small cafés to sold-out super venues like KAABOO, laughingly stating, “I think we made it.”

Fellow style icon Khalifa gave a smoke-filled performance and received a lot of love from fans who sang along to his Taylor Gang anthems. At one point he brought the “doobie brothers” on stage — not the band, but 6-foot inflatables of his signature RAW spliffs to pass around.

TLC’s performance of “Waterfalls” may have been the biggest crowd-pleaser. Heads bobbed and feet shuffled to Alice in Chains and Slash performing alongside Myles Kennedy.

Jaws dropped seeing Robert Plant sing “Going to California.” At 70, Plant didn’t miss a beat, addressing his children as the grandfather of rock.

KAABOO got positives reviews as an amazing festival to play at and attend, but it was also a great venue to work. During breaks, staff members got to sneak off and catch performances from their favorite musicians in VIP lounges and listened to incredible music while they worked.

Sergio Castillo, 25, from Los Angeles, worked security at the event. As an Outkast fan, he was pleased he didn’t have to pay to see Big Boi.

“I was on the clock but bobbing my head the whole time,” Castillo said.

Jordan Robinson of La Mesa enjoyed more than the music. He really enjoyed the art available, as well as its affordable prices.

“The art here is insanely cool and affordable,” Robinson said. “I got a rad hand-painted skateboard for just $75.”

“What sets KAABOO apart from other festivals is the uniquely original art, most of which is done live,” said Rodriguez. “I’m watching a chick spray paint an awesome mural as we speak. It’s so pretty.”

KAABOO has been partnered with Pangeaseed since 2015, which promotes ecological sustainability through ARTivism. Akira Biondo encouraged students to check out their Artist for Oceans program called Sea Walls, which has painted over 25 different large-scale murals around San Diego.

With the wide array of artisanal foods and adult beverages, it was easy to overindulge. Those who did could recover, rehydrate, and reboost with IV drips, pushes and vitamin shots from PointInfusion in three different areas.

“We usually offer everything from CBD water to CBD lotions,” she said.

Future Motion let attendees play around on its surprisingly fun self-balancing skateboard One Wheel, which rode more like a pavement-based snowboard that a rider could also do tricks on and take off-road.

“Working with One Wheel isn’t work at all,” employees Zaire Armstrong and Kade Vlacos agreed. “It’s just about having and promoting fun.”

KAABOO Del Mar 2019 is scheduled for Sept. 13-15. Early bird passes are available on the KAABOO website.