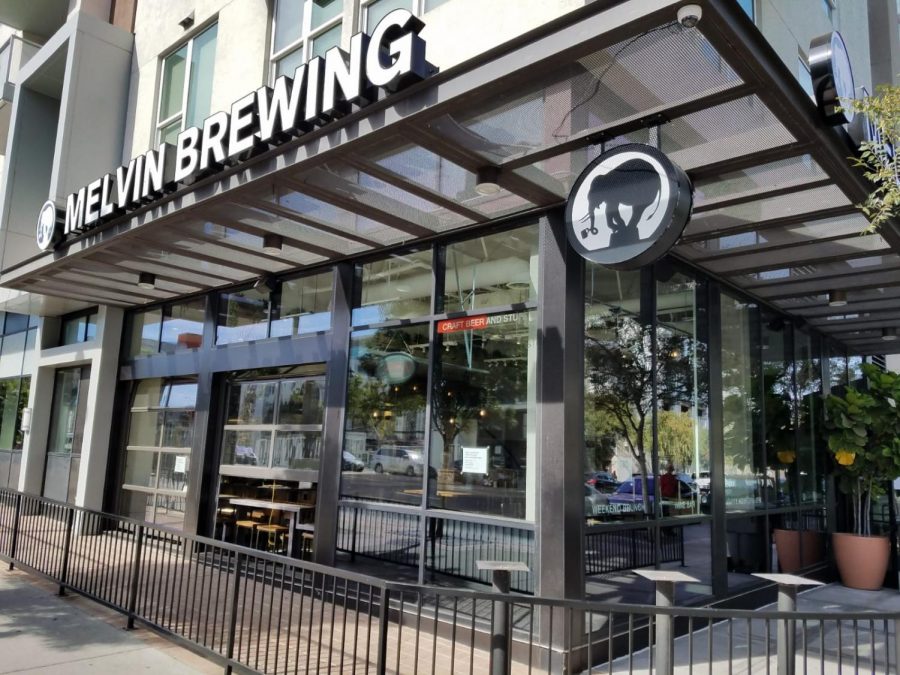 Melvin brewing is getting ready to open its stylish East Village location featuring a seven barrel brewhouse. By Brian Mohler.

Duck Foot Brewing and Amplified Ale Works are already adding new life to the striving East Village scene and more breweries are getting ready to open.

Here’s what you need to know about the new breweries in downtown.

Duck Foot is quacky. Its wifi network is “goduckurself” and the password shared is welovebeer.

The beer is loveable. West Coaster, The San Diego Union-Tribune, and CityBeat all give Duck Foot favorable reviews.

The beer is especially loved by people with sensitivities to gluten. Owner Matt DelVecchio, who refers to himself as “Head Quack,” has celiac disease.

Duck Foot’s new East Village taproom and kitchen is located on Park Boulevard, at the Park & Market trolley stop. Its kitchen is gluten-free — even the Pão de queijo, a Brazilian cheese bread that pairs well with any of the beers.

The specialty wood-aged beer takes on hints of molasses from the barrel that makes it seem like a high gravity beer. But at under 7 percent ABV, it’s crushable for being barrel-aged.

Equally notable are the bourbon and rum barrel-aged versions of its chocolate hazelnut imperial porter, London Calling, and the red wine barrel-aged Ape-ricot Saison, a collaboration with Culture Brewing.

Ape-ricot was brewed with Belgian malts, rolled oats, coriander, orange peel, orange blossom honey and apricots. The aroma is full of fruit and esters, but the honey and coriander give the saison a sweet and spicy taste with some lingering sour tingles in the back of the palate from wine-barrel aging.

Duck Foot hosted a release party on Oct. 13 for another collaboration called Fifth Suit, a French-style bière de garde. The beer is based off the recipe of 2016 American Homebrewer Association homebrewer of the year Nick Corona, who is turning professional when his Five Suits Brewing opens in 2019.

The bière de garde, which features moderate fruity esters and a toffee-like finish, was also a feature beer of Not-toberfest at Duck Foot’s Miramar brewery on Oct. 20. Not-toberfest benefited UCSD Health’s celiac disease research and was sponsored by Brewbound.

Amplified took over the former location of Stella Public House and Halcyon on Island Avenue.

The venue rocks a music-inspired environment and its large patio has a great outlook over Faultline Park.

Amplified won a gold medal at the 2016 World Beer Cup for its Whammy Bar Wheat, which has several fruited versions now like Tangerine and Raspberry. So far, it has avoided making any double whammys.

The original Whammy is clean and American tasting, without the esters or phenols found in other wheat beers like hefeweizen or witbier, due to using California ale yeast.

In addition to the 30 taps of in-house and unique guest beers, it also has wines on tap and a full bar.

The walk-in side of the facility, Amplified Coffee Works, blends coffees and relieves pastry addictions starting at 7 a.m. on weekdays, which makes Amplified worth stopping by both before and after class or work.

Amplified’s kitchen offers kebabs and woodfired pizzas. The tacos for its Tuesday deal are affordable, savory and easy to wolf down. The tacos pair great with beer, and the tajin-rimmed margaritas made with Sauza tequila, Cointreau, simple syrup and lime juice for $5 are libatious.

Amplified bartender Christian Yager studied biology at San Diego City College. He is excited for Amplified’s Acid Vault, which is currently in the works.

“The Acid Vault will be a barrelhouse underneath the location with a stage for live music shows,” he said.

Yager used to drop by Monkey Paw Brewing, the original East Village brewpub, after class with his friends.

“I was bummed to see them shut down, but now Amplified is serving the needs of those in the neighborhood,” he said.

There is a Department of Alcohol Beverage Control posting on Monkey Paw, which has the beer community speculating something will soon replace it.

According to Coronado Brewing Company CEO Brandon Richards, the ABC posting on Monkey Paw is for their original purchase.

“I don’t know what Monkey Paw is going to turn into at this point,” he wrote in an email. “We have not solidified a plan.”

The Wyoming-based brewery began humble, using homebrewing equipment and turned a restaurant called Thai Me Up into an award-winning brewpub with a let-loose attitude.

Melvin has been growing past some of its bro-culture adolescence. But it looks to continue brewing award-winning beer, while playing 90s hip hop music and showing kung-fu movies.

The West Coast IPA will feature a lot of Citra, Azacca and Hopsteiner Experimental #09326 hops. A portion of the proceeds will benefit Alpha Project outreach programs in East Village.

“We’re stoked for the collaboration IPA to be released to the neighborhood,” brewer Bobby Oliver said. “Melvin is excited to be in San Diego.”