"Coco" is authentic and moving 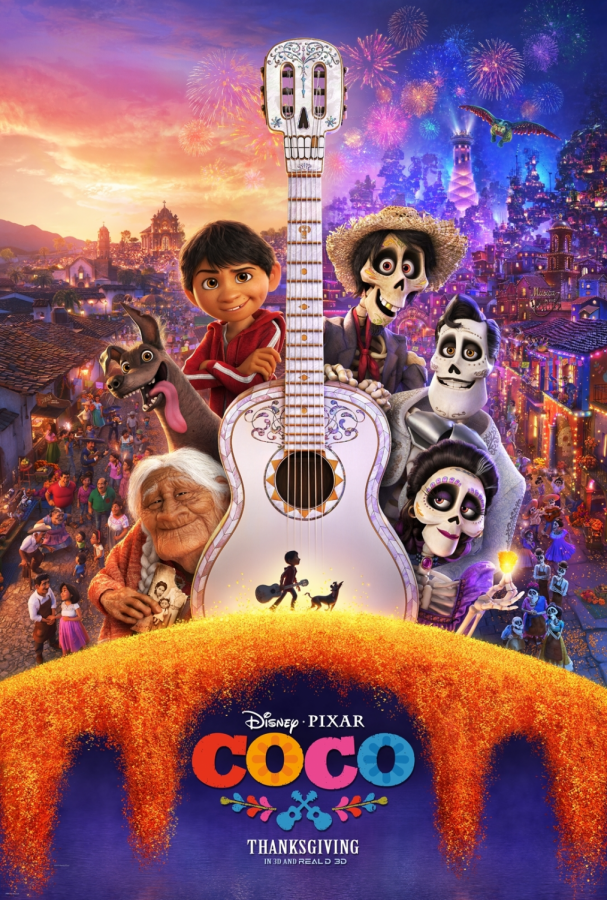 Making a movie about a specific cultural tradition and remaining true to its authenticity is quite a challenge, and Disney PIXAR was up for it with the release of its newest movie “Coco.”

Directed by Lee Unkrich (director of “Toy Story 3” and “The Good Dinosaur”) and co-directed by Adrian Molina (storyboard artist of “Toy Story 3” and “Monsters University”), “Coco” focuses on the story of Miguel, voiced by Anthony Gonzalez, a young aspiring musician living with a family that has despised music for several generations after his great-grandparent prioritized music instead of family.

Trying to change his future and “live in the moment,” Miguel travels to the “ciudad de los muertos” (land of the death) and encounters Hector, voiced by Gael García Bernal (“Letters to Juliet” and “You’re Killing Me Susana”), who helps him find his way back home while both also realize that family always comes first.

Inspired by the Mexican tradition of Dia de los Muertos (Day of the Dead), “Coco” not only shows how the holiday is celebrated every year in Mexico, but also the values that are shared by the country, its perspective of death, and its relationship with music.

Day of the Dead is a day to remember loved ones who have passed away, with an altar where pictures of the departed loved ones is set up on a table with their favorite food and drinks, bright orange cempasúchil flowers, “calaveritas de azúcar” (sugar skulls), “‘papel picado” (colorful Mexican decorative paper) and other items they loved.

On Nov. 2 it is a tradition to visit the loved ones graves to talk to them, bring them candles, offerings, and cempasúchil flowers. “Coco” was able to pay homage to this tradition by representing this scene as well as the connection to the underworld land of the dead.

Music is an important part of Mexico, and the movie was able to represent that through Miguel as a musician, as well as with Ernesto de la Cruz, voiced by Benjamin Bratt (“Despicable Me” and “Doctor Strange”). Also characters were inspired by real Mexican mariachi musicians such as Pedro Infante and Sergio Negrete, both remarkable musicians and actors from the Golden Age of Mexican cinema.

Most of the film has an all-Latinx voice cast, with the participation of Mexican actors Jaime Camil (“The Secret Life of Pets”) and Carla Medina (“Zapping Zone”). The use of Mexican slang and jokes throughout the movie lets the audience submerge themselves in the culture and feel like they are part of the tradition.

“Coco” has been criticized for being similar to “The Book of Life”, a movie produced by Reel FX Creative Studios in 2014, which also touches on the celebration of Day of the Dead.

Both movies include music, love and the tradition of Día de los Muertos, but “The Book of Life” circles around a love triangle between its three main characters – Manolo, María and Joaquín – while “Coco” focuses on the true meaning of family.

“Coco” was first released in Mexico during the Morelia International Film Festival a week before Dia de los Muertos. The movie will open in theaters in the United States on Thanksgiving day. Be sure to take some tissues and be ready to feel part of Mexico and its beautiful and colorful traditions.