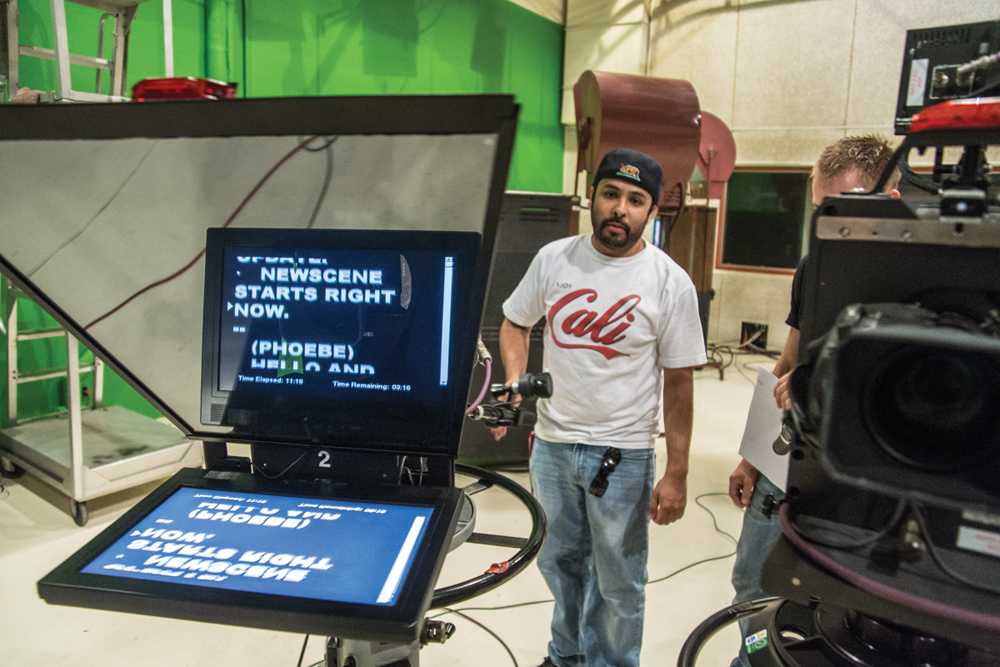 When students walk into the Radio and Television computer lab in C-128 at 9 a.m. on a Friday morning two things are apparent right away.  First, it is boiling hot inside the computer lab and second, though the atmosphere is light, everyone in the room is clearly working on something important.

Students are finalizing scripts, editing videos, setting up the studio and Laura Castaneda, Executive Producer and staff adviser is, in her own words, “hollering at students who arrive late.”

They are working hard to put on this week’s broadcast of City College’s Newscene. For those who don’t know, Newscene is a 30 minute newscast produced entirely by students that airs at 6 p.m. every Friday on ITV, local San Diego channel 16.

Newscene covers both local and international news, as well as breaking news which must be updated throughout the day.

Stories are assigned between Monday and Wednesday each week, with scripts due on Thursday. Packages, which are prerecorded news segments, should be finished before the day of filming, though some students are still doing final edits to their pieces Friday morning.

Newer students shadow the more experienced students until they get comfortable with each of the positions and then after that, students rotate through all of the different positions, that including talent, writers and producers.

They do things the old-fashioned way. All the technology they use is outdated, such as the teleprompter, which still uses floppy disks.

“I don’t know what we’ll do if they stop making floppy disks,” Castaneda jokes.

Luckily, in 2014 the entire building will be gutted and a new studio will be built. In the meantime, using older technology forces students to learn traditional formats and prepares them for working on real life news shows.

At the same time that students are writing and editing, they are lighting the studio. Everyone who enters the studio is immediately put to work doing everything from sitting at the anchor desk so the lighting crew can properly gauge the amount of light needed, to adjusting the lights, to making sure the lights that are needed are plugged in.

After that, the crew tests all the audio. Chris Acedo, the Production Manager and City adjunct faculty, has come into the studio and taken over, making sure everything is ready to go.

the students take time to eat lunch. There is a sense of urgency in the air as some students still work on finalizing the rundown of the show and get the remaining video tapes together.  Breaking news is still being updated.

About half an hour later, everyone returns from their lunch break and there is a lull in activities. James Smith, a returning veteran of Newscene, calls it, “the calm before the storm.”

The talent, or students who will be on camera, all go to the green room, Saville Theatre’s dressing room,  to get changed.  Everyone else gets in position in  the studio and in the control room. There are two shows filmed every Friday.  The first will air the same night at 6 p.m.  The second is a practice show produced by the less experienced students.

The only segment that gets a practice run before filming the weather segment. Once they begin filming the rest of the show, even if there are mistakes, it must be shown on television. There’s no chance for a do-over.

The actual filming moves surprisingly quickly. Even though one of the anchors has problems with his headset the show goes on. It is incredibly chaotic both on the set and in the control room.

At 3:20, the first show is finished and it is time to shoot the second.  The atmosphere is much laid back now.

As student Aliya Bora says, “The stress level is way down now that we’ve finished one show.”

Castaneda begins to leave with the tape of the first show to hand deliver it to ITV’s production studio. She takes a moment to summarize the days events.

“It is fulfilling to see them not have such a great show because each week they will get better and more comfortable. You see the growth. Today was not the best show, but it will get better. I see it happen every semester,” Castaneda said.