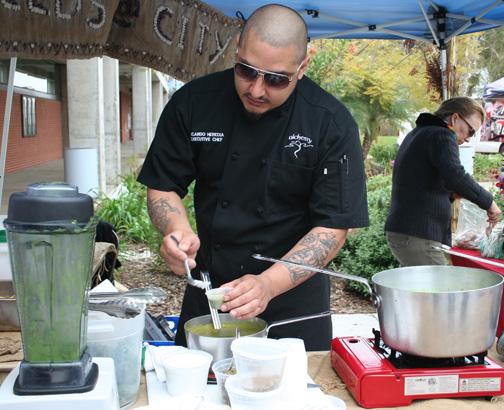 A fresh street food cooking demonstration had students and staff gathered around the Gorton Quad, on March 21, to sample the free mouthwatering Vegan Jamaican Ital Soup with Kale that was prepared by Executive Chef Ricardo Heredia.

Many students were impressed by the soup’s simple organic ingredients, easy instructions and piquant taste.

Ricardo Heredia, executive chef at South Park’s Alchemy Restaurant, provided quick and simple instructions on how to make his Ital soup using the freshly grown produce from the [email protected] urban farm in his cooking demonstration.

Heredia’s Ital soup (ital being a style of cooking practiced by Rastafarians), was inspired by the produce available during winter. With kale being one of those vegetables, Heredia wanted to incorporate it into his soup.

“Kale is good for you. Lets eat more kale,” Heredia said loudly while stuffing kale into his Vitamix blender.

Heredia started his cooking demonstration by blending blanched kale into a Vitamix. “Maximize the amount of green vegetables in every serving,” Heredia said. Then he sautéed organic garlic in a pot, and poured the purified kale over the garlic. He then tossed in some natural diced potatoes, 2 quarts of coconut milk, salt and pepper to taste and slowly stirred the ingredients.

Heredia also added a Scotch bonnet, a predominant pepper in Jamaica, for heat, and spinners, rolls made from flour and water. He placed the pot to the side to have it simmer for 30-45 minutes, but took out a previously prepared pot of Ital soup and served it with fried ocra, drizzling coconut milk on top.

“Get that green in your life,” Heredia said. Heredia went on how crops lose their essence when they are manufactured and shipped out to consumers. But when the produce comes directly from the ground to the restaurant, it is the best and fastest route to deliciousness.

“The crops are not impaired, there is no pesticides and it’s good for the environment,” Sotiros said.

Chef Ricardo Heredia also runs a catering business and is a culinary educator for the youth at Scratch Culinary Education.