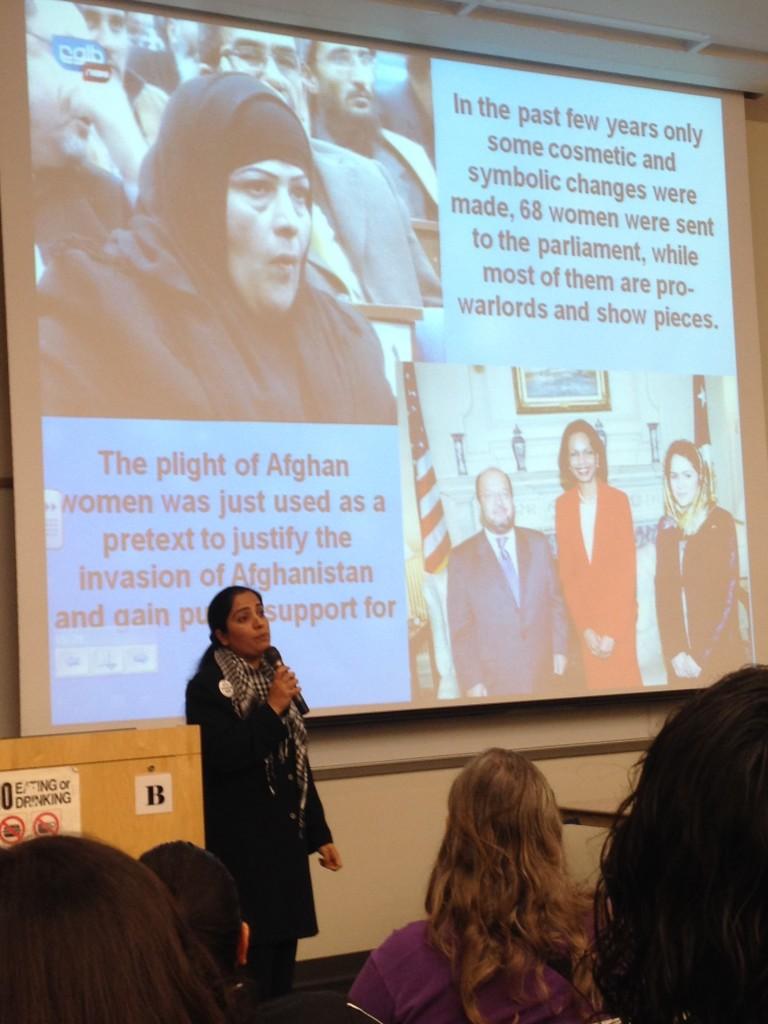 Respectable Afghan humanitarian and former member of Afghan Parliament, Malalai Joya graced City College last month to spread the message of her ongoing crusade against violation of women’s rights in Afghanistan that was created not only by the carnage of an ongoing civil war, but also by the overwhelming number of warlords in the area.

Justin Akers Chacon, a professor of the Chicano/a studies department and both the history/ political science and sociology departments invited Joya to City College. Campus clubs such as BEAT and Visionary Feminists also played a part in bringing Joya.

Local sponsors were the San Diego Coalition for Peace and Justice, who passed a box around the crowded room for donations and the United National Antiwar Coalition.

Joya offered a glimpse into the daily perils that Afghan woman in particular have to face in a country ravaged by war.

The presentations given by Joya via slides and a short video showcased her efforts, the catastrophic effects of war and violence plaguing the country and addressed the issue of the booming number of warlords and corrupted government officials.

“A Woman Among Warlords,” the name of Joya’s presentation speech and the title of her 2009 memoir, addressed and acknowledged the 12th anniversary of the US/NATO occupation in Afghanistan. The chaos that followed after the occupation was one of the central themes in Joya’s speech.

“Education is the key against occupation and one in emancipation. So I’m here to open their eyes as to talk about the consequences that was only more crimes to women’s rights, human rights violation, looting off of our resources turning it into a mafia state.” said Joya.

Joya explained that Afghan women in particular have become the ultimate targets of hardships by being exchanged for opium in what has become a growing trade in Afghanistan. She also shared tragic stories of injustices involving young girls who have been victimized by government officials.

Joya has been the fearless face of the Afghan human rights movement and continues to have the burning desire to fight injustices in Afghanistan, despite death threats and an assassination attempts.

Joya has been clear she is not going to stop her crusade against violence and human rights violations and has continued to be involved in protests and give speeches.

She has endlessly toured the U.S. spreading her message in prominent universities and colleges, such as UC Berkeley and University of Massachusetts.

”This is one of the progressive colleges that my supporters said about,” Joya said, “They were right as I saw how amazing people are here and they gave me more courage, determination and hope and support. I pass the love of my people to them.”

For more information about Malalai Joya and her mission visit www.malalaijoya.com/dcmj.