City celebrates and honors the dead 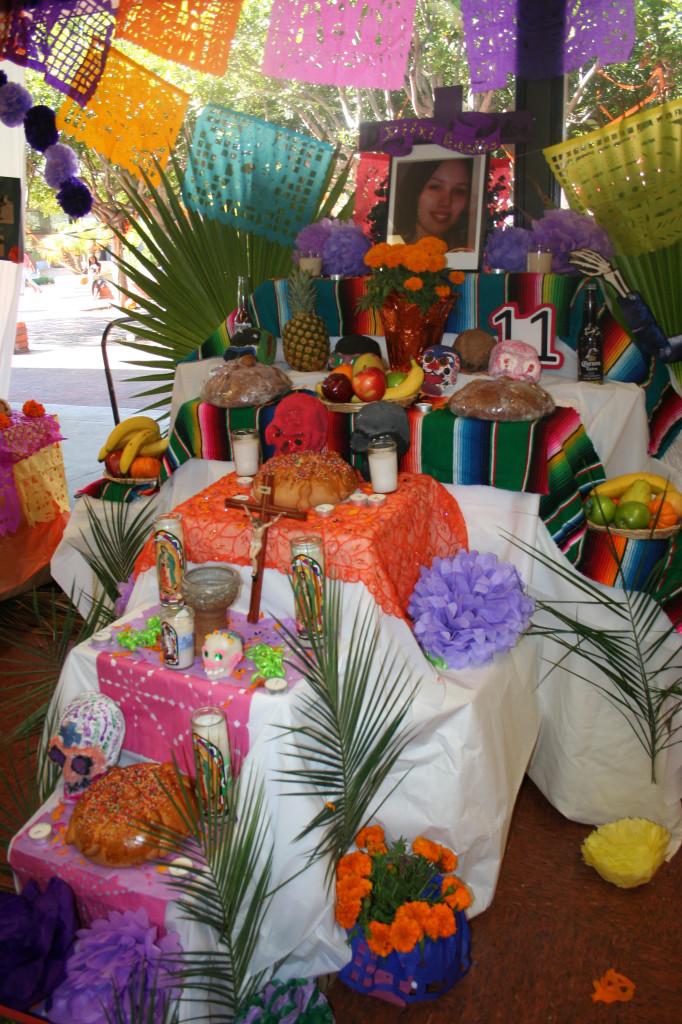 One of many different altars that were on display in the cafeteria to commemorate Dia de Los Muertos. Altars and offerings are created to honor loved ones who have perished. Michelle Moran, City Times.

The Day of the Dead, or Dia de los Muertos, is a traditional Mexican holiday celebrated on the first two days of the month of November.

The cafeteria was already a full house by early noon, decorated with large and colorful altars in memory of deceased loved ones from the San Diego community and also both the national and international community.

One altar that particularly stood out was dedicated to the young victims of the elementary school mass shooting in Newton, CT last year.

“I have helped coordinate this event for the past two or three years,” said Professor Rosalinda Sandoval of the Language Department. “City College has been doing this though for many years now.”

The turnout has also been increasing every year, creating a repetitive demand for the need of more and more space to house the annual event.

“ Every year is getting bigger. It started with a small section in the faculty lounge next to the student cafeteria. Now we had to move it,” said Sandoval. “ … And even then, we have so much people and activities this year that we may need even more space for next year’s Dia de los Muertos event.”

In spiritual tradition, the spirits of all deceased people return to their families on these two days. In order to return, their spirit must be able to find their way back to their families, usually by the scent of incense, marigolds and flowers.

Once they arrive, they may be thirsty or hungry, which is why their living relatives leave food and water at their gravesites. Other items considered to be offerings to the dead are usually items related to the character of the deceased person, such as their favorite cigarettes, books or liquor.

On that day, death is nicknamed “the bold one,” “the one with the showing teeth,” “the slim one,” “the dusty one,” and so on. All of these nicknames for death refer to the physical appearance of the skeleton or of the grim reaper. When referring to the physical act of death, substitute phrases are used in speech and in poems, such as “death took him,” and “he hung up his tennis shoes.”

Constructing altars, exchanging candy skulls, making special toys such as skeleton puppets and coffins, baking the special Bread of the Dead, special dances and plays are all traditions combined in this respectful yet festive celebration of death.

Today, this celebration extends itself to Spanish-speaking U.S. communities that typically celebrate the American and European tradition of All Hallows Eve and Halloween.

“For example, my father died 15 years ago. If I want to honor him, I put his photo on the altar first and then add on artifacts related to who their character was,” explained Sandoval. “If his favorite beer was Tecate, you put a bottle or can of Tecate on the altar. Or if he liked cigars, you put cigars on the altar. If he was also Catholic, you add on Catholic decorations to the altar.”

The theme of death permeates all aspects of Spanish-speaking culture and life. The acceptance of death is quite relative, since death is inescapable. Therefore, people have learned to live with such a realization by building defenses and releases that are easily seen within the use of jokes and games regarding the honest face of death.

“What the holiday means to me personally and many others is basically the connection between those people that we honor,” concluded Sandoval.