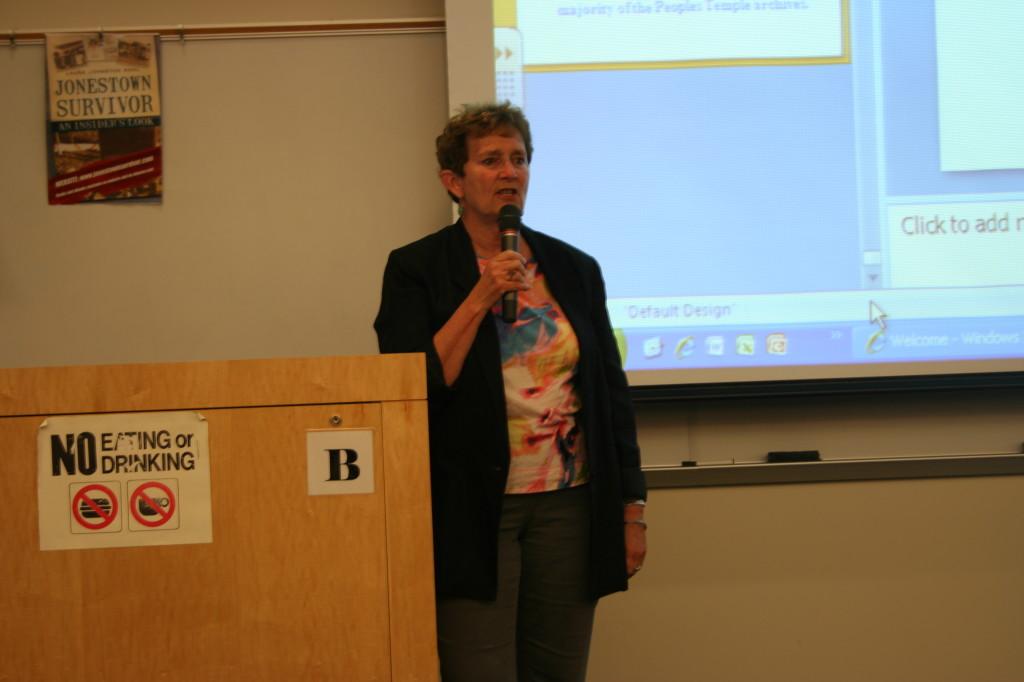 On Nov. 18, 1978, Americans were shocked by one of the most traumatic incidents in history.More than 900 people died that day in Guyana, in a location called Jonestown, from an apparent mass suicide.Many of the victims were children.Jonestown was located in Guyana, a northern part of South America and was run by a religious cult who referred to themselves as The Peoples Temple.On Oct. 29, City College had the honor of having Laura Johnston Kohl, one of the few remaining survivors of the tragedy, speak on campus.Kohl was part of The Peoples Temple. Temple was led by Jim Jones, who instructed those innocent people to take their lives. Kohl’s presentation drew a large audience to room V-101. She began with a brief history about her life and how she came across The Peoples Temple. To this day, talking about this subject brings tears to her eyes and she said she is still trying to cope with how the tragedy happened and why she survived.“I really felt like I put him [Jim Jones] under the microscope for two years. I watched everything that he did. He was a very simple, practical man on the personal level … Behind the scenes, of course, he was a egomaniac,” said Kohl.When the group started Jonestown, they had a few houses and some electricity, living a very primitive lifestyle. By the summer of 1978, there was 900 people living there, so it was difficult for them to build the community to support everyone. At the end of October 1978, there were approximately 1,000 people living in Jonestown.”It was a community of my dreams with people of all different races. Many of the things that went on in Peoples Temple were things that I felt I really wanted to have part of my life,” said Kohl. Kohl went on to talk about how Jones started to show a darker side, one not visible to the public. He was a drug user, abusive to his family and very controlling. “His secretaries and mistresses wouldn’t let him out of their sight if he [Jones] wasn’t coherent,” said Kohl. “So they would keep him from the rest of the community when he was going through his paranoia in his deepest drug addiction, they wouldn’t let him be seen in public. We only saw when he was articulate and on top of things, which was less and less of the time.”Jones was also responsible for the murder of U.S. Congressman Leo Ryan.Ryan visited Jonestown and was killed shortly after by a sniper on Jones’ orders.After that attack, Kohl said that Jones manipulated his followers into drinking a poisonous beverage —- laced with cyanide —- so they could all commit suicide. As he distracted the adults about why they should leave their lives behind, his mistresses and secretaries gave poison to the children.Upton touching on this delicate part of the story, Kohl’s eyes began to tear up.Kohl survived because she and a few other people that were part of the group were staying in Georgetown, just a 24-hour boat ride away from Jonestown. She and a few other people heard about the mass suicide and immediately went to get the Georgetown basketball team, which included two of Jones’ sons. They were all instructed to commit revolutionary suicide, as well, but none of them wanted to go through with it.Although this was a difficult subject to talk about, Kohl’s presentation was very empowering and gave major insight on a part of history that not many people know about.”The biggest part of my experience in survival is that I need to be involved to make the world better. I can’t take a break … I have to do what I know I have to do,” Kohl said. “So it’s made me more of an activist than ever because I’ve seen the world that can be really wonderful and integrated and treat people well and I’m really not satisfied with anything less; that motivates me every day.”She has recently published a book, titled “Jonestown Survivor: An Insider’s Look.” It is an autobiography about her reflections and survival in The Peoples Temple. For more information, please visit www.jonestownsurvivor.com