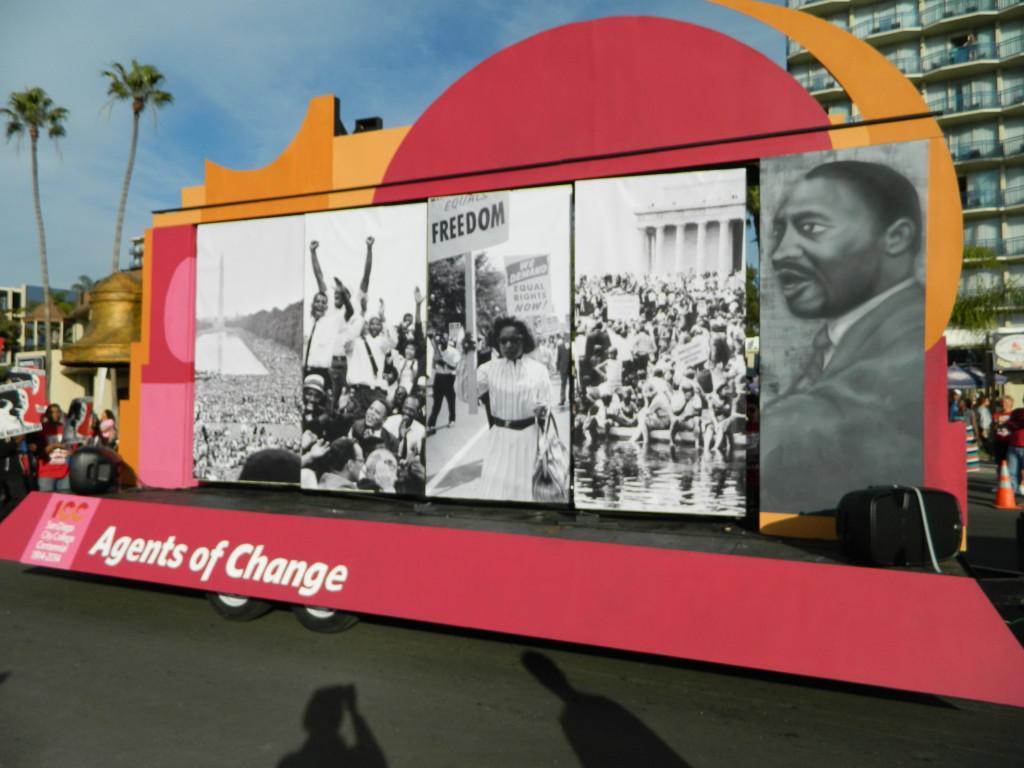 The float featured imagery from the 1964 March on Washington and a rendering of Dr. Luther King Jr. by the City College graphic design department.Photo credit: Christopher Handloser

Those words – words that Dr. Martin Luther King Jr. would’ve been proud to cheer – adorned the towering columns as they rotated within the center of the City College MLK Day float. Members of the Associated Students Government (ASG), the graphic design and drama departments, along with several other students and faculty, contributed an incalculable amount of time and thought into the float in the last three months.

Even though the float was the centerpiece of the day, the City College presence in the 2014 MLK Day Parade more so accentuates the endless possibilities attainable when talent and will converge in accord.

“The reason our float is as good as it is is because we have a great graphic design department and a great theater department,” stated ASG senator Zane Hunker.

The float was based off a miniature model conceptualized by graphic design specialist Sam Spratt, professor Duane Gardella of the Drama Department, and ASG Webmaster and student designer, King Arthur.

Arthur also toiled with the help of Enactus co-adviser and business professor Leroy Brady, among others, adding the sweat and physical labor to the construction.

Dance instructor Ruby Wilson choreographed and led a routine that had participants spelling out “City College” while grooving to the music bumping from the float behind them – music being mixed by ASG Senate president and Music Club founder Jose Malo.

At the heart of it all, hundreds of proud City College students marched behind and alongside the float, holding signs painted to replicate the ones raised by protestors in the 1964 March on Washington. They also wore bright red shirts with MLK’s likeness and the equally retro message “Agents of Change.”

However the specific message of this day – both easily observed from the effort and read from the replicated bell off the stern – was and still is, “Let freedom ring.”