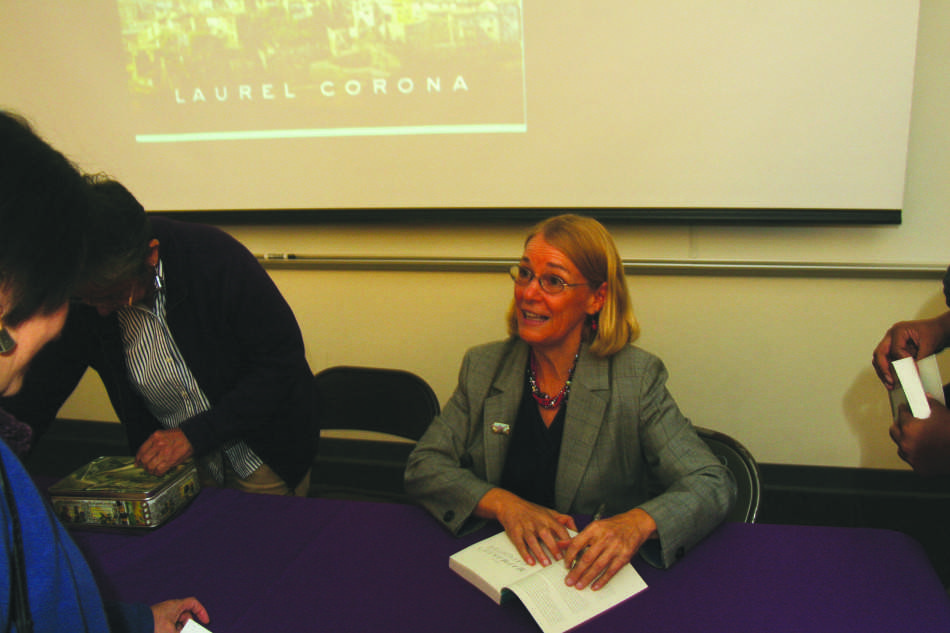 Professor Laurel Corona is an accomplished scholar, award-winning novelist and globe-trotter but her true passion is to advocate for every student to get an education, regardless of gender or ethnic background.

She is winding down her full-time career at City College, where she has worked for 24 years, most recently as a professor in Humanities courses.

Her journey to the classroom began in early childhood, when she anxiously awaited her older sister’s first day of class, eager to find out what was being taught.

“I loved the dictionary when I was little, looking up words and knowing what they meant. I always loved to read,” said Corona.

Both her parents were scientists but her mother, a chemist, chose to raise their two daughters while her father worked as a physicist.

They wanted their daughters to go The Bishop’s School in La Jolla, an all-girls’ boarding school at the time.

“I think they spent every last little bit of money so we could go; they never took a vacation; they valued the education,” she said.

Throughout her university career, which included a doctorate from the UC Davis, Corona said she felt female students were not encouraged, especially by male faculty.

An adviser discouraged her from attending graduate school, and one professor continuously asked her to pass out the cookies his wife had made. The same professor, she said, found ways to discredit her work because she was a woman.

Undaunted, Corona excelled, graduating as a senior with a citation for outstanding work in English and was the only woman in her program to finish her Ph.D., also in English.

“Learning is the second most exciting thing in life. The first is sharing it with others,” she said, returning to the classroom full time.

She’s held teaching and administrative positions at San Diego State University and at UC San Diego and since 1990 at City College.

She initially taught writing in the English Department, then became Dean of Student Services, and later returned to the classroom.

She stressed that it’s important for students to take such classes.

“The best thing that happens in college is students are forced to take courses they don’t want to.

“I don’t remember much of the classes in my major but I remember geology, sociology, psychology including a horrible human physiology class,” she said. “They were memorable because they were different and stretched me in ways that I would not have myself.”

She sees her mission clearly.

Though her classes may be heavy on lecture, she’s keen on getting her students to share their lives or tackle a controversial subjects.

Corona is sensitive to the needs of students of color. She worries that some parents want to support their children but don’t know how.

“It’s easy for them (students) to stop coming to school because there’s no one telling them, ‘Hey, why did you do that? Don’t do that,’” she said.

Outside of school, Corona is an award-winning author, first penning non-fiction books then moving into historical fiction. She recently released her fourth book n that genre, “The Mapmaker’s Daughter.”

The book tells the story of an elderly Jewish woman, Amalia Riba, the daughter of a famous European cartographer, on the eve of the expulsion of Jews and Moslems in Spain’s 1492 Inquisition.

City English Professor Chris Baron, also a writer, said he enjoys Corona’s works as both his and her stories have included Jewish faith, culture and history.

“I think we share that, seeing it all fits into the history, telling the stories of the underdog,” he said.

All the main characters in her historical novels have been women because she feels they have been forgotten and undervalued in society.

“I’m a feminist in that I feel positively about women, not in the finger-pointing men sense,” she commented.

In her books, she paints pictures of how women have thrived because of their strength and creativity.

“Women know how to form communities; it’s the thing we offer the world.”

At the end of spring semester, Corona will be retiring. She plans to spend the next year voyaging around the world. Then she plans to be back at City to teach a class or two.

Recent years have seen her lecture on luxury cruises during summers to educate travelers on cities they visit.

She doesn’t know yet what she will write about next. She looks forward to discovering new things about herself as a writer and educator. After all, those of her life-long passions.