A celebration full of spirit 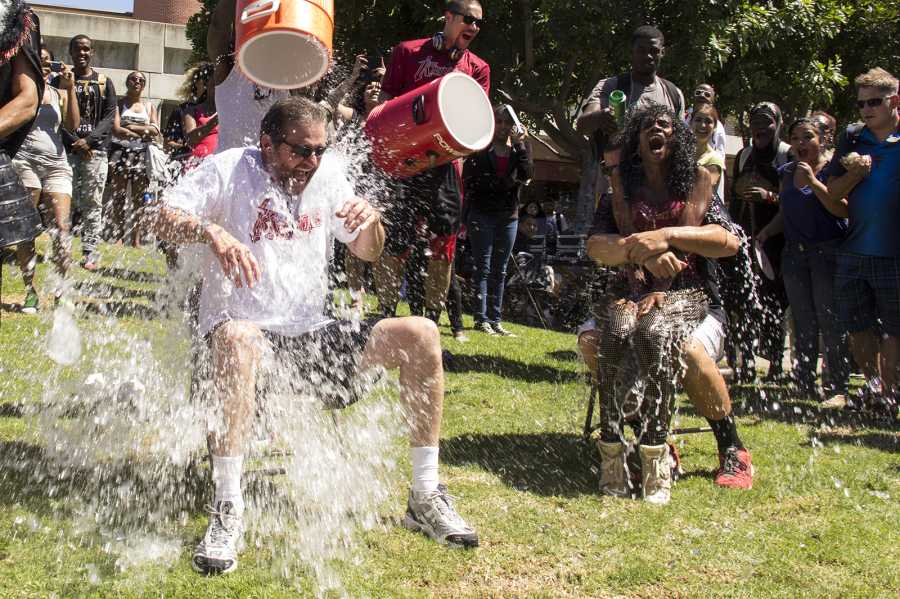 In honor of City College’s centennial, master of ceremonies Ruby Wilson created a dance called “The Centennial Shuffle.” Enthusiastic students went up on stage and danced along side Wilson before the event got started.

President Beebe made a grand entrance by being driven up in silver convertible Mustang. Seated in the back of the mustang was City College student Chris Burton in a knight costume.

“I volunteered to be the mascot and have previously dressed up as the knight for City College during the MLK parade,” Burton said.

After Beebe took his seat the dance off began, the first group who took the stage was the Associated Student Government. Carrying pom pom’s and donning leather jackets the ASG danced a ’60s themed dance to the song “Grease Lightning.”

Wilson then brought 63-year-old hip hop student Jacolyn Pollack. Pollack, who is confined to a wheelchair, danced with to Usher’s “Yeah” and the crowd went wild.

Wilson then took to the stage again and reiterated the importance of the event.

“This day is special, you have to understand this will not happen till another hundred years,” Wilson said. “People all came together at the last minute to make this possible.”

The next group to hit the stage was the Child Development Center’s classrooms one and two. About 20 children, ranging from 3-5 years of age, danced around to Pharrell’s hit song “Happy” while wearing knight themed capes.

The final group to hit the stage consisted of the men’s basketball team and the women’s softball and volleyball teams lead by Professor Allen Rivera, a former City College student turned faculty in the athletic department. They danced to Montell Jordan’s “This is How We Do It.”

“This is a once in a lifetime opportunity, it’s history in the making. Embrace and appreciate today,” Rivera stated.

After the dance off a student rapper who goes by Dre Da Flame rapped two songs, while the enthusiastic crowd of students and staff danced along.

Towards the end of the event Wilson once again took the stage, along with Beebe and another group of students and danced the “Centennial Shuffle” to Michael Jackson’s “Remember the Time.”

“They need to put up or shut up,” Beebe said of his ALS Ice Bucket Challenge nominees.