Teamwork at the park 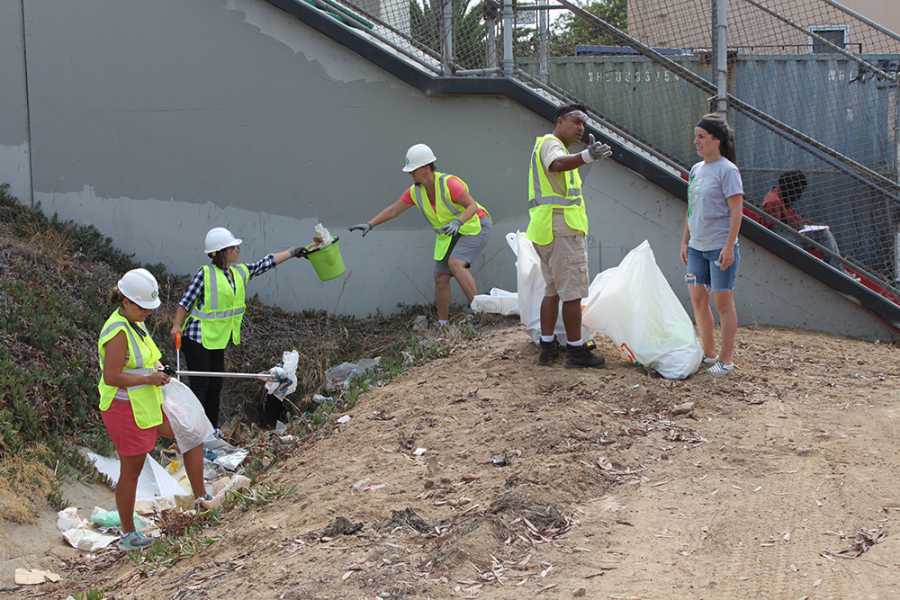 A group of volunteers joins together during a Sept. 20 event organized to clean up Cesar Chavez Park in Barrio Logan. Photo credit: Miguel Cid

Students met up at Cesar Chavez Park at 9 a.m. on Saturday, Sept. 20, to roll up their sleeves and put on gloves, leading a cleanup in the Barrio Logan community.

In the past years, City College faculty member and former student government President Beto Vasquez has led an annual clean-up of Cesar Chavez Park, Chicano Park and the surrounding streets in the Barrio Logan areas. However, this time around it was coordinated by a different City College group, The Future Leaders Club. Instead of waiting for the annual scheduled clean up, the group decided last spring to fill in for a bi-semester clean up.

The event was sponsored by I Love A Clean San Diego, the California Department of Transportation and the Port District, providing volunteers with gloves, neon vests, hard hats, pickers and trash bags along with other equipment.

“The Future Leaders Club consists of peer mentors and seasoned students trying to instill better habits in first year and inexperienced students,” said Cruz. “In my opinion these parks and the community are part of City College. We want to keep reminding the school that they are supposed to be looking out for and taking care of their community.”

The morning was slightly gloomy on the day of the clean-up, but the volunteers’ spirits were bright and their helmeted goggled faces held smiles. With coffee in hand, members of the community showed up early, along with Navy soldiers, students, a church organization and the Girl Scouts; all there to participate in the three hour community service.

After instructions were given from the cite facilitators and the sound of a deafening foghorn, the volunteers got busy picking up scraps of paper and cigarette butts in three different locations.

In the first hour, a volunteer in her 60s led a group of men to haul logs and pieces of wood from the shore connecting to Cesar Chavez Park to the dumpster. While her husband walked waist-high in the bay, no wet suit of any kind, gathered floating trash and debris.

Like many of the past cleanups in the neighborhood, artist and City alumnus Salvador “Queso” Torres showed up to lend a hand, sing a song and share stories of early years living in Barrio Logan.

The next cleanup will be held in spring at the same locations, hosted by members such as Cruz, Vazquez and others from City College.