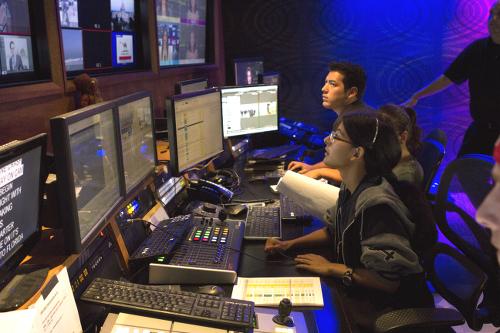 Teresa Romero Medina (front) was directing the Newscene program on Sept. 5 at UT-TV with the help of Roxana Paul (middle) and Dallis Ontiveros (back). Photo credit: Celia Jimenez

With the new C building underway projected to finish in 2016, Newscene has found a temporary home with UT-TV, where they kicked off their first production in early September.

Students who join Newscene this semester may not have a place to call home for now, but getting hands-on experience with industry standard equipment and studio temporarily is not so bad.

UT-TV and Newscene will be teaming up every Friday to produce a newscast that will air on Independent Television at 6 p.m. found on Channel 16 on both COX and Time Warner Cable.

“I think they did amazing considering the circumstances. We had a multitude of technical issues we were trying to work out being in another facility. But, we can’t complain because we’re in somebody else’s house,” department Chairwoman Laura Castaneda said about the new space.

News production can swing one way to the next and solving everything on air is something that can’t be avoided. This is a learning experience for the students. With alternating positions every week students are not expected to do the same thing twice.

“Friday is what we call the beast,” says professor Chris Acedo, who is a now a full-time teacher in Newscene and also works for local news station FOX 5.

He encourages students new or old that it’s about the team, mistakes are going to happen, but support will always be there. Acedo is a former Newscene student himself and shares that experience with how he teaches. He believes in the abilities of his students and wants them to succeed.

Slowly, benefits are being discovered working inside UT-TV grounds.

Dallas Richter, a student in her fifth semester at Newscene, explains “ … the biggest difference is how programming the editorial is easier with UT’s program they have.”

The UT set lights up, is clean, and sleek. Coming from an analog based production, Newscene is in a new environment with HD cameras and digital programming.

Jackson Sturlin, production manager for UT-TV, is excited to work with students in the control room.

“To have students be in space like ours, is a huge benefit, on a resume that’s what we look for, hands on experience,” says Sturiln

An internship program with the UT through Newscene has already developed with five students who joined over summer. This program is able to help mold student’s skills to be ready for the field.

Newscene has won six student Emmy Awards. With the bar set high, students and professors know they attain the skills that can reach further.

“This program has so much room to grow,” says Castaneda. “Allowing students the freedom to control creating their own stories, rotating positions weekly to keep you on your toes and executing the plan is all a rewarding process for the real thing.”

Cameron Brinkley, a summer intern and also a recurring Newscene student, see’s a bright future ahead, “We have all these people to learn from and they’re all willing to help us.”