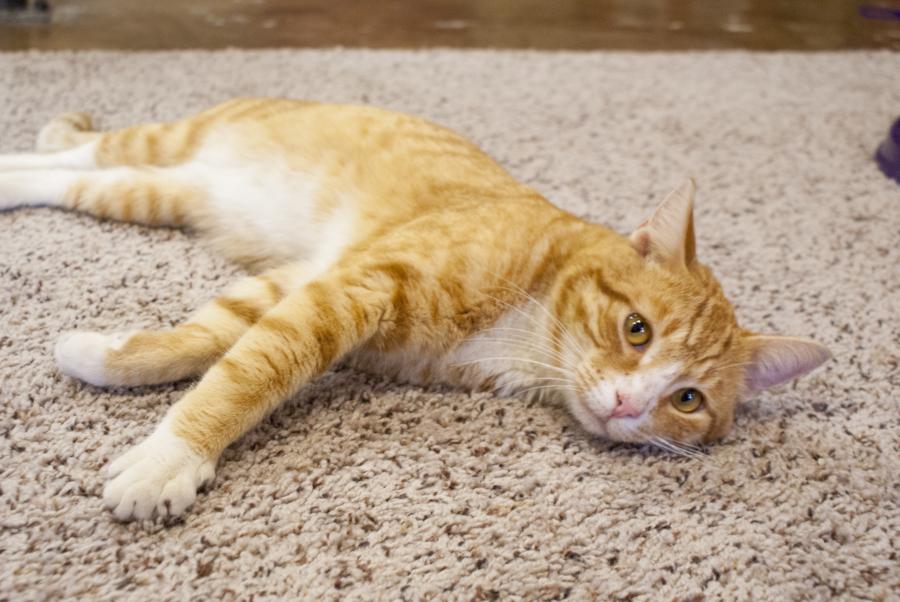 Garrett, an orange tabby cat, is one of the cats that patrons can interact with at the Cat Café. Photo credit: Mark Elliott

Since opening its doors on Jan. 5, a new café in downtown San Diego has been attracting plenty of locals and tourists a like within just their first month of business.

That’s because it’s not an everyday café, but a café with feline companions that keep patrons company.

Located at 472 Third Avenue in downtown San Diego’s Gaslamp district, the Cat Café is merely a few blocks away from the Convention Center trolley stop.

According to the café’s website, the first-ever cat café opened its doors in Taipei, Taiwan in 1998. The cafe became popular with both tourists and locals wanting to enjoy the opportunity to interact with their feline friends.

Since then, cat cafes have spread throughout Asia and Europe.

Cat cafés made their North American premiere in Montreal last year. Oakland was next, followed by New York City. Now, San Diego has followed in line with the spreading trend.

Their wide selection of coffee drinks features espresso drinks from Café Virtuoso and drip coffee from West Coast Coffee Roasters, along with packaged pastries and snack foods. Cat playpen visitors are asked to purchase a drink or snack for entry.

In the United States, the area where the cats are must be completely separated from the area where food and drinks are served, according to Cat Café’s FAQ web page. Three doors and walls were constructed in order to comply, with the third door being put in to keep adopted cats from passing by the serving zone.

“We started construction in the middle of October, and we finally got our approvals all completed on Dec. 21,” Tony Wang, General Manager of the Cat Café said.

On days when large amounts of people are coming through, the cat playpen circulates groups of people over 30 minute periods, while the cats get a 10-minute break in-between said periods of patron circulation.

Throughout the cat playpen, there are a handful of hideaway posts and small blue cardboard boxes for lounging cats to bunker down in, along with various cat toys.

Behind the playpen is a resting room for the cats to enter via cat door whenever the felines want some sleep and privacy.

“That’s where their food, their litter and everything is,” Wang explains. “And that’s where they can go to retreat if they just don’t feel like interacting with people. So it’s kind of like their sanctuary if they want to get away for a bit.”

All of the cats at the café are rescued from shelters and are up for adoption to visitors. Since opening day, “we’ve had 11 adoptions so far,” Wang said.

“The Humane Society kind of sees us as almost like a public foster home,” Wang added. “They can bring the animals here, and hopefully they can get adopted. “

For now in San Diego, it’s the only café where you can both get a good cup of coffee on and support the San Diego Humane Society at the same time.

All tips at The Cat Café will go to the San Diego Humane Society, and all ages are welcome to visit their feline friends.