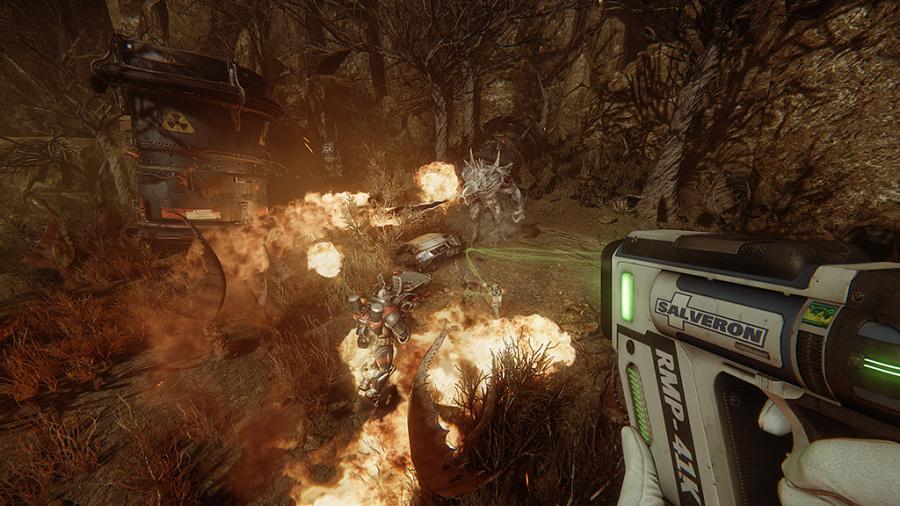 In “Evolve” the player has the chance to choose to play as either one of the four hunters or the giant monster, with each choice having a different objective and outcome. Official image.

The hunter and the hunted. It’s a concept that gamers are too familiar with. From the 1996 PC side-scrolling classic “Hunter Hunted” to Sucker Punch’s stellar 2009 release “inFAMOUS,” this gaming trope isn’t going away anytime soon. Turtle Rock Studios latest release, “Evolve,” takes that concept of hunter and hunted and turns it on it’s ear – in the most interesting way possible. “Evolve” gives a fantastic new approach to multiplayer, hindered only by a lack of a story mode and really captures the feeling of teamwork versus brute strength with its engrossing gameplay.

In this game, there are options of playing one of four hunters or playing as a hulking monster. The four hunters are responsible for taking down the monster before it gets too large and near-unstoppable. As the monster, its job is to feed on wildlife until becoming big enough to take down the hunters single-handedly.

There are four hunter classes. First is trapper, who is responsible for keeping the monster contained within a deployable dome. Assault is the damage dealer acting as the “tank” for the team. Third is support, who provides the team with valuable damage buffs or invisibility. And lastly, the medic, whose primary job is keeping their teammates alive.

The monster has a different objective than the hunters. Monster players begin at Stage 1, able to dish out some decent damage to lone hunters, but are vulnerable if cornered by all four simultaneously. Monster players must hide, using the monster’s heightened sense of smell to find wildlife to consume, building enough energy to evolve to Stage 2 and eventually Stage 3.

At Stage 3, the monster is much larger than it was at Stage 1, able to withstand an ambush against multiple hunters, and becomes a massive threat to any hunter players that don’t coordinate their attacks well enough.

Playing with a group of friends is ideal, as communication is important for strategizing against the monster. Any hunter roaming solo will get left behind and mauled by the monster or even the wildlife.

“Evolve” is remarkable because it encourages the two most common play styles used in multiplayer games. If players prefer teamwork, it is recommended to play as one of the four hunters. But if a player would rather play solo, then the monster might be more to their liking. This is not to say that gamers are forced to play online, as “Evolve” offers a solo mode of sorts.

In solo mode, all remaining characters are played by computer controlled “bots,” so the game can be enjoyed casually and paused whenever a break is needed. The bots are surprisingly intelligent, very closely mimicking human gameplay tactics, which is important for taking down the monster when playing alone.

The game does have its drawbacks. The lack of a proper story mode takes away from a player being able to engage in the universe created by Turtle Rock. A missed opportunity, because “Evolve” has a huge world, full of lively characters and breathtaking scenery.

The other problem with the game is a lack of “real” variation. Sure, there are four gametypes, but the gametypes themselves don’t offer much variety. The only mode that really stands out is “Defend,” where the monster has to destroy a fueling station for a human transport ship in three waves while hunters defend it.

Weak points aside, “Evolve” still has a lot of meat to it that will last players a good month or two before potentially getting stale. The game is best played with a full group of human players, so if you have four buddies that have the game, you’re in for a treat. If you plan to play this game primarily alone, you’ll still have a great time, but you’ll be missing out on the haphazard situations found when playing alongside humans.

Ultimately, “Evolve” is worth a rental, maybe a purchase when it goes on sale, if you are looking for an unconventional multiplayer game that isn’t your standard military first-person shooter.