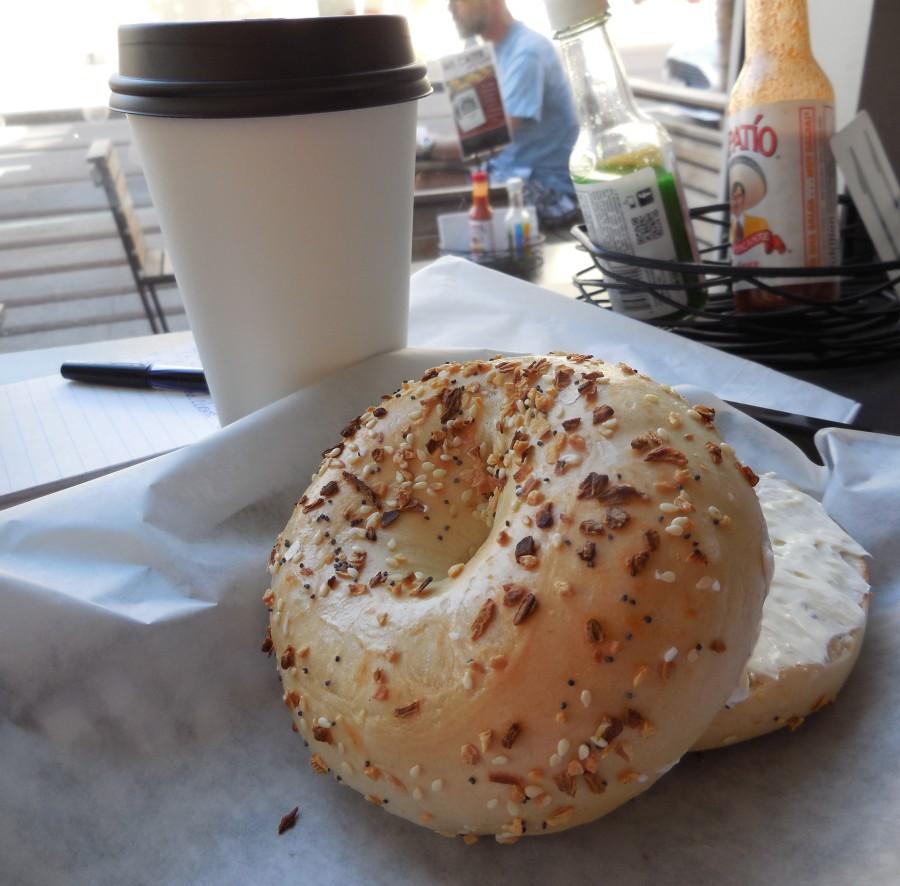 An everything bagel with plain shmear and a large Café Moto Fillip Rally coffee is one of the many choices at Brooklyn Bagel & Bialy. Photo credit: Phoenix Webb

Bagels bought from grocery stores and national chain shops typically taste like baked bread. If the bagels have toppings, then they taste like flavored bread. Add plain or flavored cream cheese and it usually dominates the taste of the bagel.

Joe Gulli is one of three partners of Brooklyn Bagel & Bialy. “It is a bread product, but it’s not supposed to be like French bread,” he said.

Brooklyn Bagel & Bialy has changed the bagel market in San Diego by making their products the traditional way.

Gulli explained their process: batches of dough are made from scratch five or six times a week in the back of the shop, portioned and cut for individual bagels, then set aside to rest. Every morning the baker boils the proofed bagels for a few minutes, rinses and seasons them on both sides before baking the bagels on a burlap covered surface, flipping them halfway through baking.

This process provides a soft and lightly chewy interior of the bagel with a slightly crispy crust that is unmistakably delicious. A bagel at this shop is lightly toasted in order to preserve the incredible interior. The cream cheese never dominates the bagel at this shop, but serves as a wonderful complement.

Whatever product is leftover each day is either sliced into bagel chips or is donated to local food shelters.

Brooklyn Bagel & Bialy is located at 1000 Island Ave. at 10th Ave. on the southeast corner and has been there since April 2011. Outdoor seating is available on each side of the small shop. Indoor seating is a steel counter with four stools and two shorter chairs by the entrance along the wall of windows.

The inside of the small shop consists of the clear bagel and bialy glass case flanked by the espresso bar to the right and the cashier to the left. The far red brick wall hold a cold case of bottled and canned beverages and varieties of cream cheeses. The coffee bar to the left of the cold case features three different kinds of fair trade Cafe Moto, a steel tank of water, turbinado sugar, white granulated and stevia packets, nonfat milk and half and half.

The menu choices are well edited: seven breakfast sandwiches made with free range organic eggs, seven lunch sandwiches, seven soups, sides and salads and 10 espresso drinks. A selection of loose teas sit atop the bagel and bialy case and a few variety of snack chips on display by the cashier round out the menu choices of food and beverage.

What is a bialy? Other than being a bagel without a hole, “The main difference in a bagel to a bialy is the bialys aren’t boiled,” Gulli said.

Gulli continued: “Bialys came about out of Bialystok, Poland — that’s where they get their name bialy. When the Jews were being persecuted during the war and a lot of them went to Poland, because they didn’t normally boil there, they didn’t have the facilities to boil to make the bagels like they did. They came up with just a simple flat bread using the same basic dough recipe just not boiling it.”

Eddie Caronna is a frequent patron of Brooklyn Bagel & Bialy and got the marbled rye bialy with lox spread. “I won’t go anywhere else in San Diego for bagels. No one has a bialy, it’s my favorite breakfast in the city,” Caronna said.

A bagel or a bialy with a shmear and regular sized coffee can cost about $6 plus tax. All the sandwiches range from $6.50 to $8.50. The restaurant is an easy walk from San Diego City College.