Chicano art through the ages 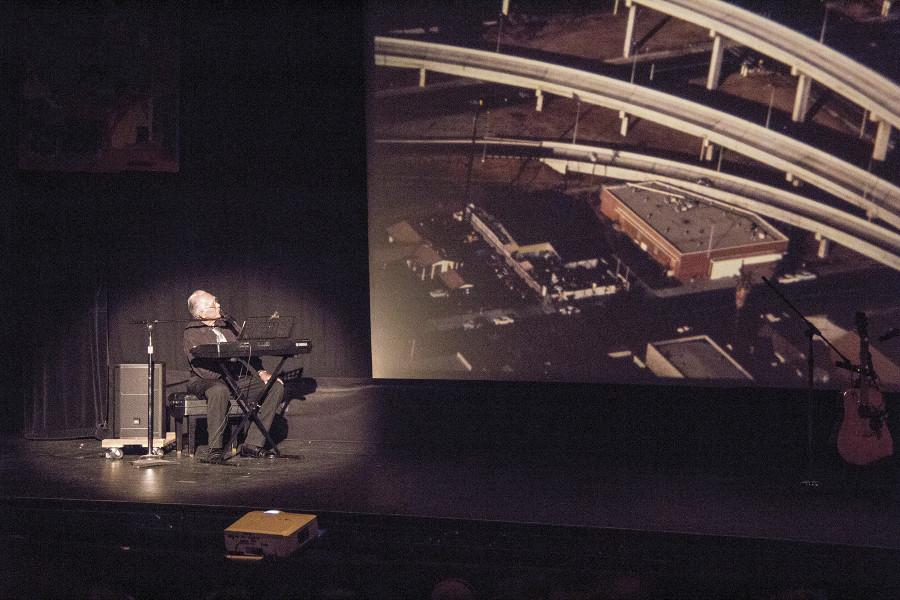 As students, San Diego City College alumni and guests piled into the Saville Theatre, they were hit with the melodic sounds coming from a guitar that belonged to the muralist and artist Salvador Roberto Torres. Not only were guests fortunate enough to hear his talents on the guitar, but the harmonica he had attached to the guitar put the finishing touches to his song that welcomed everyone into the theater.

Aztec dancer Alphonso “Fox” Orozco was dressed in Aztec attire, complete with shells wrapped around his ankles that mimicked sounds of the oceans as he moved. Orozco blew his horn to give the blessing and recited his poem as his offering.

By the time Fox finished the blessing, there was not an empty seat in the theater. It seemed as if everyone was eager to hear the story of the Chicano Movement as a piece of art history.

Torres, a man of many talents, is also an elegant storyteller and a man with many visions. He used one of his many talents to tell the story of the creation of Chicano Park.

Before showing a film titled “Chicano Park,” Torres narrated through a slideshow of what Chicano Park used to be and what it is today. The film was shown to display the trials and tribulations that the artists and volunteers had to go through to create what is now known as Chicano Park.

As part of Hispanic Heritage Month, Chicano Park was given the recognition it deserved. One of the many ways the history was shared was through the film. Of the many images shown through the film, the most memorable were the before and after images shown of Chicano Park. Torres explained the vacant area that was left abandoned under the Coronado Bridge would eventually be a piece of preserved history.

In 1970, the building of the bridge began and it also meant the destruction of many homes and families. Torres’ own home was bulldozed over after the bridge was built.

“I remember as a little boy, staring up at the ceiling and thinking about how my home was gone and what was going to happen next,” Torres said.

Roselie Roman, a guest who attended shared her thoughts of what she felt when listening to the history of Chicano Park.

“I could feel the passion behind the history and art,” Roman said. “It was inspiring to see community members come together and to see the history on the walls of Chicano Park.”

After the homes were destroyed, the place that would later go on to be named Chicano Park was just a pile of rubble, dirt and garbage. From the beginning, the restoration project for it received backlash and empty promises of funding. It got to the point that a former student of City College, Jose Gomez, picked up a shovel and started to dig to make way for the many projects that were soon to come.

Caltran, the company that was responsible for building the bridge, attempted to block the process of building the park and tried to destroy the art that was already created. Due to all the earthquakes California experiences, Caltrans wanted to create a bridge more susceptible to seismic activity by creating cylinder poles to hold up the bridge. This caused some of the artwork to be demolished to make room for the cylinders.

Many artists and City College students came to participate in the restoration project of the park. After everyone’s effort and the help of the community, Chicano Park was registered as a historical monument on March 16, 2013. Despite all of the obstacles that this project had to overcome, Chicano Park is now a permanent moment in history.

Jorge Ramos, a City College student, also shared his thoughts on how he felt about Chicano Park.

“They went against oppression. Chicano Park rose up,” Ramos said.

David Alvarez who couldn’t be in attendance sent his proclamation to make Oct. 8, 2015, Salvador Torres’ Day. It will be a day many City College students, alumni and guests will remember.