The Jibe zombies perform outside of the Haunted Trail 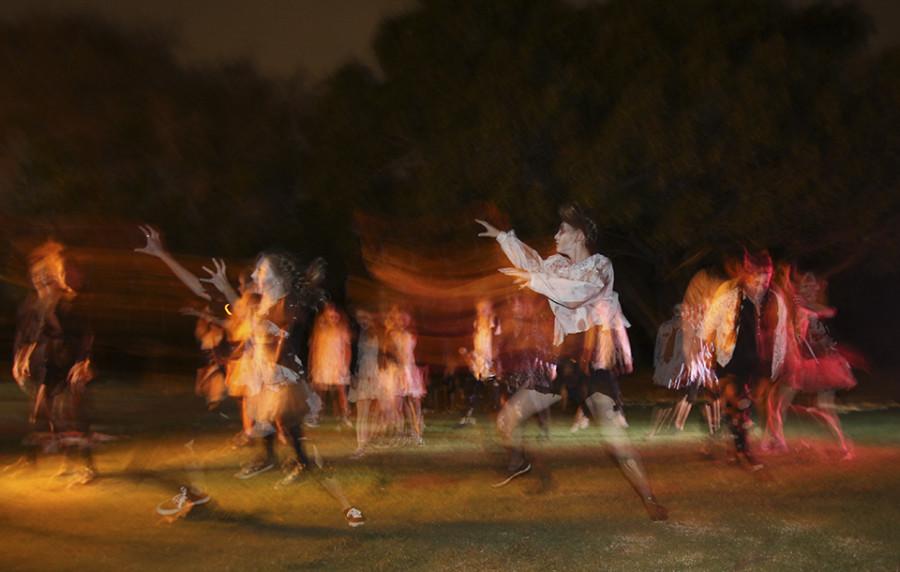 The Jibe dancers, dressed head to toe in zombie attire, greeted guests of the Haunted Trail with a dance routine as they entered the attraction on Oct. 19 in Balboa Park. Led by Jennifer Hill and Abby Neves, the group of 16 zombies bumrushed the crowd of people waiting outside Trail. The undead dancers performed a 15-minute dance routine to Michael Jackson’s “Thriller” and Rihanna’s “Disturbia.” The dancers, who consisted of mostly 10-20-year-old girls and women, fused hip hop, cheerleading and jazz styles for the performance but maintained their zombiefied demures by purposely staggering and displaying monotone expressions throughout the routine. Photo by Mike Madriaga

Just up the street from the City College resides “The Haunted Trail,” located in Balboa Park. The text on its website warns people with heart conditions and prone to seizures to refrain from entering the premises.

“True to form, the Haunted Trail is not for children under 10 or the faint of heart. Experience an outdoor terror that is simply too big to house indoors,” reads the website.

Whether entering through Sixth Avenue by the San Diego Chess Club, or through Nate’s Point where “Cujo”-esque pooches run amuck, the screams of horrified fanatics and chainsaws are crisp. Many parents and younger children who don’t have the guts to enter, are welcome to hide outside on the grass where remnants of the smoke machines and strobes lights from within the trails, ooze out.

Between the two 15-foot monsters outside of the trails is where most of the scaredy cats awaited the return of their loved ones. Some sat on blankets, others stood with their back against the public bathroom walls, but this didn’t protect them from the dormant zombies huddling a few feet away.

Michael Jackson’s “Thriller” started to play, then the 16 zombies bumrushed the crowd.

The children screamed in delight and the parents whipped out their smartphones blinding some of the now agile dancers also doubled as “Necrovates.”

The group of un-dead dancers were lead by Jennifer Hill and Abby Neves, both instructors from Jibe Studios in El Cajon.

“This is our 10th anniversary dancing here, and we have a group that dress up like zombies, and perform a 15 minute show,” said Hill.

Most of the girls (10-20 years old) dancing this night had jazz dance backgrounds. They fused hip-hop and cheerleading elements, but stayed legit to their zombified demures by purposely staggering and maintaining monotone expressions throughout their routines.

The group of dancers then carried one of their own in a crucifix position resembling a sacrifice, to end their performance with Rihanna’s “Disturbia.”

The Jibe zombies entertained their audience with amazing synchronicity, while the killer clowns inside the trails, lured the victims to their bus.

No matter which side of the trails one cowered at, there was never a dead moment.