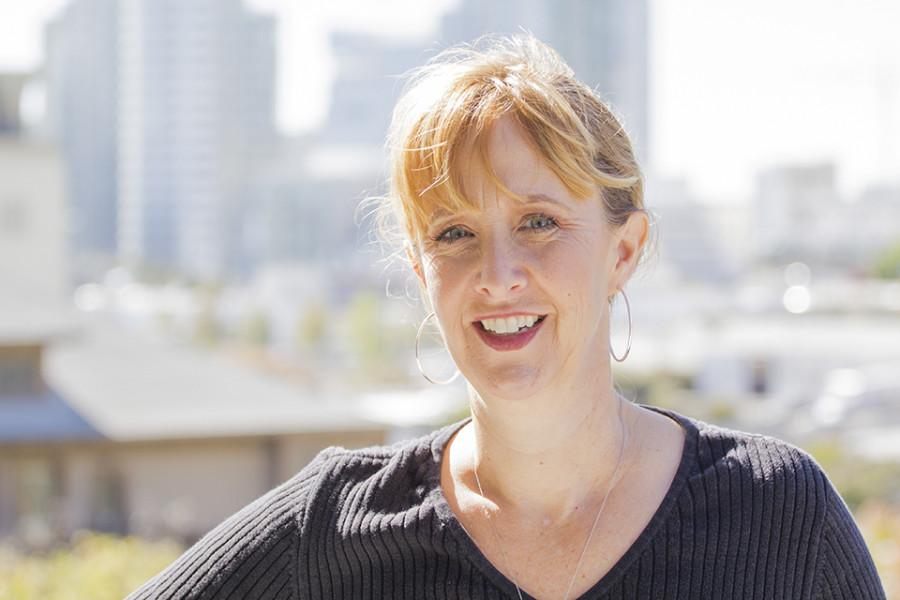 San Diego City College’s Visual and Performing Arts department has a new department co-chair, Katie Rodda, who started in the position as of June of this year.

“I think that she is the perfect person, not only to be co-chair of visual and performing arts, but also to work in concert with Duane (Gardella) and Rob (Norberg) and all of our extraordinary, outstanding adjunct faculty,” Richards said. “I think that Katie is extraordinarily intelligent, very gifted and will bring an absolutely outstanding vision and work ethic.”

City College dance department adjunct faculty Kristen Arcidiacono is looking forward to the changes that she believes Rodda will be making in the theater department during her time as department co-chair.

“I’m really excited about having her breathe a new breath of fresh air into the department,” Arcidiacono said. “I would like to see the musicals continue – I think June did a great job. I think Katie will also be adding some new energy, and I really have a lot of faith in her – I’ve worked with her for a while, and I think she has a lot of enthusiasm and she’s really intelligent, she knows what she’s doing.”

Thus far in her time as department co-chair, Rodda has been working hard against budget and class cuts that are affecting the visual and performing arts classes.

“Our administration is looking to make a lot of cuts to programs, and particularly I feel like visual and performing arts are programs that they have been looking at,” Rodda said. “I’ve been spending a lot of time trying to strategize and figure out ways to keep our programs robust and keep serving the students the best in these sort of austere times.”

Rodda believes that some of the classes being cut in the drama department are being done unfairly based on size, as smaller classes can be helpful in the visual and performing arts. She said that safety can be an issue in some courses, while in others it is important to have one-on-one time with professors — something that she feels is more difficult in larger class settings.

“There are certain reasons that they need to have smaller caps for these classes,” Rodda said. “Sometimes it’s equipment — for example, in one of our music classes there’s a classroom that has only 11 work stations, and so requiring us to enroll 35 students seems kind of ridiculous. In some classes, like our movement for actors class and dance classes, it’s safety, and our stage craft classes as well because they’re using power tools and things like that, so having too many bodies in the space can be potentially dangerous.”

Wilfred Paloma, a student who has been a musical theater major at City College since spring 2014, will be transferring to San Diego State University in fall 2016. His hope for the theater department is that more contemporary pieces will be performed at the college under Rodda’s direction.

“I think that here — the location of this school being downtown and it being so diverse and being a little more accessible to a lot of the people in the community — I think that poses an opportunity to do things that I feel are more new, more progressive,” Paloma said.

Studying the work of female directors Anne Bogart and Tina Landau for her dissertation, Rodda looked at their writing styles of working in a group of people to brainstorm ideas and communally write plays.

“I looked at the link between playwriting and directing and how it is to sort of create a piece as an ensemble and have it go through various rehearsals and changes and workshops before it actually becomes produced,” Rodda said. “I looked at (Bogart and Landau) and stalked them for a number of years and did interviews with them and workshopped with them.”

Aside from acting and theater, Rodda is also passionate about dancing and tries to take classes whenever she is able — her favorite style of which is tap. Arcidiacono said that she has had Rodda as a student in her tap classes before and as a student she is “great. She picks right up and has a lot of nice rhythm.”

“I love dancing — I think I was kind of a frustrated dancer, it was kind of what I wanted to be instead of a musician — so whenever I have the opportunity to go to dance concerts or to take dance lessons, I do,” Rodda said.

Rodda said she is looking forward to producing plays in the campus’ black box theater starting during the spring semester. The theater had been used as a temporary dance studio during the last three semesters during C-building construction and she says she hopes to use the 100-seat space for smaller performances.

A yet to be officially titled “festival of new plays” will be performed in the Black Box Theatre during the first two weeks of March. Rodda said the plays that will be performed during the festival will come from a pool of plays written by City College students during a playwriting class last spring semester.

“We’ll be doing sort of more small, intimate pieces in that space – things that lend themselves to a smaller cast — maybe more adult themes, things that are perhaps a bit more political,” Rodda said. “We’ll still be doing shows in the Saville Theatre, which is our big space and historically we have done musicals, but we’re doing our first straight play in the spring semester, which is going to be directed by Ashley Kobza. That play is called ‘Almost Maine.’”

Rodda said she would really like to present more plays written by Chicano and Chicana playwrights since City College has a strong Latino population. Potential projects that she would like to produce include José Rivera’s magical realism play “Marisol” and Greg Kotis’ musical “Urinetown.”

“I saw it in New York in 2002, and it’s really funny, very dark and it’s sort of like what’s going to happen in a dystopian future during a drought, which is appropriate for California,” Rodda said of “Urinetown.”

Paloma echoes the call for more Chicano- and Chicana-based plays to be produced at City College.

“My first show here was actually ‘In the Heights’ and I’m doing ‘In the Heights’ again at Southwestern and I think pieces like that — especially that speak to themes like immigration and things of that nature, stories like that need to be told so I would hope that that is done,” Paloma said. “I think people are more reactant to a platform that speaks to them.”

Rodda feels that being raised by classical musicians — her father is a church organist, her mother is a pianist and her sister is a cellist — she feels that she was naturally drawn to the field of performing arts. After being in choir and orchestra in high school, she gravitated toward theater in college.

Support from her parents helped her to achieve her educational and career goals and with an almost 2-year-old son at home, she has not had much time to direct as of late, but has advice lined up in case he decides to become an actor someday.

“Oh no, don’t do that, go to med school like I told you to,” Rodda jokingly said, adding “I’d say the thing with theater is it can be so extraordinary, the friendships that you make are so deep and the experiences that you have can be so long lasting … I would tell Teddy, ‘Follow your dream, and if that’s what you want to do I’m going to back you up.’”