Athlete thrives behind the plate and camera 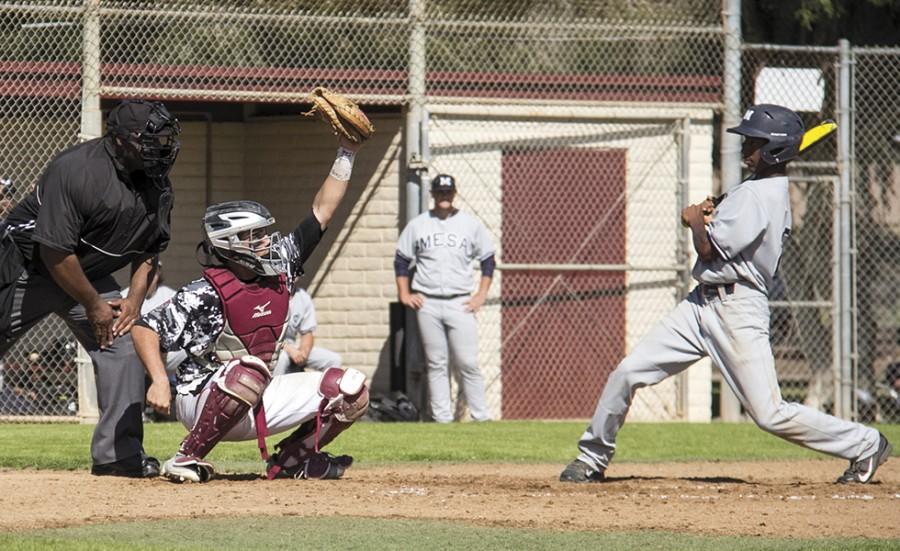 Alex Bentley is the Knights' starting catcher after coming back from a serious injury. Photo credit: Celia Jimenez

City College athlete Alex Bentley is living both of his passions by combining film and baseball into his life.

Bentley, a 23-year-old film major, was cast to act as a San Diego Padre player in Fox’s new series “Pitch.” Not only is he playing a baseball player, he’s one in real life.

He’s the starting catcher for the Knights team and in the past has played for Israel’s National baseball team.

“We all have that part of us that wants to contribute to life and earth and animals and people and we have that sense of purpose. I don’t necessarily feel like I’m contributing when I’m on the set or on the field, but at least I’m doing what I love,” said Bentley at an interview.

When Bentley was asked at what age he started playing baseball, he laughed and said that his family has pictures of him throwing balls around the house before he could walk.

Bentley followed up with a quote from his father that explains his son’s passion for the game.

“I’ve never seen a kid so in love with something that he could sit and not watch but listen to a radio baseball game for three hours and ask not to be interrupted.”

“I remember that vividly,” Bentley continued, “and that’s just been me, listening to Jerry Coleman and Ted Leitner calling Padres games since I was old enough to talk.”

When Bentley was 12 years old, his mother decided to move to her home country, Israel.

Bentley used baseball as an outlet to keep his sanity after moving to a new land. He practiced his skills and was eventually recruited to play for Israel’s national baseball team.

He said he had the time of his life playing ball for that team, but when he turned 18, decided it was best for his career to move back to the United States.

“My real goal is to stay close to the beach, stay close to people I love and who love me and create enough financial security to live comfortably, wake up when I want and to live as I please. That’s the ultimate goal and from there I will figure out contribution and giving back to the world.”

As for his film career, Bentley said he is motivated by the opportunity to change the world through movies. He wants people to feel something after viewing his films.

Bentley writes his ideas for films in multiple journals he keeps in his house, car, baseball bag and backpack. He hopes to tie his passion for film to baseball some day.

Though he plays baseball for City’s team, there was a point in his life where he thought he would never play again. A broken wrist and three surgeries later, at age 18, he decided that he decided to hang up his cleats.

After a few years of focusing on his film work, Bentley, at age 22, decided to get back into baseball and tried out for the Knights program managd by Chris Brown.

“I was lost, just with life. Film was going great… I started a business, everything was great, and then I realized I could do all these things until I’m 60. Baseball is the only thing that has to happen now. That’s was when I made my comeback.”

He’s looking to play baseball for as long as his body allows him to — but also continue to be involved with film for years to come, fullfilling his dual passions.