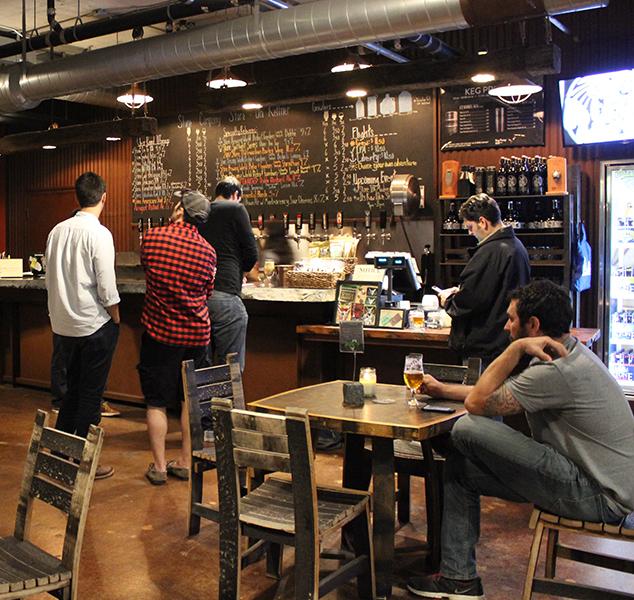 Stone Brewing Company, the ever-expanding brewery that was voted by Beer Advocate readers as number 1 “All Time Top Brewery on Planet Earth” in 2013, has a new tasting room located on Kettner in the nationally registered historic McClintock Warehouse Building.

It is only a short walk away from the Santa Fe Train Station and the Museum of Contemporary Art.

With a rotating cast of beers on tap, it can be a daunting task to choose one. Luckily, we got you covered as we have a couple of beers that you might want to get your hands on.

Stone Enjoy By series is definitely a go to beer anytime you find it on tap. Specifically brewed not to last, freshness is everything for this Indian Pale Ale. Each beer has an expiration date per se and marked for drinking approximately 30 days from each batch’s release. This beer always knocks it out the ballpark. Hoppy, citrusy, full of tropical aroma and flavors, each batch has its distinct flavor depending on release.

Also worth checking out is the Stone Delicious IPA. Indian Pale Ales are the bread and butter of Stone Brewery and this beer combination of lemon drop and hops bring on a magnificent flavor that’s balanced by hop spice. Hops are front and center with just enough sweet malt, keeping it interesting and fresh. This is a go-to standard for anyone not familiar with Indian Pale Ales, supremely tasty but not overwhelming.

Third but not least is the Ruination Double IPA 2.0. The website says Ruination Double IPA was the first full-time brewed and bottled West Coast double Indian Pale Ale on the planet. The second incarnation of the Ruination IPA still bursts with its classic citrusy and tropical essence from the hops. This one is nice and balanced, substantial without being heavy. Clean and vibrant, this is everything that a good West Coast Indian Pale Ale should be.

The real beauty of the Stone Brewery tasting room is the special releases that they have on rotation. While you will have to visit the location website to find out each weeks features. There’s plenty of exciting collaborations to choose from. Particularly, the Xocovesa Mocha Stout which is brewed in limited batches upon its release. Made to mimic the flavors of Mexican hot chocolate with it’s dark spiced chocolate, lingering chile pepper and vanilla notes.

It’s very easy to take chance on a beer that you have no prior knowledge about. Here you don’t have to unhappily sip on your pint regretting the beer you asked to be poured. Stone Brewery offers different size tasters that range from a four ounces to 16 ounces. You can pick and choose whatever you fancy or you can let Stone Brewery do the bidding for you by choosing their in house flights that vary from their classic brews to that weeks tap entries.

Stone Brewery has become an essential stop for the craft beer enthusiast. Offering a different tasting experience that showcase the numerous Stone beers on tap paired with its beautifully decorated patio, that not only incorporates the historic storefront but created a scheme that would blend the interior in to the patio area. Maintaining the vintage look of the old storage units and signage into the stores design.

Great prices, plenty of beers to choose from and a very relaxed atmosphere. Your next stop on your beer tour has been set in stone.