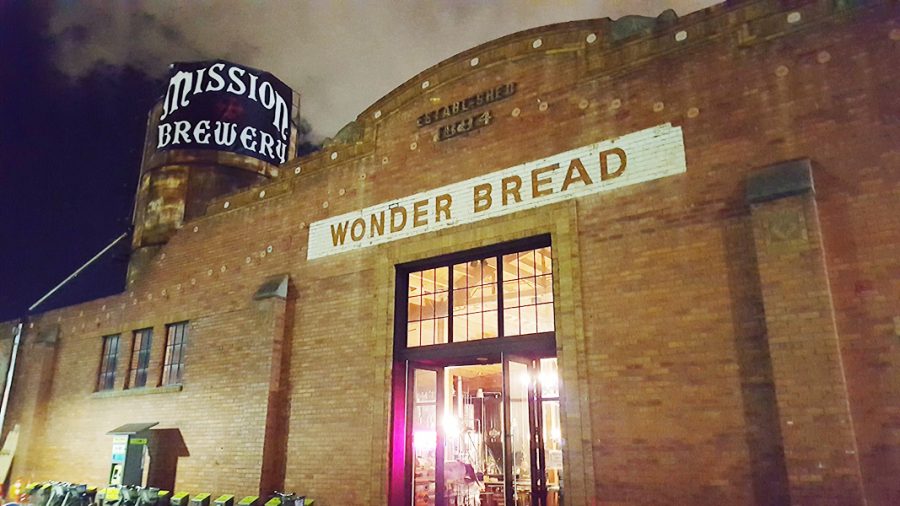 Mission Brewery has its manufacturing and tasting room at the historic Wonder Bread Building next to Petco Park. Photo Credit: Ricardo Soltero.

Mission Brewery, originally established in 1913, has its manufacturing and the tasting room downtown. The compary was re-established in 2007 and it sells its beers in bottles, cans and kegs at its site in the Historic Wonder Bread Building in the East Village.

With an arsenal of flagship and seasonal beers along with craft cocktails, Mission Brewery offers a vast array of options to quench your thirst.

Come game day though, these are the beers that you will need to get your baseball mitts on.

Start with the Shipwrecked double Indian Pale Ale. This IPA drops some intense hop, it drinks like an IPA but has the backbone of a double. With distinct depth and malt character generally not found in many other doubles, this is a much more sweet brew than the commonly expected hoppy explosion.

El Conquistador Session IPA, on the other hand, delivers some citrus notes of lemon and grapefruit with a hint of floral hops. The taste starts with a sharp bitterness that fades quickly into a vibrant finish. Dry, crisp and hoppy all around, this IPA is a perfect beer for a hot summer night.

Rounding out the lineup is the Mission Blonde, this lager-like blonde ale is incredibly light, smooth and delicately dry. Its color would make you believe it’s a pilsner but on taste, its distinct character is of ale. Light and straightforward but very tasty, this solid blonde ale is highly drinkable for all occasions.

Now, here’s a change-up to close out this Mission Brewery guide: The Mission Hard Root beer. This handcrafted twist of a classic soda pop is creamy, smooth and sweet and smells like classic root beer with hints of vanilla and licorice. Delicious and sweet, it’s a wee bit hard to detect its alcohol content but pleasant and very enjoyable.

Mission Brewery is one of the only local breweries in downtown San Diego that offers tours of its facilities. Along the way you will get a quick peek at their beer-making process and production in the former commercial bakery turned brew house. Sadly, the brewery does not have a kitchen but allows outside food, including from the regularly scheduled food trucks that come by nearly every day.

With the architectural bones of the original design, woodwork that cannot be duplicated today and its incredible beer selection, Mission Brewery’s sole location definitely belongs in the big leagues.