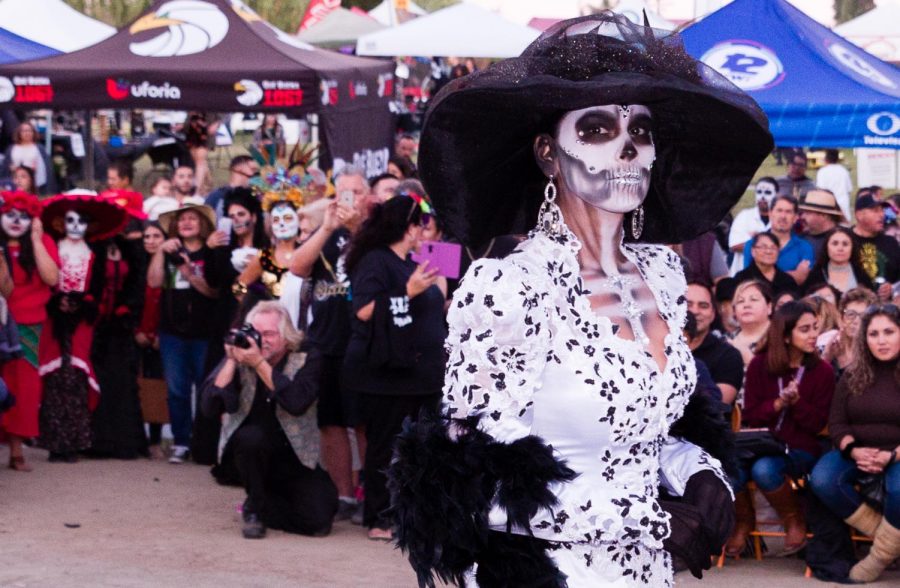 The La Vista Memorial Park and Mortuary organized the ninth annual event on Oct. 20, giving families time to pay their respects in private to those who are laid to rest there on Día de los Muertos, Nov. 1.

The festival at La Vista includes contests for catrina and altars. Among the winning altars, “Viva Las Vegas” was dedicated to those who lost their lives at the recent shooting massacre there. According to one of the designers, Deborah Gentile, “It was kind of hard to figure out how we could show almost 60 people but that was our concept. It was really, really good to be involved with this.”

The border region, by default, is a mix of cultures and the distinction between Halloween and Día de Los Muertos may be difficult to see. Misconceptions about the Day of the Dead celebrations persist.

“Halloween is spooky and fun and goblins and whatnot and the dead. But Day of the Dead is very sacred. It’s with a lot of honor and respect, and remembering our loved ones who have passed, with music, foods, with personal mementoes, by building a tribute for them,” explained Luisa McCarthy, general manager of La Vista Memorial Park and Mortuary.

Why use the skull as the iconic symbol for the feast day?
“Because a skull has no color, it has no sex, it has no religion, it has nothing. It’s just a beautiful soul,” McCarthy explained.

A catrina is an elegantly dressed woman skeleton that is emblematic of Mexico’s Día de los Muertos. And altars are typically built in honor of family members and start, “with their picture on the top. Then flowers, the smell of the flowers, the incense that is burnt… It leads the spirit to their altar. Everything has meaning,” according to McCarthy.

Celebrating and having fun around headstones may seem out of the ordinary given Western culture’s general fear of death. In the U.S.-Mexico border, however, it is as a family reunion. As with other family get-togethers, food and music go hand-in-hand.

“What a beautiful way to remember your loved one in a festive way. Remembering all the beautiful memories, and the food, and you just keep it going with the kids on down to teach them respect, that a cemetery is sacred, that a cemetery is not to be scared [of], that it is part of life,” said McCarthy.

Starting with only 40 people in 2008, thousands now attend the celebration. “People come from all over. And it’s very hard to go to Mexico. It’s probably easier to go from one state of the United States to another as opposed to going to Mexico because it’s very expensive,” according to McCarthy.

Anybody who is undocumented does not have the option of heading south to celebrate Día de los Muertos and the festival in National City allows them the opportunity to embrace and live their culture.

The first place in the altars competition went to “Family Reunion.” The husband and wife team, Zack and Angela Riggs, expressed their thanks that they get to share their son, who has passed, with the La Vista community every year.

“I think it’s a great way to honor your ancestors or anyone who has passed on. They may be gone but they will never be forgotten and this is the day that we get to talk about our own son and we get to celebrate him,” explained Zack Riggs, the U.S.-born father.

“This is a moment of joy as the Mexican and American cultures get together. So, you really understood what the Mexicans meant in celebrating the Day of the Dead. So, there are no barriers, no borders. We can understand each other, so we can work together and do things together.”